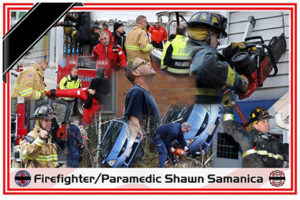 A montage of photos of Shawn Samanica. By Ed Pepin and courtesy of the Fairhaven Police Department.

The Fairhaven Fire Department released a statement confirming the death of 46-year-old Firefighter/ Paramedic Shawn Samanica, who died at his home on Monday, 9/2/19.

The statement only says he died “suddenly,” but the Neighb News has confirmed that Mr. Samanica took his own life after a long battle with depression.

The Fairhaven Firefighters Associa­tion, Local 1555 posted that Mr. Samanica, “could literally fix anything.”

“One of the most mechanically inclined people you could ever meet, he was the go-to guy when we needed something taken apart and put together,” wrote the union. “There was nothing he couldn’t repair!”

Mr. Samanica leaves behind his teenaged daughter Skylar, who he often talked about, according to his colleagues: “About how proud he was of her accomplishments as a student, an athlete and most importantly as a wonderful daughter.”

Firefighter Samanica served with the Fair­haven Fire Depart­ment for over 20 years as a Firefighter/ Paramedic on Shift #4 and was a member of Local 1555 and the International Association of Fire­fighters through­out his career.

“So very sad to hear this. My deepest condolences to Skylar, family, and friends. I will miss you my friend,” wrote Sarah Hennessey Desroches.

“Shawn and I went to the Fire Academy together. He was such a good guy, was lucky our paths crossed a few times over the years. So sad,” wrote Craig O’Malley.

“So sorry for the loss of a great guy, father and friend. Our deepest sympathies to Skylar and the whole family. Our prayers and thoughts are with you during this painfully difficult time,” wrote Alice Almeida Ferreira.

The Firefighters Union offers many services to members who are struggling. Please contact your union rep if you are suffering, or call the National Suicide Prevention Lifeline, 1-800-273-TALK (8255); or visit https://suicidepreventionlifeline.org/