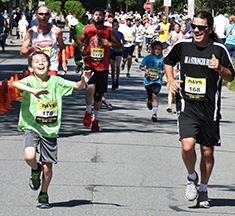 Scot Joseph (right) clearly gets a kick out of the sheer joy on Matthew Joseph’s face as they approach the finish line. Photo by Beth David.

According to organizers, nearly 2,000 people registered to run in the 42nd annual Father’s Day Road Race in Fairhaven. According to official results, 1834 crossed the finish line, 418 in the 10K and 1416* in the 5K.

Last year saw torrential rains, but this year the day was perfect for run­ning, bright and sunny, but not too hot.

Groups of runners wore shirts to identify themselves as running for a cause, or for their particular clubs. The family of Luis Cabral, who was killed in a car accident, leaving behind a wife and three children, wore t-shirts with his photo on them.

His wife, Melissa Cabral, said it was a good activity for her and the children to do on Father’s Day.

“And it keeps his memory alive,” she said. “It keeps our thoughts happy.” 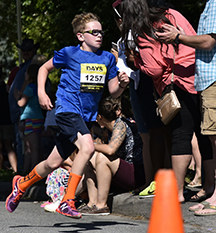 Marcus Reilly is airborne as he takes the final turn before the finish line. Photo by Tori Tepe.

Allen Days thanked the sponsors and the many volunteers for supporting the race, as well as the runners, who make it all possible. He said the race has sent more than $200,000 back into the commu­nity in the form of scholarships and grants to non-profits and municipal groups.

The fun, family event is also a USATF certified course, so it brings out the serious runners and the fun-run/walker types alike. Father-child teams have their own category for prizes. 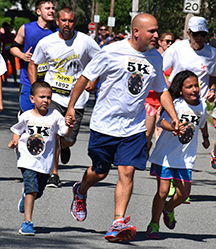