A total of 865 people were transported by EMS to local hospitals last year. Over the past five years, EMS calls in Acushnet have increased by 33%.

The Acushnet Fire & EMS Depart­ment responded to 546 fire department calls in 2016, an increase of 20% over the previous year, another record. Only once before has the department exceed 500 calls. This does not include EMS calls.

According to Acushnet Fire Chief Kevin Gallagher: “In 2016, the Acushnet Fire & EMS Department responded to an unprecedented number of calls. Our apparatus rolled out of our stations 1,551 times. The Fire Division reported 546 incidents to the State Fire Marshal, only the second time calls surpassed 500. The EMS Division had 1,005 patient contacts resulting in 865 people being transported to local hospitals. This is the first time our EMS hit the 1,000 mark! In five years EMS calls have increased by 33%.

“At the heart of each call are the services provided by our staff. From the simplest call (a squirrel stuck behind a refrigerator) to the most challenging (and we have had many over the past few months) our firefighters, paramedics and EMT’s strive to provide exceptional service to each and every individual, at each and every call. My respect for them increases every day and I thank them for their continued competency, compassion and professionalism. This team is quite remarkable.” 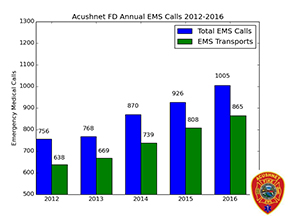