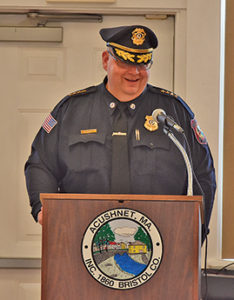 Newly sworn in Acushnet police chief Christopher R. Richmond addresses the crowd at the change of command ceremony on Sunday, 2/9/20, at the Acushnet Council on Aging/Senior Center. Photo by Beth David.

More than 150 people packed into the Acushnet Senior Center on Sunday, 2/9/20, for a change of command ceremony to welcome new police chief Christopher R. Richmond, and give a fitting send-off to retiring chief Michael G. Alves. So many packed the room, that Fire Chief Kevin Gallagher, the emcee for the day, noted it was probably over capacity and asked everyone to note where the exits were.

Patrol officer Michael A. Matton was also sworn in as sergeant.

The speeches were short, and peppered with humor, profundity, and story telling.

In his remarks, Chief Gallagher said that first responders start the job with an invisible bag that is empty. As they go through their days on the job, with every call, they put a stone in the bag. Some stones are larger than others.

He said all first responders carry their bags with them throughout their careers. The bags can get heavy at times, and they may need help carrying them.

Now imagine, he said, that you have to carry the bag of everyone in the department.

“That, to me, is what a chief does,” said Chief Gallagher. “Today, [retiring police chief] Mike Alves gets to put down his bag.”

Although, he said, some stones “stay with you forever.” 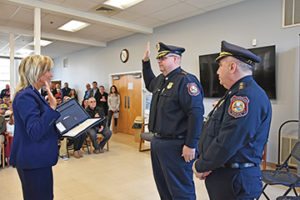 Acushnet Town Clerk Pamela Labonte swears in Christopher R. Richmond as Chief of Police, while retiring chief Michael G. Alves watches, during the change of command ceremony on Sunday, 2/9/20, at the Acushnet Council on Aging/Senior Center. Photo by Beth David.

Now it is the new chief, Christopher Richmond, who will pick up the bags and take on the responsibility.

Selectboard chairperson Roger Cabral said it was “a little over­whelming” when he realized that he would be one of the three people choosing a new police chief for the town. But he credited Mr. Alves with preparing people within the depart-ment to take over.

“We had choices,” said Mr. Cabral.

“You did a great job,” grooming people for the job, he told Mr. Alves.

“We’re not happy to lose Chief Alves,” said Mr. Cabral. “We know the town of Acushnet is in good hands.

Mr. Alves congratulated his successor, and said he would do an “excellent job.”

He said it was family and friends that lighten the load of the bag of rocks that Chief Gallagher talked about.

He also said support from the town, the select­board and various departments, contributed to his success as chief. The job of chief is “hard to wrap your head around.” 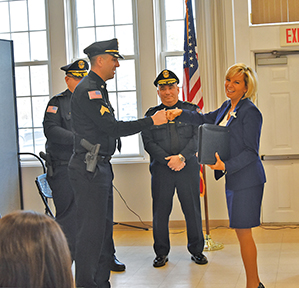 Acushnet Town Clerk Pamela Labonte fist bumps Sgt. Michael Matton after he is sworn in as sergeant at the Change of Command ceremony on Sunday, 2/9/20, at the Acushnet Council on Aging/Senior Center, as newly sworn in Chief of Police Christopher R. Richmond (LEFT), and outgoing chief Michael Alves (CENTER) look on. Photo by Beth David.

“I could not have done the things I did during that time, without your assistance,” said Mr. Alves.

He thanked the Selectboard members from those who hired him to the present board; and he thanked the members of the various organiza­tions and regional groups that the department is part of.

“I have loved the job for 33 years,” said Mr. Alves, and noted that he has served with civilian staff, as well. “I’ve had a fabulous career.”

After he was sworn in, Chief Richmond said he was “overwhelmed and humbled by the number of people” who showed up for the ceremony. He said in the last three months, since he was selected, he has received a “non-stop stream of congratulations and well wishes.”

He noted that he is the third police chief the town has had in 42 years.

Chief Richmond said that his remarks would be a collection of thank-yous because “there is no way I’d be where I am today without the guidance, wisdom, advice, and occasional kick in the pants from many people.”

He said looking around the room, he became “flush with a number of thoughts and emotions.”

“The first one that comes to mind, and I’m not going to lie to you, this is PRET-TY cool,” said the chief. “I say that not because I stand before you as the newly sworn in Chief of Police, but because I never thought I’d ever see such a wide swath of family and friends together in the same room — except maybe at my wake. I find today’s circumstances a much better option.”

The new chief thanked the officers in the department and especially Mr. Alves. 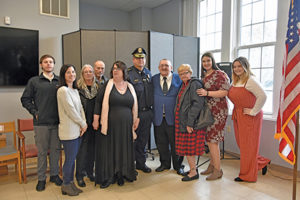 Chief Richmond said when he started in Acushnet in 1995, Chief Alves was sergeant on the night shift.

“His straightforward, no nonsense attitude coupled with his patience and compassion helped shape me as a young officer,” said Chief Richmond, adding that Chief Alves allows all personnel to take on added respon­sibilities, allowing them, and him, to learn new skills. This has left the department with “outstanding personnel.”

“We’re a family, a big family,” said Chief Richmond. “A dysfunctional family at times. But it’s our family.”

“Most of all I would like to thank Chief Alves for his patience and commitment over the past months as he gave me a crash course in the exciting and sexy world of schedul­ing, payroll, billing, grant manage­ment, and all the behind-the-scenes tasks essential to running a police department,” said Chief Richmond. “I also thank Chief Alves in advance for answering my future phone calls whether it be to answer a specific question or simply to blow off steam. A wise man once told me ‘Only a Chief knows what a Chief knows.’ In my short tenure, I’ve already found that to be true.”

He then presented Mr. Alves with a plaque recognizing his 33 years with the department.

In closing, he thanked his family for putting him and his sister Tracy in a position to succeed in life, and always setting family as a priority. He  injected a bit of humor, there, too.

“As I stand in front of you today, I can finally admit that I did really drive to New Jersey with friends after my high school senior banquet in 1987,” said Chief Richmond. “I also paid the citation that was mailed to the house for neglecting to pay the toll on the George Washington Bridge during the road trip.”

“To my big sister Tracy, where do I begin? Thank you for helping me pick out that white tuxedo, complete with top hat and cane, for my eighth grade prom,” he said, and added help with hairstyles and the senior discount he will share with her in the fall.

He also thanked his wife and daughters for the times he brought the job home, and for sacrificing as the job kept him away from home.

Chief Rich­mond said he is excited, anxious, and optimistic to lead the depart­ment through its next chapter, but he is not naive.

“I recognize the challenges law enforcement faces. I am also cognizant how a seemingly benign situation can go bad in the blink of an eye,” he said.

“If I have one fear going forward, it is that I will not live up to the expectations everyone has of me,” he said. “This job is truly an awesome undertaking. That uncertainty how­ever is tempered by knowing I have the experience and expertise of a vast support network in those here today.”

Police officers from surrounding departments, including Fairhaven, where also there in large numbers.

After it was all over, Chief Richmond said he was “elated and truly overwhelmed” by the turnout. He said former colleagues from all over the state were there.

“I’m very proud of him,” said his wife Dionne. “I know the work he put into this. It’s rewarding that he’s being recognized for that by becoming police chief.”

Officer Michael Matton also was promoted to sergeant during the ceremony.

“I’m very happy to get the chance to lead the department under the direction of the new chief,” said Sgt. Matton. “He’s a great leader. I will take the lead from him.”

Mr. Alves’s mother Pat was there with some of her friends. She said she was “very happy” for Chief Richmond and her son.

“This is a big deal in this town,” said Carole Hall, about why she was there. She said she was sure the new chief would do a good job for the town.

Lisa Alves, the retiring chief’s wife laughed out loud when asked if it will be difficult having her husband around the house all day.

“I don’t know because I work,” she said, adding that Mike is already painting and working on house projects.

“He can make supper more often,” she said, adding that he has already been doing that, too. •••