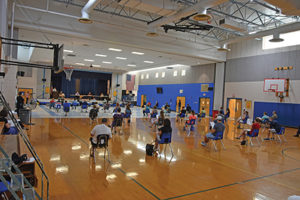 Chairs are spaced six feet apart at the Acushnet annual Town Meeting in the Ford Middle School auditorium on 6/20/20. Photo by Beth David.

Acushnet held its annual town meeting on Saturday, 6/20/20, in the usual place and in person, but it was definitely not the usual way. The room was set up for social distancing, with chairs six feet apart, and the warrant was stripped down to the bare mini­mum, devoid of any controversial subjects.

The Selectboard had taken advantage of an emergency order that allowed towns to temporarily lower their TM quorum to 10% of their regular number. In Acushnet’s case, the 75 person quorum could go as low as eight. The board lowered it to 10, and 62 people showed up.

The order also required that no controversial articles be included.

There was no discussion on the budget, and no opposition. The original amount requested by the departments was $31,887,365, but the vote carried for the Finance Commit­tee number of $30,762,685.

Town Meeting also voted to fund the golf course with no discussion and one opposed. At the end of the meeting, however, Tyler Magalhaes asked to be heard, saying he had a question on that article, but did not have the opportunity to speak.

Town Moderator Nicholas Gomes allowed Mr. Magalhaes to speak, but noted that the vote had already been taken and, he said, could not be revoted.

Mr. Magalhaes asked if the golf course lost money because of the $100,000 taken from the reserve fund. 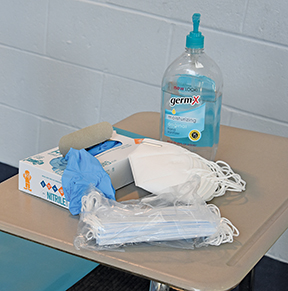 Selectboard member Kevin Gaspar explained that the golf course was operated to break even.

“That’s anticipated revenue,” said Mr. Gaspar, adding that they have always met the target. If it is short, they will appropriate more at town meeting.

He said each year was different. Last year the golf course had a surplus, and the reserve fund had about $400,000 in it.

“We’ve been doing pretty well over there since it opened,” this year, said Mr. Gaspar.

Town Meeting voted to approve all articles without discussion, except for the floodplain bylaw article, which was withdrawn.

Town meeting approved the Stormwater Management Bylaw with no discussion and no opposition.

The Floodplain Overlay District article was tabled because the Federal Emergency Management Agency, which had required the town to pass the bylaw, rescinded its decision to require the vote by July.

A general article appropriating the funds from the Community Preserva­tion Act into the appropriate categories also passed with no discussion, but did have one or two opposed.

Town Meeting also approved $80,000 from the Community Preservation fund for the Little Toy Project, a playground located at the school property at 800 Middle Road; and $2,000 from CP funds for painting and landscaping at the historic fire station at 1130 Main Street.

The final article was a Resolution of Gratitude to more than 50 people for their “substantial contributions” to the town over the last year. 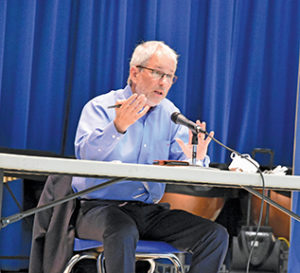 Selectboard chairperson Roger Cabral, who is not running for re-election, made a point of thanking people for attending. He noted that having a town meeting on a Saturday was an “experiment.”

“The turnout her is amazing,” said Mr. Cabral. “On a Saturday, 82 degrees when the sun is shining in the middle of a pandemic.”

He also explained that they made adjustments to the warrant to keep it simple, and no controversial subjects, and they lowered the quorum to 10.

He said they did not want anything on the warrant that would force people to attend.

“We really don’t know what  revenue’s going to be here next year,” said Mr. Cabral.

He said they asked all departments to cut 1.5%.

“It doesn’t sound like a lot,” he said, but when they are already operating on a “bare bones” budget, it is hard to do.