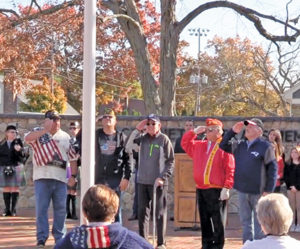 Acushnet held a Veterans Day ceremony at the town’s Veterans Memorial on 11/11/21.

Selectboard Chairperson David Desroches noted that last year’s event was canceled, saying he was glad they could be there.

Mr. Desroches said he was humbled to be in the presence of veterans, “Someone who wrote a blank check to the United States.”

He said everyone knows at least one veteran who served with honor, others know some who never returned. Still others know some veterans who returned scarred, physically, emotionally, or bother.

“We meet in quiet remembrance of an historic day,” he said, November 11, 1918, which not only signified the end of World War I, it signified “the beginning of peace.”

“In world tormented by tension and the possibilities of conflict, our experiment continues in our present day, still imperfect, still short of its responsibilities,” said Mr. Desroches. “But it does offer hope that some day nations can live in harmony.”

Veterans Day is the day to thank all veterans, he said.

“We cannot and should not take free­dom and liberty for granted,” he said.

He quoted past national VFW Com­mander Richard Eubank: “Remembering the true meaning to sacrifice and service, millions of American lives were forever altered because they donned the uniform to protect the freedoms and rights we take for granted. We owe an eternal debt of gratitude to them. And acknowl­edging veterans day is the time that debt comes due. It’s our way of keeping faith with our former defenders.”

Turning to the crowd, Mr. Desroches said, “And to all the veterans standing here in front of me, I thank you for your service.”

The ceremony included several songs with bagpipes and drums, taps, the National Anthem, and other prerecorded songs, and the reading of the last letter of Union Army Major Sullivan Ballou of Smithfield, RI, “My Very Dear Wife.”

“Never forget how much I love you, nor that, when my last breath escapes me on the battlefield, it will whisper your name,” wrote Major Ballou to his wife.

To see the whole ceremony, visit the town of Acushnet YouTube page at https://www.youtube.com/ watch?v=x8WO8eSA8Rw. To read the full text of Major Ballou’s letter, visit https://www.nps.gov/articles/-my-very-dear-wife-the-last-letter-of-major-sullivan-ballou.htm