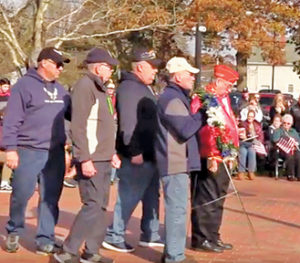 Veterans representing the five branches of the US military place a wreath by the flagpole at the Veterans Day celebration held at the Acushnet Veterans Memorial on 11/11/19: Joe Costa, representing the Army; Cliff Hathaway for the Marines; Gil Cabral for the Navy; Tom DaCosts for the Air Force; Maurice Pepin for the Coast Guard. Photo from Acushnet Cable TV video.

The town of Acushnet held a Veterans Day ceremony at the Veterans Memorial on Main Street, that included a little speechmaking, the release of doves, and patriotic songs on Veterans Day, 11/11/19. A scheduled flyover by a Coast Guard helicopter was cancelled due to “mechanical difficulties”, said Select­board chairperson Roger Cabral, who emceed the event.

Mr. Cabral started by noting that this year marks the 100th anniversary of the end of World War I. One year later, President Woodrow Wilson created Armistice Day. In 1954, the name was changed to Veterans Day to also acknowledge the veterans from WWII and the Korean conflict.

Mr. Cabral told the crowd that he thinks of his grandfather on veterans day. He served in WWII and served as a gunner on a B25.

Mr. Cabral asked the crowd to think about how it must have been for his grandfather to leave his home, the he had probably never traveled far away from, to go overseas to fight. He left his wife and a nine-month-old daughter, Mr. Cabral’s mother.

Mr. Cabral said he found many items among his grandfather’s possessions, although he has no idea of the signficance of any of them. There is a piece of shrapnel, a Japanese sword, some medals, some coins.

His grandfather told him that he found the sword in the jungle, but, said Mr. Cabral, he believes he never got the true story of that sword.

Mr. Cabral read the separation letter that Mr. Lussier received from the Secretary of the Navy.

“I want the Navy’s pride in you, which it is my privilege to express, to reach into your civil life and to remain with you always,” read Mr. Cabral. “You have served in the greatest navy in the world.” 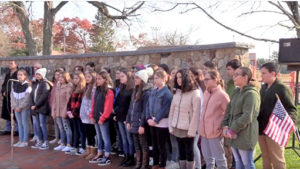 “They pressed two enemy fleets at once, receiving their surrenders only four months apart. It brought our land-based air power within bombing range of the enemy, and set our ground armies on the beach­heads of final victory,” con­tinued Mr. Cabral. “It performed the multitude of tasks necessary to support this military opera­tion. No other navy at any time has done so much. For your part in these achieve­ments, you deserve to be proud as long as you live.”

Mr. Cabral noted, at that point, that the letter was “to all our veterans.”

Miss Apple Peach Tori Kalisz led the crowd in the pledge of allegiance after the flag was raised by veterans. She also gave a “hugh thank-you to all our veterans who have served, are serving, and will serve in the future.”

She said the service is appreciated and “we all take pride in you serving our country so well.”

Mr. Cabral also read a famous letter by Sullivan Ballou, who was from Rhode Island and served in the Civil War as a major in the Union Army. His letter was found after his death, and highlighted in a documentary by Ken Burns, PBS.

“My very dear Sarah: The indica­tions are very strong that we shall move in a few days — perhaps tomorrow. Lest I should not be able to write again, I feel impelled to write a few lines that may fall under your eye when I shall be no more,” reads the letter. “I have no misgivings about, or lack of confidence in the cause in which I am engaged, and my courage does not halt or falter. I know how strongly American Civilization now leans on the triumph of the Government and how great a debt we owe to those who went before us through the blood and sufferings of the Revolution. And I am willing — perfectly willing — to lay down all my joys in this life, to help maintain this Government, and to pay that debt.”

Major Ballou writes about his “deathless” love for Sarah.

“…it seems to bind me with mighty cables that nothing but Omnipotence could break; and yet my love of Country comes over me like a strong wind and bears me unresistibly on with these chains to the battle field,” reads the letter.

He continues about their “blissful moments” and his gratitude for having them.

“And hard it is for me to give them up and burn to ashes the hopes of future years, when, God willing, we might still have lived and loved together, and seen our sons grown up to honorable manhood, around us,” reads the letter. 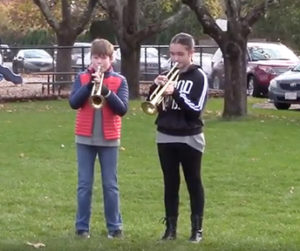 Major Ballou writes that if he does indeed die on the battlefield, he will whisper her name with his last breath, and asks for forgiveness for his faults.

“How thoughtless and foolish I have often times been!” he writes. “How gladly I would wash out with my tears every little spot upon your happiness.”

He writes that if the dead can come back to earth, “and flit unseen around those they loved, I shall always be near you; in the gladdest days and in the darkest nights…always, always, and if there be a soft breeze upon your cheek, it shall be my breath, as the cool air fans your throbbing temple it shall be my spirit passing by. Sarah, do not mourn me dead; think I am gone and wait for thee, for we shall meet again.”

Sullivan Ballou was killed a week later at the First Battle of Bull Run, July 21, 1861. To learn more about Major Ballou, visit http://www.rihs.org/mssinv/Mss277.htm and https://www.pbs.org/kenburns/civil-war/war/historical-documents/sullivan-ballou-letter/

The program also included the Ford Middle School Chorus singing the Star Spangled Banner; the Holly Briar Pipers bagpipers playing several selections; and taps by middle school students Bryce Cannon and Aubry Amarao. Five veterans, each representing a branch of the US military, placed  wreath at the flagpole:  Joe Costa, representing the Army; Cliff Hathaway for the Marines; Gil Cabral for the Navy; Tom DaCosts for the Air Force; Maurice Pepin for the Coast Guard.