Acushnet Town Meeting passed a $32+ million budget plus some capital spending items on Monday, 5/10/21, albeit with some rather heated discussions on some items.

The most passionate discussion surrounded the school budget. The district asked for a 2.6% increase from last year for a total of $15,460,066. But the Finance Commit­tee recom­mended level-funding the district at last year’s amount of $17,073,651, not including Old Colony tuition ($2,109,632).

The Finance Committee defended its decision, saying that the schools had a $700,000 surplus.

Superin­tendent Paula Bailey explained in a follow-up phone interview that the surplus was larger than usual due to COVID-19. She said there are transportation costs that did not get spent, but they are still negotiating with the bus company; the schools received a lot of grant money for COVID related costs; and there was payroll money that did not get spent because positions were not filled. They did not, for example, fill an assistant principal position because of the pandemic. Other costs were also down because not as many students were in the building.

Dr. Bailey said they are not allowed to roll that money over to the next fiscal year, they have to return it to the general fund.

School Committee chairperson Jennifer Downing told Town Meeting that the proposed increase was modest and “reasonable and consistent” with past budgets. She said it took into account the learning loss and other challenges students face and will continue to face due to COVID-19, and includes positions such as a reading specialist, academic coach, and improved curriculum.

“We’ve known for several years that our curriculum is outdated and does not have the level of rigor to position our children to be competitive and successful as they move into high school. All of these issues have been discussed in detail at public school committee meetings,” said Ms. Downing. “I was disappointed and frankly shocked to learn that the finance committee disregarded the district’s recommendations and level funded the budget this year. Even worse, we were the only department in town that was level funded.” 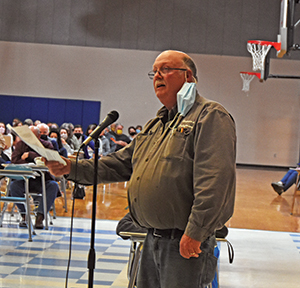 She called the decision “irrespon­sible” and said it will have a detrimental impact on the town’s greatest assets: the school and children. People do not move to Acushnet to get a job or start a business, she said. They move to town to raise a family because of the school system.

“If you keep disinvesting in our schools as we’ve been doing now for several years, people will no longer choose Acushnet,” said Ms. Downing. “Our children deserve the right to a quality education and, in a town like Acushnet, it’s disgraceful that we need to be fighting this battle.”

Dr. Bailey said the FinCom decision was insulting to the School Commit­tee, which sets the budget, and it was based on two meetings with FinCom.

She said she did a survey of surrounding towns and found that 94% were getting an increase. She said Acushnet will be in the small minority that will not get an increase.

“I believe Acushnet is better than that,” said Dr. Bailey, adding that students get “one chance at each grade level,” and the town cannot afford to put it off.

FinCom member Susan Delgado said the decision was not something they took lightly.

“We care about this town and that’s why we do what we do,” said Ms. Delgado.

She said the police cruiser was taken out last year, but can not be put off again, and she noted some lower spending in the school district. She said $510,000 less in spending is not explained. She also said that the town has the money this year due to COVID relief funds. It is not sustainable she said, “That will not last forever.”

Town Meeting also approved Article 10 for a number of capital expenditures totalling $508,000 for equipment for the police and fire departments and a new loader for the DPW.

“We’re spending money like gang­busters,” said Norman “Norm” Fredette, who opposed the $285,000 for a loader for the DPW. He said they should approve the next article instead, which would have appropriated $90,000 to fix the old loader. “We’re spending money here like a drunk.”

He noted that at the last town meeting the argument was that the town might need a second loader for big storms, and he said during Hurricane Bob the town “comman­deered” his loader, arguing they could do that again.

“I’m going to trust Mr. Menard (of the DPW), said Sarah Gomes, adding that if he says he needs a new loader, he must be putting “a ton of work” into the old one.

Mr. Fredette insisted that a road grader would be a better way to spend the money. He also said that if the town did buy a new loader that the old one should go up for auction and not be given away to a “friend of a friend.”

Selectboard member Kevin Gaspar said he, too, would like to see the public auctions return, instead of items simply declared surplus and sent to the town barn for anyone to take.

Town Meeting also approved alloca­tion of Community Preserva­tion Act money; and approved $25,000 in CPA funds for the soccer fields at the elementary school and $10,000 for the basketball courts at Pope Park.

Town Meeting also established an Infrastructure Capital Expense Stabiliza­tion Fund with $500,000 from free cash for use on streets and sidewalks, water and sewer infrastructure, etc.

In other articles, Town Meeting:

• Approved spending for all enterprise funds, including a new one for the public works depart­ment for the recycling center.

• Passed article 12 to spend $20,000 from free cash to hire a professional appraisal company to perform comprehensive individual appraisals of industrial use properties.

• Passed article 13 to spend $25,000 from free cash to hire a consultant to review the town’s zoning bylaws.

• Passed article 14, totaling $117,000 from free cash for a variety of capital improvements to the school buildings.

• Passed several zoning bylaws and changes, including the Stormwater Management Bylaw; the Floodplain Overly District required by the Federal Emergency Management Agency (FEMA); a common drive­way bylaw for retreat lots; a new bylaw section requiring materials to be stored inside or screened from neighbors; an upland circle minimum bylaw, which would mostly affect the village district; a soil conservation bylaw that will allow the town to better regulate PJ Keating’s operations; a bylaw to close town hall on Saturdays and move any deadline dates to the next business day.

Town Meeting tabled a bylaw that would have changed the definition of a “street or way.”