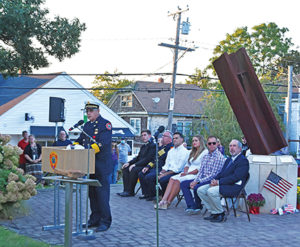 The overriding theme of Acush­net’s 9-11 ceremony on the 20th anniver­sary of the attacks was “Acushnet will always remember.”

Fire Chief Kevin Gallagher noted that this year is also the 10th anniversary of the creation of Acushnet’s 9-11 Memorial. He has been posting photos and other details on Facebook, recounting the creation of the memorial in 2011.

“There’s something special about this day,” he said.

He noted that the song they started with was a U2 song, “Hands that Built America,” a tribute to immigrants who build skyscrapers. He said the ceremony that day would be a tribute to the Acushnet hands that built the memorial.

Miss Apple Peach Tori Kalisz sang the National Anthem and the Boy Scouts of Troop 11 led the crowd of several hundred in the Pledge of Allegiance to get things started.

He called all those who were killed “patriots.”

“Firefighters, police, EMTs, workers from stockbrokers to custodians, the true fabric of America, died that day,” said Mr. Desroches, adding that we should not forget our military personnel who defend our liberty and are the “reason we stand free from tyranny and oppression.”

He said the memorial is a reminder to future generations of the tragedy of that day, and he read the numbers of those who were killed that, numbers that are etched in the memorial.

Chief Gallagher pointed out a project by Acushnet resident Jayden Taylor a Project 351 student, who painted rocks with the names of “local heroes” and those killed in the 20-year war on terror. Chief Gallagher said Ms. Taylor “very quietly” placed the rocks in an “unassuming way” earlier in the week. 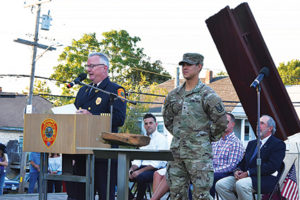 Acushnet Fire Chief Kevin Gallagher announces the hiring of newly minted Acushnet Firefighter Ben Sonnenburg on 9/11/21, a surprise to him that he was just then hired, during the 20th anniversary remembrance of the 9-11 attacks at the Fire Station at Parting Ways. Photo by Beth David.

Acushnet Fire Chief Kevin Gallagher watches as newly minted Acushnet Firefighter Ben Sonnenburg signs his employment papers on 9/11/21, a surprise to him that he was just then hired, during the 20th anniversary remembrance of the 9-11 attacks at the Fire Station at Parting Ways. Photo by Beth David.

Chief Gallagher then surprised Ben Sonnenburg, a member of the US Army, by hiring him on the spot as a Call Firefighter. Chief Gallagher noted that Mr. Sonnen­burg was nine months old when the 9-11 attack happened.

Chief Gallagher said he was “struck” by Mr. Sonneburg’s character when he knocked on the door and met with the chief.

Mr. Sonnenburg signed his employ­ment papers at the ceremony, establishing his “date of hire” as 9/11/21.

Chief Gallagher told Mr. Sonnen­burg he would learn of many traditions. Then he explained that the “fire signal” tradition was started in 1870 in New York. A bell is rung five times, paused, then five times, paused and five times again, to announce a line of duty death.

Chief Gallagher recounted the steps to creating the memorial, including a unique building permit issued by Building Commissioner James Marot.

“I don’t know if building permits can be beautiful, but this one is,” said Chief Gallagher.

For fee paid, Mr. Marot wrote “2977 lives.” In Area of Structure, he put: “equal to the hearts of all Americans.” Next to “owner” he wrote “Acushnet Fire Department and all Residents of Acushnet.” For Estimated Value, he wrote “priceless.” After Conditions of Permit he wrote, “Eternal remem­brance of all who lost their lives by Terrorists from a foreign land.”

Chief Gallagher said he came across the permit as he was looking for some photos.

“I was absolutely touched 10 years ago when you handed this to us,” said Chief Gallagher to Mr. Marot. “And was equally touched when we printed it out 10 years later. So thank you, Sir. Thank you for your kindess.”

Acushnet resident Roger Nadeau also spoke at the event, explaining how he came to create a special truck for transporting the remains of fallen firefighters. The truck was also used to transport the 2977 pound steel beam used in the Acushnet memorial from Fairhaven to Acushnet.

Mr. Nadeau, now retired, served in the Acushnet Fire Department, and rose through the ranks in New Bedford to become Fire Chief there. His brother Gerry was also a firefighter and died in the line of duty from lung failure.

Mr. Nadeau said he always wanted to build a fire truck, and he was involved in the National Fallen Firefighters Associa­tion. He said they helped with some funerals, but there were not many good trucks. One year they did three funerals: one truck ran out of gas because the gas gauge was broken.

He eventually got one from the Town of Weymouth, which donated it to the foundation he created in his brother’s name.

They made it into a memorial truck. They also got a small piece of steel from 9-11, to keep on the truck.

He also told the story of getting permission to put Father Mychal Judge’s picture on the truck. Fr. Judge, the chaplain for the New York Fire Deparment, is listed as the first recorded casualty of the 9-11 attacks on the World Trade Center.

Mr. Nadeau had to meet with Fr. Judge’s twin sister. She allowed him to take a picture and gave him Fr. Judge’s badge, which travels with the truck. Mr. Nadeau said the badge has healing properties, and he is documenting the healing stories of the badge.

Chief Gallagher called Fr. Judge one of his heroes. He encouraged people to read anything they can find about him. A flawed man who wrestled with alcoholism, Fr. Judge earned the loyalty of every member of the FDNY. He went to the towers, aware of the danger, even though he did not have to be there.

“He earned the respect of the firefighters of New York and they loved him, despite his failings,” said Chief Gallagher.

He also said that media outlets often ask for comment because of the memorial. He said it “always” comes back to the community; it was a com­mu­nity effort. And he thanked the many people involved in creating the memorial and keeping it maintained.

He said there were many different levels of involvement and named the many people who helped design and construct the memorial.

Chief Gallagher concluded by thanking the police department noting how their job is challenging, especially on yard sale Saturday. He also thanked the fire and EMS department, and the public “for supporting this memorial, for loving this memorial, and thank you for the years of support of our department.”

James and Andrea Souza attended the event because Ms. Souza lost a cousin in New York on 9-11. Mr. Souza said they attend the ceremony every year.

“The feeling is still the same,” said Ms. Souza.

“People who lost their lives are still loved and should be recognized,” said Mr. Souza.

Elizabeth Pell was there with her young grandsons, Ben and Eli, so they could have some idea what happened on 9-11 and learn a little of the history, and “how sad and heartbroken we were.”

“And we are so lucky to be able to be together, and how people died because of wrongdoing,” said Ms. Pell. “

Ben said he had some idea of what 9-11 was, but both boys were too young to have learned about it in school yet.

“I love learning about it,” said Ben, adding that he hopes to visit the memorial again.

Eli said he understood that people died because of what other people did.

The ceremony also included an invocation by Fr. Ryan Healy of St. Francis Xavier church; the singing of several songs, including the National Anthem by Miss Apple Peach Tori Kalisz; placing of a wreath by the memorial by Firefighter Paul Frysinger and his son, Mason; remarks from Rep. Chris Hendricks. 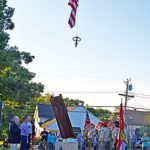 Boy Scouts from Troop 11 Acushnet lead the Pledge of Allegiance on 9/11/21 during the 20th anniversary remembrance of the 9-11 attacks at the Acushnet Fire Station at Parting Ways. Photo by Beth David. 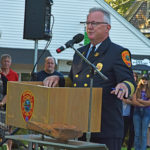 Acushnet Fire Chief Kevin Gallagher speaks on 9/11/21 at the Acushnet 9-11 Memorial at the Fire Station in Parting Ways for the 20th anniversary remembrance of the 9-11 attacks. Photo by Beth David 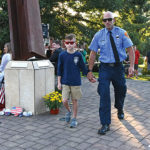 L-R: Mason and his dad Firefighter Paul Frysinger walk back after placing flowers at the Acushnet 9-11 memorial on 9/11/21 during the 20th anniversary remembrance of the 9-11 attacks at the Fire Station at Parting Ways. Photo by Beth David. 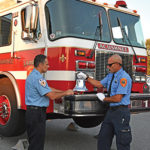 Acushnet Firefighters ring the bell 5-5-5 times, a traditional code tapped out when a firefighter is killed in the line of duty, on 9/11/21 during the 20th anniversary remembrance of the 9-11 attacks at the Fire Station at Parting Ways. Photo by Beth David. 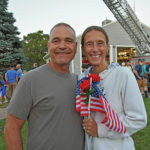 James and Andrea Souza attend the 20th anniversary remembrance of the 9-11 attacks on 9/11/21 at the Acushnet 9-11 Memorial at the Fire Station in Parting Ways. Ms. Souza lost a cousin in the attack on the World Trade Center. Photo by Beth David. 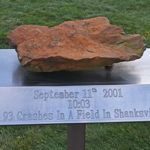 A stone from the field in Shanksville, PA, the site of the crash of Flight 93 on 9/11/01, is part of the Acushnet 9-11 Memorial at the Fire Station in Partying Ways. Photo by Beth David. 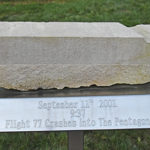 A piece of the Pentagon from the destruction caused by Flight 77 crashing into it on 9/11/01 is part of the Acushnet 9-11 Memorial at the Fire Station in Partying Ways. Photo by Beth David.