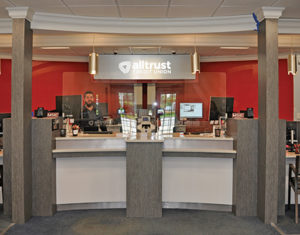 Robert Dos Reis, Branch Manager at Alltrust Credit Union in Fairhaven, staffs a teller “pod” in the new lobby, which replaces the old layout as part of a total rehab of the building at 123 Alden Road. Photo by Beth David.

We all know change can be hard, but it can also be exciting. In any case it’s mostly necessary.

Anyone driving by the new Alltrust sign on Alden Road in Fairhaven has figured out that change is afoot. But, not as much as they might think.

The former Southern Mass Credit Union did not get sold and did not merge, assures President and CEO Carmen Sylvester. It is simply a name change, and a whole lot of upgrades to go with it.

The process took at least a couple of years: just picking the name was a long process involving the board, trademarks, etc., etc., etc.

Ms. Sylvester said having “southern mass” in the name seemed to limit them in the eyes of the public. The credit union can accept members in parts of Rhode Island. Membership is open to everyone who lives, works, or attends school in Bristol, Barnstable, Dukes, Nantucket, and Plymouth counties in Mass.; Bristol and Newport counties in Rhode Island; and parts of Providence County.

“It’s a mental thing,” said Ms. Sylvester that people outside of southern Mass. would just naturally assume they could not join. The new name positions them for further growth and opportunity.

The name “Alltrust” says all that they want it to say, said Ms. Sylvester. “All” means they service everybody in their geographic area.

“Trust” means, “we want to do the right thing,” she said.

And it takes away the bound­aries of a name tied to geography.

Of course, a credit union in general will always have some geographical boundaries, but they 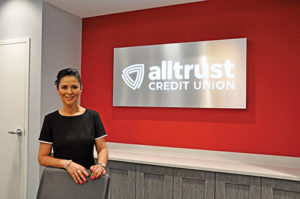 Carmen Sylvester, Alltrust Credit Union President and CEO, poses next to the Alltrust logo in the new conference room in the building that is being completely renovated to upgrade offices and use space more efficiently. Photo by Beth David.

are working to expand them all the time.

The new name is perfect for an organization looking to expand, and not just geographically, but assets membership, and services.

The new name comes along with a total renovation of the building. Anyone entering for the first time in a few months will not recognize the lobby. No more straight teller line. The new wave of teller service includes “pods.” It’s both more open and streamlined, but also allows for more personalized interactions. Behind the service desks, offices allow for private transactions without going too far.

But probably the most innovative and ambitious changes are in the online services that have been, and will continue to be expanded.

Technical changes are ex­pen­sive, said Ms. Sylvester, but the younger genera­tion has expecta­tions. Just as cassette tapes and VCRs dis­appeared to make way for newer and better products, all businesses must embrace technology to survive and thrive.

“That’s the evolution of life with technology,” said Ms. Sylvester. “Banking is evolving, too.”

ITMs (Interactive Teller Machines) are a good example of that. They combine the newest technology with the human touch, although the concept of the ITM has been around for years.

“It’s a live person behind the ITM,” during banking hours, she said. At night, it’s an ATM.

With $300 million in assets, Alltrust is not the biggest, but not the smallest, either. They need to grow to be able to afford all the new tech­nology, and they need all the new technology to grow.

“It’s a very exciting time,” said Ms. Sylvester, but adding all the new products and all the new technology is “a huge undertaking,”

The company has also added staff and continues to hire for a variety of positions.

She credited the board with having the vision to start and stick with the long process.

The big tech changes are still a few months off. The current system is “sunsetting,” meaning there are no new upgrades available for it.

The $1+ million upgrade will go online in the coming months, and will include enhanced security and monitoring.

SMCU started 100 years ago, and Ms. Sylvester said she hopes the new changes will position the organization to be around for at least another 50.

“Change in this business is inevitable,” said Ms. Sylvester. “We have to keep up with the changes.”