Ms. O’Brien recently achieved her Certificate in Local Government Leader­ship and Management, Public Administration from Suffolk Univer­sity. She has worked in the Select­board office for six years.

All three Selectboard members and Mr. Rees voiced confidence in her ability to handle her new duties, but also said they did not want to see her go.

Ms. O’Brien reminded them that she was not going far. And, she would be doing both jobs for awhile, until her position was filled. She thanked the board for the last six years.

Ms. O’Brien said the move was “bittersweet,” and that most people leave a job because they do not like it.

“I’m leaving a job I like,” she said. “I’m going to miss it tremendously. But my career calls, and the town needs me, and it’s an important position.”

One of Ms. O’Brien’s first duties will be to recruit for her old position in the Selectboard office. Mr. Rees has hiring authority for that position.

The position of Human Resources Director was recently created as part of the town government’s reorgani­zation from an Executive Secretary type to a Town Administrator type. The HR job was created at town meeting May of this year at a salary of around $80,000 per year. 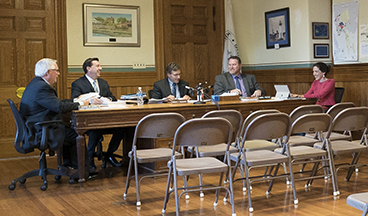 In other business, the board approved a permit for EJ’s to hold a third party event on September 28 for a business group.

Owner Cathy Melanson told the board that she would be present at the meeting.
On August 30, the board voted to take EJ’s license, forcing them to get permission for each event they hold.

An incident in July resulted in a crowd in the parking lot and allegations of underage drinking and other offenses.

The board wanted to rescind EJ’s license, but the restaurant has been, effectively, closed for reorganization. Local business owner Drew Tillett, who has also served on a variety of town boards, told the Selectboard on 8/30 that he plans to lease the building and take over the liquor license in the coming weeks.

In another matter, the board approved the date of November 23, Thanksgiving Day, for the annual Turkey Trot road race. New organizers from the New Bedford Track Club and from Union Running attended the meeting to introduce themselves and explain that they were taking over the race from the original organizers. Gerry Payette, director of the Shepherd’s Pantry also attended the meeting to let the board know that the pantry will still be the beneficiary of the race.

A public hearing that had been listed on the agenda was not held because it was not necessary, according to Mr. Rees. A change of officers/directors for 99 Restaurant and Pub was at the board of directors level and not something that required a public hearing.

In his report, Town Administrator Mark Rees told the board that the Oxford School Residences project had not received the historical tax credits necessary for the project to go forward. The Mass. Historical Commission cited the need to save the 1950s addition, as well as the original Oxford building.

The developer, Stratford Capital Group, and the town will work to resubmit the application with more information about the structural deficiencies of the addition. Mr. Rees also said it was not entirely surprising that the early rounds of grant requests would be rejected for the type of project proposed.