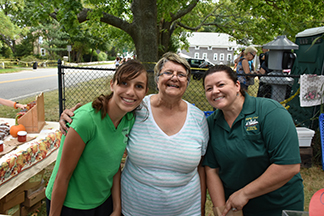 Although it was largely reported that the peach crop was devastated by the odd spring frost we had this year, the crowd filled the Long Plain Museum grounds for the Acushnet’s 37th Apple Peach Festival. The festival took place on both Saturday and Sunday, with the parade on Main Street starting at Pope Park.

“We’re doing fine,” said Madeline Gwozdz of Flying Cloud Orchards. Without Peters Family Orchard side by side with them this year, Flying Cloud was the last one standing. No farms were there this year, either, with Silverbrook putting out a big sign saying as much at the property on Main Street.

Ms. Gwozdz was quick to point out that three generations were working the booth this year, including her daughter Kelly Buckes and grand­daughter Lauren Mitchson 12. 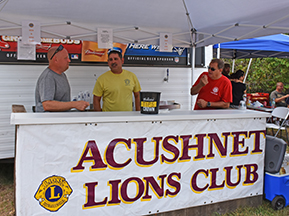 T: The Acushnet Lions had booths for beer, food and raffles at the 37th annual Apple Peach Festival in Acushnet this weekend. Photo by Beth David.

Ms. Gwozdz says the farm has been operating in the same hands for more than 40 years.

In the back, at the dunk tank, six-year-old Lachlan showed off his pitching skills by dunking Boy Scout Jack Roy.

“It was fun,” said Lachlan.

The longest line in the middle of the day on Saturday was at Blooming Onions, but the Lions Club was also doing a brisk business with their ice cold beer.

The Festival is traditionally held the weekend after Labor Day. So, mark your calendars for next year. 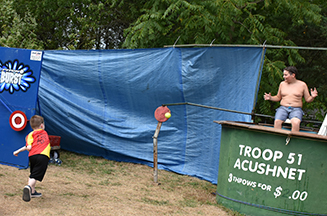 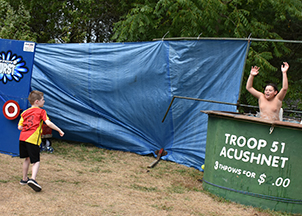 Jack Roy goes into the dunk tank after a great shot by Lachlan finds its mark at the 37th annual Apple Peach Festival. Beth David photo.