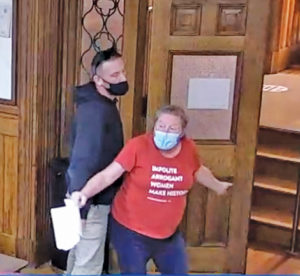 Diane Hahn (RIGHT) pivots away from Fairhaven Board of Health member Geoffrey Haworth as he tries to block her from entering the room during the 11/16/20 meeting, when Ms. Hahn managed to deliver printed materials to board members as part of a protest she organized outside of town hall just before that meeting. Screen shot from the Fairhaven TV government access by Beth David.

A group of about a dozen protested outside of Town Hall before the Fairhaven Board of Health meeting on Monday, 11/16/20, and one made it into the building. Diane Hahn organized the protest calling for a recall of BOH chairperson Peter DeTerra board member Michael Ristuccia. The group is also asking for a recall of Selectboard chairperson Daniel Freitas, and had petitions for all three members at the protest.

Interim Health Agent Sarah Dupont was in the middle of her COVID-19 update when Ms. Hahn entered the room. BOH member Geoffrey Haworth immediately got out of his chair and met her at the door to block her entrance. Ms. Hahn, however, simply pivoted and spun around and walked to the table where the other two members were sitting. She dropped some printed materials in front of each of them and headed out the door.

The microphones were turned off, so it is impossible to hear what Ms. Hahn and Mr. Haworth are saying, although they are clearly having a robust exchange.

After only a few seconds of the two  speaking to each other in the doorway, a police officer arrives and escorts Ms. Hahn out.

After Mr. Haworth sat, the board resumed the meeting without mentioning the disruption.

The online verson of the meeting shows a the Fairhaven TV logo superimposed on the image, obstructing the view. However, the Facebook Live version was not obstructed and was online long enough for many people to see. After the Neighb News sent a complaint by email, Cable TV director Derek Frates sent an unobstructed clip of the segment to the Neighb News and we were able to grab some screen shots of the action.

During the business portion of the meeting, Ms. Dupont told the board that the town had 81 cases of COVID-19 currenlty, 436 cases for the year.

She said the town is now yellow on the state’s list, instead of red. The state has reconfigured the way they designate municipalities, which is the reason for the change. Fairhaven has been yellow for two weeks.

Ms. Dupont reminded the board and the public that the state’s new mandates include wearing a mask in all public spaces, a stay-at-home advisory from 10 p.m. to 5 a.m., and no sit-down or bar service after 9:30 p.m. Take-out is still allowed.

The cap for gatherings is now 10 indoors and 25 outdoors, even for private gatherings.

Mr. Haworth noted that the board members and Ms. Dupont were all wearing masks.

Deputy Fire Chief Todd Correia appeared remotely to tell the board and the public that the department conducted limited testing for town employees and walk-ins that morning. The department, in conjunction with the health department will hold a public testing clinic on Saturday, 11/21, from 9 a.m. to noon at the Recreation Center. The testing is free and open to all Fairhaven residents. The results will be available online within 48 hours.

Mr. Correia said the timing will enable people to get tested before their holiday gatherings and get the results back in time.

Mr. DeTerra said he got tested that morning and saw the whole procedure.

“It will help a lot of people,” said Mr. DeTerra.

In another matter, Town Adminis­trator Mark Rees joined the meeting for a discussion about permit renewals.

Mr. Haworth said he wanted the BOH to waive permit fees for all restaurants, catering, and frozen dessert businesses, but he wanted to check with Mr. Rees because the fees to into the general fund.

Mr. Haworth said they were looking for ways to help out businesses that are struggling due to the pandemic.

“I think it’s a great idea,” said Mr. Rees, adding that he wanted to check with town counsel to make sure they followed proper procedure.

The board voted to waive the fees subject to verification by town counsel.

Mr. Haworth acknowledged that it was not a “big amount,” but it shows the town is trying to help small businesses.

Small businesses are “really hurting,” said Mr. DeTerra. “This is the heart and soul of Fairhaven.”

The board also acknowledged two open meeting law complaints from Amy Singleais regarding the Septemer 28, 2020 meeting. The board voted to send the letter written by town counsel dismissing te complaints.

Mr. Ristuccia noted that Ms. Singleais is the sister of the former health agent, Mary Freire-Kellogg, whom the board fired on September 28. He said she has filed numerous complaints and none have been deemed “viable” by town counsel. He also noted that she is not a Fairhaven resident.

“I would be incensed if my tax dollars were being used for this nonsense,” said Mr. Ristuccia.

The board also met with the owner of 10 Charity Stevens Lane about complaints that she has added more animals to her farm than her permit allows. Neighbors have also com­plained about noise, especially of the donkey, a new addition.

Mr. DeTerra said she should be working with her neighbors.

She assured the board that she had adequate housing for all her animals and the Animal Control Officer had inspected the premises. She said she would talk to her neighbors and meet with the board again.

The board also discussed the two open positions in the department, noting that the administrative assistant position has been filled.

The board still needs to hire an inspector and a health agent, but Mr. Haworth said they already had four candidates for inspector. He and Ms. Dupont will interview them on Friday and choose finalists.

For the health agent job, Mr. Haworth said he wanted to search “far and wide” for the best candidate, and wanted it to be a “very public process.”

Ms. Dupont was appointed as interim agent and will have to apply for the job, said Mr. Haworth. He said she would not automatically be ap­pointed to the position permanently.

Selectboard member Bob Espin­dola, who said he was speaking as a resident and not for his board, said he sent a letter to the BOH about the process for choosing a new agent. He said he was concerned after their 11/6 meeting. He said he wanted to make sure it would be an open process.

He also said their should be a “sense of urgency” due to the pandemic.

The board voted, at the suggestion of Mr. DeTerra, to ask Barbara Acksen, a former BOH member to be on the screening committee. The board appointed Mr. Ristuccia to be on the committee.

And Mr. Haworth suggested a person who does not live in Fairhaven to be on the committee. He said hew wanted to ask Acushnet Health Agen Joseph Correia. The board voted to approve the request.

In other business the board:

• Discussed the software contract with Relevant Sofware and agreed to hold off January with the agreement of the company.