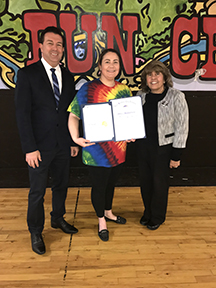 “It’s been a roller coasterd ride for sure,” said owner Charlene Conway, adding that the business has had to keep up with the changes of society and the town. “Trying to stay on top of the entertainment curve, so to speak.”

She said the demographics and population of the town have changed, and in surrounding communities,.

“So you have to constantly be on top of that, not only to stay with the current trends, but you also have to deal with the business end of it, and the slumps that are caused by that,” she said.

One of the things they did was build a miniature golf course outside, “Capt. Barnacle’s.”

“That helps with the summer because our skating rink is busiest when the kids are in school,” she said. “Then business slows down, but the population of the commu­nity increases.”
Mr. Murphy said it was important to recognize a town business that has been around for 25 years.

“Twenty-five years, that’s a lot of family fun,” said Mr. Murphy, adding that he remembered having birthday parties there for both his children. “So it’s been a part of my life and my children’s life. So it was good to celebrate with them.”

He said he looks forward to taking his grand­daughter there soon.

When Charlene told Mr. Murphy she hoped to be there in another 25 yeas, he said he would be there too.

Carousel Family Fun Center, 508-996-4828, is located at 4 David Drown Boulevard in Fairhaven. You can also visit their website at www.carouselskate.com and find them on Facebook.