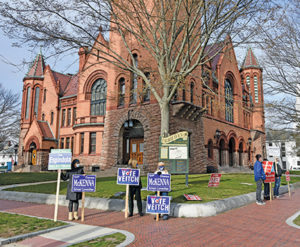 Supporters hold signs in front of Fairhaven Town Hall, the polling place for precinct one, on election day, 4/5/21. Photo by Beth David.

Fairhaven voters have spoken, choosing two newbies to politics and returning three incumbents, in the four contested races. Unofficial numbers show that about 19% of the electorate voted on Monday, 4/5/21, to choose officials on all boards and committees, and town moderator.

According to the Town Clerk, Fairhaven has 11,920 registered voters, and a total of 2,272 participated on Monday for a voter turnout of about 19%.

In the upset of the night, newcomer Don Carlos Collasius beat incumbent G. Bourne Knowles IV, in a close, but safe 1066 to 1030 count, for Tree Warden.

School Committee also saw a contested race, with three people running for two seats. Incumbents Donna McKenna and Colin Veitch both retained their seats with 1284 and 1282 respectively. Challenger Cathleen Marchessault made an impressive showing in her first foray into Fairhaven politics, getting 937 votes.

Board of Health also had a con­tested race, with two vying for one open seat. Newcomer Kevin Gallagher pulled off an impressive win over Barbara Acksen, who was on the BOH from 2012–2015. Mr. Gallagher received 1602 votes to Dr. Acksen’s 558.

Planning Board also had a seat to fill an unexpired term previously held by Wayne Hayward. Mr. Hayward launched a write-in campaign to get his seat back. According to the tally sheet there were 138 write-ins, but they had not been tallied by press time.

Also on the ballot was Commis­sioner of Trust Funds, with one open seat and no one on the ballot. According to the clerk’s unofficial tally sheet, there were 65 write-ins, but they had not been counted by press time. 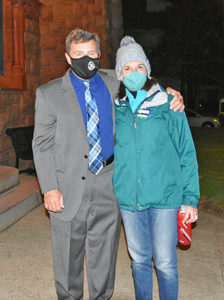 Bob and Anne Espindola pose outside Fairhaven Town Hall after Bob got re-elected to a third term to the Fairhaven Selectboard on 4/5/21. Photo by Beth David.

In a decades long tradition, after the election, Town Clerk Carolyn Hurley announced the unofficial results in the banquet room at town hall, which was televised on Channel 18, livestreamed, and available via Zoom. Selectboard Chairperson Daniel Freitas and board member Keith Silvia were joined by Maria J. Carvalho of the Cable Advisory Board to play a bit of Fairhaven trivia while they waited for the results. Candi­dates were invited to address voters.

In the chit-chat before the results were announced, Mr. Freitas said it was a good turnout probably because it was a beautiful day, a nice day to hold signs.

Mr. Freitas said all candidates were winners for trying.

“Win, lose or draw you still win because you went out and you tried to help your community,” he said.

First up was Ms. Plante, who lost her bid for Selectboard.

“I’d just like to thank everybody that supported me, that came out and held signs for me,” said Ms. Plante, adding a thank-you to everyone who went to the polls and helped her in any way. “I’m grateful for everybody.”

She also thanked her family for “putting up with all of this.”

“I will be back,” said Ms. Plante. “I’m passionate. I’m still going to serve this town.”

Mr. Espindola thanked Ms. Plante for the “strong effort that she put it.”

He also mentioned some of the negativity that swirled around the race, saying that some things “went on outside that weren’t the best.”

He said that he and Ms. Plante, however could look each other in the eye “and know that we weren’t involved in anything directly.”

“I’m real proud of the campaign that our team put together,” said Mr. Espindola, and thanked his volun­teers and his wife and daughter. 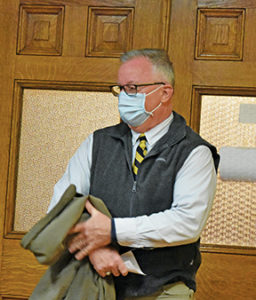 Kevin Gallagher enters the Banquet room in Fairhaven Town Hall to address voters on 4/5/21 after he won a seat on the Board of Health. Photo by Beth David.

He welcomed those who did not vote for him to contact him and let him know what he can do better.

“Because I’m committed to the next three years to serve everyone in the community as best as I possibly can,” said Mr. Espindola.

Dr. Acksen said she spoke with Mr. Gallagher in the hall and told him she would help him to “right” the BOH.

Mr. Gallagher said it has been “exceptionally rewarding,” to run. He said he had been involved in cam­paigns years ago at multiple levels.

“I missed the opportunity to shake hands at supermarkets and go to bingos, and knock on people’s doors,” said Mr. Gallagher, noting that because of COVID-19 they had to “bounce on the balls of our feet,” and come up with different ways to campaign.

He said he was extremely happy and grateful for this family for putting up with a “major league distraction,” and said his wife had been “amazingly supportive.”

“I’m just very thankful, but, now the work starts,” said Mr. Gallagher, and noted an old saying that the “poetry of campaigning yields to the prose of governing.”

He said he would wake up in the morning thinking, “Okay,  you wanted it, now you got it. And let’s see what we can do.”

“I’d like to thank all the folks who supported and voted for me in this effort,” said Mr. Collasius. “I would like to thank Beth David for her coverage of the campaign and thorough publishing of local politics.” 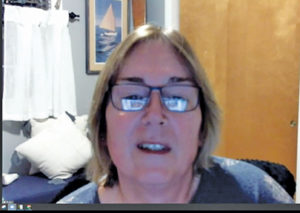 Ronnie Manzone addresses voters remotely after being elected to the Fairhaven Housing Authority on 4/5/21, and notes she is the first transgender person to be elected to a position in Fairhaven. Screen shot from Fairhaven Government Access TV by Beth David.

He especially thanked his wife for her “unwavering support, and the rest of my family who backed me in this effort.

Mr. Collasius promised to work “diligently” to ensure no one regrets voting for him. “I will do all I can to make Fairhaven a safer and greener place for all those who dwell and pass through it.”

Ms. McKenna thanked voters for giving her another three years.

“And I will do the best job I can,” said Ms. McKenna. “And I appreciate all your votes out there.”

Mr. Veitch said it has been a “great journey” and that he started out thinking about this four children and ended up being concerned for 2,000 Fairhaven children.

“I love my job,” said Mr. Veitch. “And it’s very satisfying and a huge part of my life.”

Ms. Marchessault thanked the 937 people who voted for her, saying, “I sincerely appreciate your support… maybe we’ll try again next year.”

Ronnie Manzone thanked everyone for voting for her, joking, “Of course, we’re in a race by ourself this year, so we were looking pretty good all the way through it.”

She said she appreciated the support and vote of confidence and, “As always, I’ll give it my best shot.”

She added she will try to do what is best for Fairhaven.

“I love this town,” said Ms. Manzone. “I think everybody knows that.”

She also noted that with her election the town made history.

“We elected the first transgender candidate in the town of Fairhaven,” she said. “So God bless all of us.”

Mr. Braga, who won a seat on the Planning Board, thanked everyone who ever reached out to him during the election about his viewpoints on various issues. He thanked those who voted for him and those who did not.

He congratulated all the candi­dates and invited voters to reach out to him with any questions.

Ms. Fidalgo kept it short, thanking everyone who voted, and those who ran, win or lose, for caring enough to run.

“And I hope to make everybody proud in the future,” said Ms. Fidalgo.

Mr. Sylvia, the Town Moderator, said even though he was unopposed, he recognized that the voters of Fairhaven chose to re-elect him.

“I take it very seriously,” said Mr. Sylvia, and noted that the town has dealt with difficulties running town meeting in the last year due to COVID-19, and said he appreciated the support.

“I appreciate the opportunity and am honored to continue in the role as moderator,” he said.

All numbers are unofficial and do not include hand counts. The Town Clerk’s office will finalize results in the next few days and they will then be certified. Hand counts are ballots that are rejected by the machine for a number of reasons and have to be counted manually. The clerk’s office said that the total number of hand counts was not sufficient to change the result of any race.