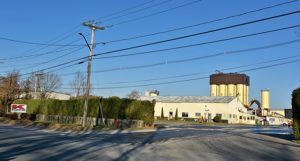 The asphalt plant, with its huge tanks, at PJ Keating Company on South Main Street in Acushnet is in the front of the property, closer to the street and closer to residences than when the asphalt operation was in the back of the property, and the move has prompted complaints from neighbors about increased dust and an acrid stench in the air. Photo by Beth David.

The Acushnet Board of Health met with about 30 neighbors of the PJ Keating Company quarry and asphalt plant on Saturday, 11/6/21, at the Senior Center, and heard about a host of complaints, including dust, odor, and noise that neighbors say have been getting worse.

A change in the bylaw governing the property several years ago allowed the company to move the asphalt operation to the front of the property, closer to residences. The new asphalt plant only started operat­ing about a month ago, and complaints have increased since then.

One of the changes allows liquid asphalt to be stored in large tanks that now can be seen from the road. The town halted that part of the operation, so the company is only allowed to truck in the amount of asphalt it will use each day.

BOH chairperson Thomas Fortin opened the meeting and noted that the town is in litigation with PJK, so some questions, may not be answered in full.

Diane Abrams began the discussion, saying that on that very morning the smell was so bad that her nose was burning. She said people are worried that taxes will go up if they stop operation of the company, but her granddaughter’s health is worth more than $100 or $200 more in taxes.

“This is still America, and we still have a voice,” said Ms. Abrams.

She urged the “town fathers” to do something to stop the company, adding that PJK has millions of dollars so they feel they can do what they want, even if it is not legal.

Town Counsel Jeffrey Blake urged her and others in the room to use the portal on the town’s website to report violations.

“The town will take every complaint you have seriously, very seriously,” said Mr. Blake.

Linda Skapik said her asthma had been kicking up again. She said this summer, when the plant was not operating, her asthma was not acting up. She also said a group of neighbors online had the same complaints.

Ms. Skapik and several other residents referenced the lawsuits between the town and PJK. Mr. Blake assured residents that the lawsuits do not prohibit the BOH from acting on any health/nuisance complaints related to the operation of the plant. He said the company has a right to due process, so the court cases are proceeding. He also said the asphalt plant only “fired up” a month ago so none of the litigation involves it. 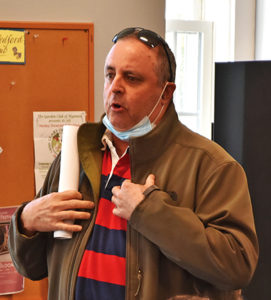 Kevin Smith addresses the Acushnet Board of Health and other town officials at meeting at the Senior Center on 11/6/21 to hear neighbor complaints about operations at the PJ Keating Company asphalt plant and quarry on South Main Street. Photo by Beth David.

Several residents complained that their cars were damaged from tar. Mr. Blake told them that is a matter between them and PJK, not the town.

Kevin Smith said he has been fighting and going to meetings for more than 20 years. Sometimes, he said, no one was at the meetings besides him and board members. He said people need to get involved and stay involved.

Mr. Smith asked about air quality monitors. He said the people who work at PJK or visit there are in their vehicles, but the residents are exposed to the bad air. He said the state should have taken air quality samples while the plant was not in operation to get a benchmark.

Mr. Blake said there are air monitoring stations on the property. PJK is also required to spray piles to keep the dust down, and wheel wash trucks.

Mr. Smith said it is not mandatory, and the wheels on the trucks clearly have not been washed. Basically, he said, PJK has said, “screw all you neighbors,” because it is a big company, and can do what it wants. He said the company has never been honest with them before, so it cannot be trusted now.

Cheryl Hall said that PJK reported there was no silica in the particles, prompting laughter from the residents. She said her gutters are clogged with silica dust. This was the first summer she did not have to run her pool 24 hours a day, because the plant was shut down.

She noted that when the plans for the new plant were revealed, the new equipment promised to make the operation “odor free,” prompting more laughter from the residents.

That was what they proposed, she said, and they proved in less than a month that they will not work collaboratively.

Doug Thomas said that the “parade” of trucks started at 5:15 a.m., which is a violation of the company’s hours of operation.

One resident said that a puff of smoke or steam can often be seen hanging over the plant.

Residents also asked about DEP and questioned whether or not the agency was taking the matter seriously. 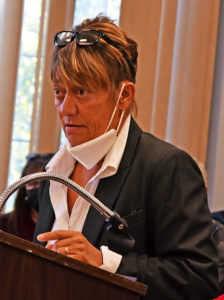 Deborah Polchlopek addresses the Acushnet Board of Health and other town officials at meeting at the Senior Center on 11/6/21 to hear neighbor complaints about operations at the PJ Keating Company asphalt plant and quarry on South Main Street. Photo by Beth David.

Mr. Blake noted that it’s a “by-right” use of the property. DEP had to issue the permits as long as the company complies with regulations.

He assured residents that DEP is frequently updated on complaints.

“We’re keeping this on the front burner,” said Mr. Blake.

Allan Baker told the board that he has seen stone dust in the woods and in places where the trucks never un­load, so it is clearly from airborne dust.

Deborah Polchlopek told the board that while other people are outside enjoying the “crisp, fall air,” PJK’s neighbors are afraid to go outside

The horrible odor smells like burning rubber, oil and “God only knows” what chemicals are in the air, she said, adding that the smell is “lingering” and “traveling,” prompting complaints from other parts of town.

Recently, asphalt has joined the dust in yards, in pools, on children’s toys outside, she said. The company has blamed the asphalt and odor on nearby repair work, but never identified where.

“They are responsible for the invasion of these toxic odors,” said Ms. Polchlopek. “We all know it.”

They are neglectful and are ruining “our beautiful town,” she said. “It’s a shame. It really is. It’s a shame what’s taking place here. I’m disgusted.”

She asked if they knew for sure that it is asphalt in the air and how it can be monitored.

“We don’t know what we’re smelling. All we know is, it’s horrible. My throat’s burning, my eyes are burning,” said Ms. Polchlopek. “We have residents becoming sick because of it. I’m afraid to go outside. I’m beginning to lose my voice.”

Conservation Agent Pat Hannon answered that they are working with an air quality expert to come up with a plan to detect volatile compounds.

Roland Pepin agreed with Ms. Polchlopek that the odor is traveling. He said it was like someone was burning electrical wire in his back yard, but it was a half mile away. He said he has a pool and his grand­children swim in it every summer. 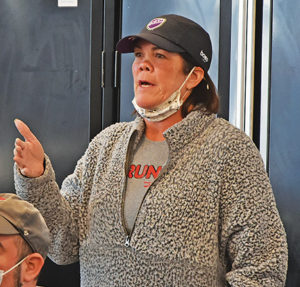 Cheryl Hall addresses the Acushnet Board of Health and other town officials at meeting at the Senior Center on 11/6/21 to hear neighbor complaints about operations at the PJ Keating Company asphalt plant and quarry on South Main Street. Photo by Beth David.

“I’m fearful of their life because of this odor,” said Mr. Pepin.

Doug Thomas told the board that the company “literally rubbed this community’s face in it” when they moved the asphalt plant to the front of the property.

“They’ve created the ultimate monster,” said Mr. Thomas, adding that they have not been good neighbors. Trucks lined up at 5 a.m. that very morning he said. “This is like a punch in the gut.”

“We’re fed up,” said Mr. Thomas. “We’re fed up as residents of this community. And we want action.”

Mr. Blake asked Mr. Thomas to use the portal to report the 5 a.m. trucks because it was news to the town, as trucks are not supposed to be going into the plant that early.

The two went back and forth about the building permit and other permits for use, and whether they were acquired properly or not.

“This is a toxic business,” said Mr. Thomas. “They’re destroying this community.”

Mr. Blake noted that the plant did not operate all summer because DEP did not accept the company’s assertion that the changes were minor. DEP finally issued the permit just about three weeks before the meeting and already there were numerous complaints. He reiterated that it is important for residents to lodge their complaints so the BOH has documentation to take action on the nuisance complaints, and to send to DEP for possible action on the permit.

Mr. Thomas said the company has not shown a history of playing by the rules.

“We should not have to ask them to do their jobs,” he said. 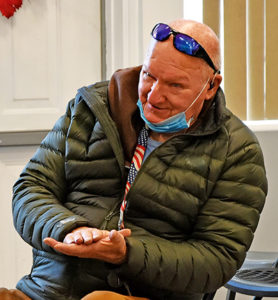 Allan Baker addresses the Acushnet Board of Health and other town officials at meeting at the Senior Center on 11/6/21 to hear neighbor complaints about operations at the PJ Keating Company asphalt plant and quarry on South Main Street. Photo by Beth David.

Mr. Smith also noted that the com­pany is not locally owned, so owners do not care about the local community. He said the community needs to stick together and support the BOH in their efforts to hold the company accountable.

“If we self destruct, they win,” said Mr. Smith, adding that things will only get worse if the community does not keep at it. “We have to stick together and stick to our guns and support the Board of Health and Board of Selectmen.”

He said people need to show up at the meetings.

The board also discussed the change in the bylaw that allowed the expanded use of the property. Town Meeting struggles for a quorum each year, they noted, so a small number of people approved the new bylaw with the required 2/3 vote.

“The odor is real,” said Chuck Schestak, noting that PJK repre­sentatives have called him a liar by denying the odor exists at all, a charge also made by other neighbors. “I do not want to be here today. No one does. We just want to live our normal lives.”

Neighbors also told the board that they felt they were left in the dark and not notified about meetings or updated on any action the town is taking. Mr. Fortin said the BOH would post weekly updates on the town’s website and find other means to keep residents updated.

To report a complaint against PJK, call the Acushnet BOH at 508-998-0275, at any time of day and leave a message if no one answers; or use the portal on the Town of Acush­net website: https://www.acushnet.ma.us/home/webforms/pj-keating-concern-complaint-portal. Be sure to note the time and day of the violation.

You can find a video of the meeting on the town’s YouTube channel at https://www.youtube.com/watch?v=yy9Ws9od–g