The origi­nal destina­tion was Block Island. But when Friday afternoon rolled around, my friend Tori and I had only decided that we wanted to leave from Newport because it’s a shorter ferry ride than Fall River. We still needed to research ferry times, places to visit, etc. So, we just decided to make our destination Newport.

Good choice it turns out.

We knew we wanted to go to the Cliff Walk, but neither one of us was up for a real hike, climbing on rocks, or anything close to that. It was a hot Saturday in August, so strenuous hiking was out of the question. No problem, though, the Cliff Walk has a fantastic stretch of paved walkway that is easy for any ability, and is wheelchair accessible. 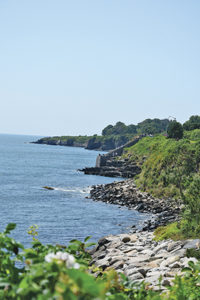 The sky is clear and the water blue along the Cliff Walk in Newport, RI, approaching 40 steps, on 8/3/19. Photo by Beth David.

We started our day at the very impressive “Gateway” Transportation and Visitors Center. There, you can sign up for cruises and tours of all kinds. Brochures are everywhere and the people are very helpful. There is also some tourist-y wear to buy there.

Be sure to get your parking discounted while you’re at the counter. We though we were getting two dollars off, but it turns out we parked for two dollars for the whole day, instead of $24.50. Either way, it was worth it to leave the care there and use the trolley, which is $2 each time you get on. They take cash, paper or coin, and cards.

A very helpful, albeit somewhat impatient, man at the round desk was quick to point out that it was a Saturday in August, so the harbor cruises were mostly sold out. We managed to get booked on the Rum Rummer II for 3:30, at a different counter in the same room.

He neglected, however, to tell us that the trolley we saw out there did, indeed go to the Cliff Walk. We were about to drive there when I decided to ask the driver. The trolley does a great loop around the city and all the usual stops, including the mansions, six stops along the Cliff Walk, shopping plazas, and waterfront. Three trolleys are on a 20-minute loop all day, so you never have to wait long.

We picked up the Cliff Walk at the beginning, at Memorial Boulevard. It was a few blocks to walk from where the trolley dropped us off on Bellevue Avenue, but worth it to start at the beginning. A beautiful public beach is right at the bottom of the hill.

It’s worth the trip just to get that far and use that beach all day.

But, we were on a mission.

We followed the Cliff Walk for probably about a mile. It’s a 3.5 mile walk all told. We stopped at the other side of Salve Regina Univer­sity, at Shepard Avenue. At that point the terrain was about to change anyway and we were not about to get brave. We were too hot, and hungry, too.

Most of the section we did was wheelchair accessible, but then some steps would pop up. You can visit the website or ask at the visitors center for which sections are accessible. 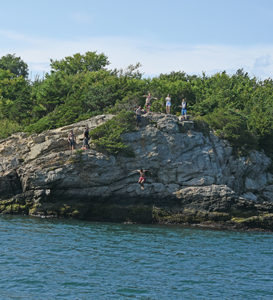 A young man shows off for the tourists by jumping from the cliffs in Newport Harbor on 8/3/19. Photo by Beth David.

It was a busy place, but not too crowded. At Forty Steps, we could get close to the water, and a few people went in.

We took tons of pictures. The water crashing against the cliffs, the birds, boats, butterflies and just the expanse of the ocean on a hot August day were spectacular to take in.

Some homes abut the path, and the imagination gets easily stoked seeing the gated pathways lined with shrubs and flowers we did not know the names of.

For those of you who visited the Cliff Walk a long time ago, be sure to visit it again. It has undergone substantial restoration that ended in 2006. It is a National Recreation Trail in a National Historic District. There is a rest room just before Salve at Narragansett Avenue, available seasonally.

After walking for a couple of hours (we stop a lot to take pictures), we grabbed the trolley and went back to the International Tennis Hall of Fame stop, which is near the corner that we got dropped off at the beginning. We didn’t go into the HoF, but we poked our heads in and were surprised to see people playing tennis on grass. We’ll have to add that one to our list

We opted for a little diner named “Annie’s” on Bellevue Avenue instead of the fancy expensive place. Not that we have anything against fancy, expensive places when we’re in Newport. It’s just that the other places didn’t really appeal to us, but Annie’s kind of jumped out and Tori said, “This is our kind of place.”

I got the Annie Burger, and Tori got the fried shrimp. The food was good and tasty, and priced right, too. The whole meal cost around $35 with tip (okay, I lost the slip).

It’s a funky little place, too, with wooden booths and wooden shelves, and old pictures on the wall. Definitely has not caught up to ADA standards, though. If you have mobility issues, you’ll have trouble in the restroom.

The staff was friendly, though, the food was good, solid fare. They did, however, overcook my burger, but… I expected that. It’s hard to find a place that will do rare these days.

At that point it was getting close to 2 p.m. Our harbor cruise was at 3:30. We decided we did not have enough time to take the Ocean Drive “Ten Mile Drive” before the cruise, so we went back to the car, via trolley.

We cooled off in the car, re-hydrated, made another trip to the visitors center, then walked to Bannister’s Wharf, where the boat was docked. 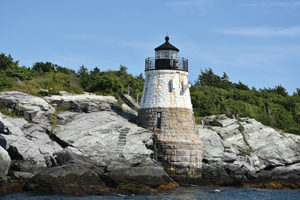 A view of the Castle Hill Lighthouse from the harbor aboar the Rum Runner II on 8/3/19. The Lightouse is not open, but there is a trail for the public to use, accessible from the Castle Hill Inn & Resort grounds. It is still an active aid to navigation. Photo by Beth David.

We had wanted to use the Newport Harbor Shuttle, which does a 55-minute harbor loop with six stops. It’s $12 to hop on, hop off all day ($6 for children). Unfortunately, the shuttle was only taking people to the jazz festival. So, not only did we pick a Saturday in August, we picked jazz festival weekend, too.

We were a little early, even though they like you there at least 20 minutes before departure time. They gave us a blue ticket, to get us on the boat, so we realized the other ticket was more of a fake ticket, holding our seats, I guess.

We explored the shops while we waited to board, and found a Ben & Jerry’s…just what the doctor ordered. No need to expound on the ice cream, it was Ben & Jerry’s. I did notice a little place called “Sprinkles” that also had ice cream. I probably would’ve gone there, but we noticed it too late. The shops are a mix of the usual tourist fare, but some with a definite nautical, Newport feel, like Sea Bags, which uses donated sails to make tote bags and other items.

Using the head (aka the toilet, for you landlubbers) is a bit of an ordeal. You have to close the lid, and give 8–10 “steady pulls using the FULL movement of the pump handle; pause for five seconds, then continue pumping” 5–6 more times, according to the sign.

Now, it motors around the harbor while Capt. Jay and his first mate Sarah tell stories of the harbor, including Jackie (Bouvier) Kennedy Onassis’s childhood home; smugglers cove that the US Coast Guard finally  built a station inside of (to stop smuggling or to get the first delivery? asks Capt. Jay); clingstone, named as such because a house once owned by the founders of the Wharton Business School clung to the stone and did not end up destroyed in a Hurricane; and, of course, a couple of light­houses, including one that was staffed by the first female lighthouse keepers in the nation, and is now named the Ida Lewis Lighthouse.

And, we even got to hear a little bit of the Jazz Festival as we cruised around the harbor.

The Rum Runner II originally used three Liberty aircraft engines. Now it uses twin turbo-charged 350HP Caterpillar Marine Diesels. Capt. Jay will be sure to show you the power of those engines a couple of times on the water. Prepare to get a little wet. It is an open boat, after all.

We ended our trip with a crusie along Ocean Drive’s Ten Mile Drive. We stopped at Brenton Point State Park where people were flying kites, just as the website promised.

Brenton Point Park is an absolute gem, is completely free, and provides access across the street to a spectacular and energetic beach. It has restrooms, but they were not very well maintained. However, they were most definitely better than a hole in the ground.

The Ten Mile Drive is includes more than Ocean Drive, which takes up about a third of it. If you are not very mobile and like a good drive, this is the perfect Newport experi­ence for you. There are places to stop along the way to look out into the ocean, or peer above the treetops and imagine the wealth of the home­owners along the drive.

Visit the website first, or get information from the visitors center so you’ll know what you are looking at.

We did not “do” the mansions this trip, although our drive, walking, and trolley trips took us past several of them. 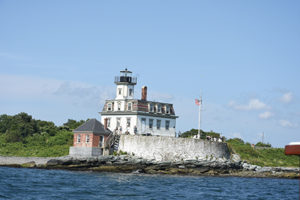 A view of the Rose Island Lighthouse from the harbor aboard the Rum Runner II on 8/3/19. Rose Island was rescued in 1984 by a private group that restored the lighthouse and turned it into a hotel. It is listed on current charts as a private aid to navigation. Photo by Beth David.

There are 14 mansions, and the Preservation Society of Newport County offers a few different packages: $38 for five properties; $32 for two properties; and single property tickets, as well.

Fort Adams, which is where the Jazz Festival was held this weekend, is also a great destination, and on the list to do as a day trip all in itself.

Newport also has trolley tours, and walking tours, ghost tours, and the famed mansion tours. We couldn’t do everything on our day trip, but that’s a good thing. There are many things to do, some free or at very low cost, to keep you going back again and again.

All in all, Newport is about as visitor friendly as it gets, with shuttles and trolleys and many places for visitors, not just that big center, that have brochures and helpful people to make your trip a good one.

• Drive time is about an hour from Fairhaven.

• Don’t forget to get your parking ticket discounted at the visitors center, or by the trolley driver.