On Wednesday, 3/11/20, six of the 11 candi­dates running for office in Fairhaven voiced their messages to the public at the candidates’ night held in the Fairhaven Town Hall auditorium. The event was sponsored by the Fairhaven Cable Access Channel (Fairhaven TV) and will be cablecast on channel 18, and is also available on demand at www. fairhaventv.com

Last week we wrote about the Selectboard candidates, the only contested race. This week we present the candidates running unopposed for their respective offices.

Two seats on the School Commit­tee are on the ballot this year, with the two incumbents, Brian Monroe and Pam Kuechler, both running for re-election. 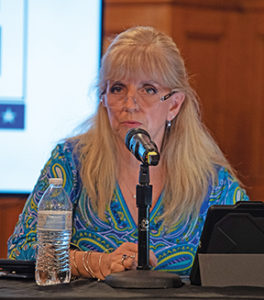 Ms. Kuechler made her opening statement thanking Fairhaven TV, and saying she is thankful to have served on the School Committee for the last 12 years.

Ms. Kuechler said they base their progress on the success of their graduates. She said the students have received many awards and three million dollars  in scholarships.

Mr. Monroe made is opening statement thanking Fairhaven TV and everyone in town.

He said that he has been on the School Committee for nine years and that the Fairhaven schools are some the best on the Southcoast. All schools now have integrated tech­nology in all grades and are able to compete in the modern world.

Mr. Monroe said the schools can also utilize social media for promo­tion and awareness in the community especially with the most recent health crisis.

Mr. Monroe also said that the schools have a very inclusive environ­ment with unified sports teams, and special services academically, socially, and emotionally.

He said the School Committee has also been fiscally responsible. 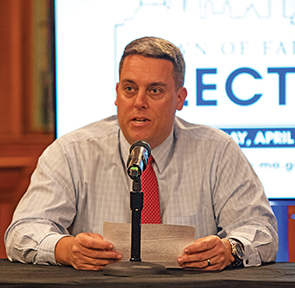 Being the School Committee has been amazing, Mr. Monroe told the voters, and asked the public to continue to trust him with their vote.

Panelist Derek Frates questioned for the candidates, asking that of all the work they have done what accom­plish­ment are they most proud of.

Ms. Kuechler said that 12 years is a long time and a lot has happened, which makes it hard to choose one .

“It is hard to put one thing on top of everything,” Ms. Kuechler said, adding that she is proud of the new Wood School and just proud to serve the town, as well as proud to continue pushing the envelope and making new things happen.

Ms. Kuechler said it has been humbling and she is grateful for the experience, as well as working together as a team.

Mr. Monroe said he had a back­ground in engineering and technology, and when he first got elected to the SC, the schools were lacking in technology: They had old computers, varying types of machines and no infrastructure to support the technology that they needed.

Mr. Monroe said he got Dell Corporation to conduct a study of the technology in the schools and because of that study the town now has a fiber optic network that connects the whole town and all new technologies in the schools, including Chrome books for all high school students.

Mr. Monroe said the study did a lot.

Mr. Frates also asked the candi­dates was how their professional careers help them make 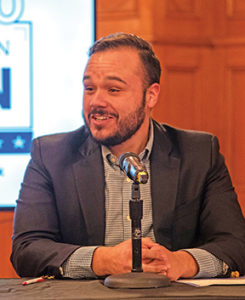 Fairhaven Board of Public Works incumbent Cameron T. Durant speaks at the Meet the Candidates night sponsored by Fairhaven Government Access TV on Wednesday, 3/11/20, in the Town Hall auditorium. Photo by Glenn C. Silva for the Neighb News.

decisions for the student body.

Ms. Kuechler said that she worked in early education for the majority of her career and learned early on that it is all about the investment into the students She said she has always approached decisions with that knowledge.

Mr. Monroe answered the question stating that was an easy one: he has three kids.

“Everything I do, I do for them,” Mr. Monroe said. “It is why I volunteer, and if they succeed all the students succeed.”

Mr. Monroe also said that with his job in engineering and technology he wants to make sure that students are able to learn about his type of career and do his type of job because one day they will need to take over.

In her closing statement, Ms. Kuechler thanked the voters for the opportunity to serve them for the last 12 years, and said she would be grateful for their continued support.

Ms. Kuechler also said she just wants to give back and make a difference. She encouraged anyone not to be afraid to get involved and to pay it forward and do good for the town.

It has been the honor of a lifetime, she said.

Mr. Monroe closed by thanking the voters for trusting him to serve on the School Committee for the last nine years. He said there are great things happening in the School Department right now.

Mr. Monroe said he cannot wait to keep going and “push the ball up hill.”

Also on the ballot this year are two seats on the Board of Public Works, with both incumbents, Brian Wotton and Cameron Durant, running for re-election. Mr. Wotton was not at the candidates night.

Mr. Durant gave his opening state­ment, introducing himself to the public, even though he has been o nth BPW for three years. He noted that he wanted to introduce himself he was a write-in candidate when he was first elected to the board.

Mr. Durant said he has lived in Fairhaven for four years with his wife and children, and it has been a blessing being a part of the community and the BPW.

The list of accomplishments the BPW has made makes him very proud, said Mr. Durant, adding that the board is so successful because of the staff and mainly because of Superintendent Vincent Furtado. 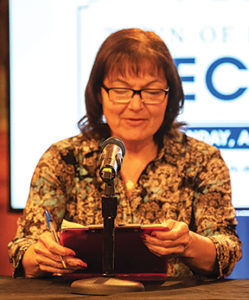 Fairhaven Housing Authority candidate Carol A. Alfonso speaks at the Meet the Candidates night sponsored by Fairhaven Government Access TV on Wednesday, 3/11/20, in the Town Hall auditorium. Photo by Glenn C. Silva for the Neighb News.

Mr. Durant said he appreciates and has learned so much from Mr. Furtado, and the town is blessed to have someone as good as him.

There have been some great gains in the Park Department, said Mr. Durant, especially the new BMX area at Macomber Park that is run by volunteers.

He said that the BPW really listens to residents’ needs and tries to help. The BPW fought for stop signs to be placed on West Island, and because of Mr. Furtado they were able to get the approval for the signs.

The current big BPW project is the $30 million upgrade to the sewer system, said Mr. Durant.

Mr. Frates stated that the BPW’s mission statement states that the BPW strives to maintain and improve living conditions for residents, and asked Mr. Durant how he plans to improve conditions.

Mr. Durant answered that he plans to improve conditions by continuing to provide quality service.

By updating the sewer system they are improving the environment so residents can continue to enjoy living on the water for longer in a much cleaner environment.

In his closing statement, Mr. Durant said i has been a privilege serving on the BPW, and he hopes to continue doing more.

Mr. Durant said they will be moving the recycling center which could be costly, and they need a board that is responsible with money and regula­tions, and tries to keep costs down for residents as best as they can.

The last candidate was Carol Alfonso who is running unopposed for one seat on the Housing Authority.

In her opening statement, Ms. Alfonso said she will work very hard and face any challenge. She said she wants to represent the concerns of all tenants.

Mr. Frates asked what Ms. Alfonso’s thoughts were on veteran prioritization over longtime residents of Fairhaven for placement in public housing.

Ms. Alfonso said she has a lot of respect for veterans. She also said as far as she knows the veterans go to the top of the list to get housing first. She said as of now she does not know how else to answer that question.

In her closing statement, Ms. Alfonso  thanked all for having her there and said she was grateful for the opportunity.

Moderator Marie Carvalho ended the night stating to get out and vote*.

*The Fairhaven Selectboard has postponed the election, originally set for 4/6, due to the COVID-19 pandemic. The tentative new date is 5/18/20.