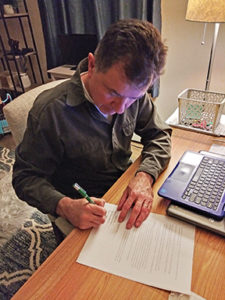 Unitarian Universalist Society of Fairhaven (UUSF) is the latest local organization to commit to switching to 100-percent renewable electricity by 2030. The UUSF Board of Governors signed on to The Climate Reality Project’s 100% Committed campaign in November, pledging that their three-building property’s electricity would come entirely from renewable sources by 2030. This announcement comes on the heels of similar pledges from six other local organizations,* as more Southcoast groups and businesses take control of their energy future.

The UUSF grounds in historic old Fairhaven include the cathedral whose landmark spire is widely visible from the approach to New Bedford harbor (and elsewhere), earning it the nickname #CathedralByTheSea.

The UUSF announcement comes at a time when both the reality of the climate crisis and the practical steps to solve it have never been clearer. Seventeen of the 18 hottest years on record globally have occurred in this century, with 2016 and 2019 nearly tied for hottest overall. Recently, uncontrolled wildfires wreaked havoc on the West Coast, fueled by drought conditions, lightning strikes, and human error. Meanwhile, oceans are rising, warming, and spawning ever more severe coastal storms around the globe.

The 2020 Atlantic hurricane season set several new and unwelcome records, including the most hurri­canes to make landfall in the continental United States in one season. So far, our region has been spared.

Climate Reality Massachusetts Southcoast brings together the passion to fight climate change with the passion to protect our local environ­ment. “Members of the South­coast’s Climate Reality chapter partner within our own commu­nity on public outreach, educa­tion, and advocacy, creating local solu­tions to the global climate emergency,” says Fairhaven resi­dent Laura Gard­ner, who founded the chapter in late 2019. “But we can’t do it alone. I challenge other businesses and nonprofits across the Southcoast to join us and become a 100% Committed partner. Together, we are an unstoppable force for change.”

“The Unitarian Universalist Society of Fairhaven is excited to become a partner of The Climate Reality Project,” said Bob Rocha, currently President of the UUSF Board of Governors and longtime Acushnet resident. “In so doing we affirm the seventh UU principle, ‘Respect for the interdependent web of all existence of which we are a part’, acknowledge local efforts to increase use of renewable energy, and encourage other congregations to join us.”

Founded by Nobel Laureate and former U.S. Vice President Al Gore, The Climate Reality Project is leading worldwide efforts to accelerate the shift to clean energy and solve the climate crisis. With a global move­ment of over 25,000 Climate Reality trained leaders, we are spreading the truth about the climate crisis and building popular support for clean energy solutions.

With the climate crisis threatening our planet and ways of life, The Climate Reality Project’s 100% Committed cam­paign works with communities, universities, and businesses world­wide. By taking action and committing to run on 100-percent renewable electricity, we can make a difference in our communities and around the world.

*For more information visit https://www.climaterealityproject.org/initiative/100-committed, and email climaterealitysouthcoast@gmail.com to learn how to get involved locally.