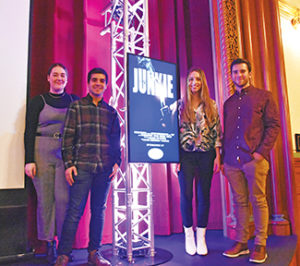 Crewmembers of the 20-minute short film “Junkie,” pose for pictures after a screening of the film to a nearly full house of 130 people in the Fairhaven town hall auditorium on Friday, 1/10/20, L-R: Claudia Marie Negalha/makeup, assistant camera/editor Erick Sa, Director of Photography Sean Campbell, and Writer/Director/Executive Producer Alyssa Botelho. Photo by Beth David.

Alyssa Botelho and her merry band of film makers showed their first movie, a 20-minute short titled Junkie, to a respectable 130 people at a free screening on Friday, 1/10/20, in the town hall auditorium. The group of young professionals held a question and answer period after the film, showcasing their enthusiasm and the support of the hometown crowd.

“I feel pretty excited,” said Ms. Botelho before the movie got started. “It’s cool to see everybody here. It’s kind of like a reunion. They’re all my people.”

She said the relative saw the film and liked it. She said he thought it was “kind of surreal” to see some­thing that happened to him on screen. 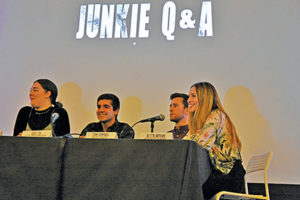 L-R: Crewmembers of the film “Junkie,” Claudia Marie Negalha/makeup, assistant camera/editor Erick Sa, Director of Photography Sean Campbell, and Writer/Director/Executive Producer Alyssa Botelho, listen to a comment during the question-and-answer period after the screening of the 20-minute short film to a nearly full house of 130 people at Fairhaven town hall on Friday, 1/10/20. Photo by Beth David.

“A lot of it is fictionalized,” said Ms. Botelho, who wrote and directed the film for a class at University of Rhode Island. “But the heart of the movie is based on the real thing.”

The movie had what Ms. Botelho calls a “soft opening” in December at URI. She used that first screening to find the mistakes, she said, and fixed them before the Fairhaven showing.

The crowd on Friday was attentive and positive. The professional quality of the movie was evident from the first few seconds. Locations include Fairhaven town hall, an apartment in Dartmouth, and sites in Matta­poisett, New Bedford, and Rhode Island.

Casting was also chosen very carefully. Ms. Botelho said they received more than 300 applications for actors. She chose carefully to pick the hardened police officer, who is just a bit older, and the younger officer, who has not been hardened by the job yet.

During the question and answer period, several people applauded the film, Ms. Botelho and her crew, and the courage to tackle a tough subject.

Ms. Botelho told a story of Mr. Sa hanging from a rafter to hold a light. 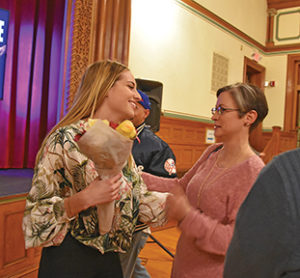 L-R: Alyssa Botelho accepts flowers from Tammy Galligo after the screening of Ms. Botelho’s movie “Junkie” to a nearly full house of 130 people at Fairhaven town hall on Friday, 1/10/20. Photo by Beth David.

Turns out, he really did know what to do to change it up.

He admitted he did not read the script first, but decided it was better in the end because he moved some stuff around, split up a scene that was at first one piece, and made other changes that he might have felt constrained from making if he had read the script.

In response to a question about budget, Ms. Botelho admitted that it can be intimidating to think that movies can cost hundreds of thousands to dollars to make.

“I’m a firm believer that it’s the storyline that makes a film more than the budget,” said Ms. Botelho.

Mr. Campbell told the crowd that he noticed the directors/movies he liked the most were the ones with the most interesting camera work, so he naturally gravitated to photography. In the past, he did a lot of moving shots. He also said, though, that the subject matter of “Junkie” and the scenes made him decide that static shots were best to “capture the tender moments.”

Ms. Botelho said her mother got her a library card when she was two days old. She always looked at plot, narrative, character development. Then in high school, she learned how to make stories become magical through film. 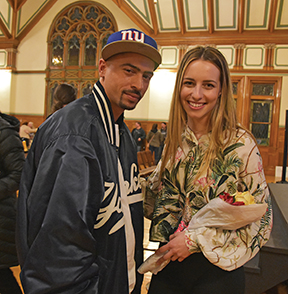 L-R: Robby Ro Grafals, who wrote a song for the movie, poses with Alyssa Botelho after the screening of Ms. Botelho’s movie “Junkie” to a nearly full house of 130 people at Fairhaven town hall on Friday, 1/10/20. Photo by Beth David.

Ms. Negalha said she started “really” getting into makeup in high school, and it just “flourished.”

Mr. Sa said that he and his friends in middle school used to make short  films “all over the place.” Then in high school it continued.

At its heart, the movie is about the ability to see a person when others just see a “Junkie.” That is part of the reason she kept the harsh title.

“Some people can see past out­ward things to the people inside,” said Ms. Botelho.

“You’re message is so simple,” said Fairhaven’s Health Agent Mary Freire-Kellogg, and suggested that the movie be shown in schools.

Jordan Richard helped with the film, she said, and was surprised when the coffin scene was split into segments. At first, she was sure she would see….oh, well, we don’t want to be spoilers here, so we won’t say.

Several people commented on how realistic the depictions of the two addicts were. Ms. Negalha and Ms. Botelho said they did a lot of research on how drugs affect a person’s appearance.

Ms. Negalha said she had a color palette for each character, with the neutrals and muted colors going for the character who had been into drugs longer, and using a little more color for the character just getting into the lifestyle, the person with a little more hope. They researched the way different colors affect people, and what they mean.

So, did Ms. Botelho search the faces of her hometown audience looking for clues, or did she watch the film?

She watched the film, she said.

“I was looking for more issues to fix.”

But don’t worry, they had cameras facing the audience. She’ll catch you later.

Maria and Manuel Negalha attended the event to support their granddaughter.

A scene from Fairhaven resident Alyssa Botelho’s the movie “Junkie” showing main character “Whitty,” played by Alessandro Gian Viviano, in his apartment before he gets a phone call that sets off series of decisions that ends up with his arrest, shown during a screening of the the 20-minute short film to a full house of 130 people at Fairhaven town hall on Friday, 1/10/20. Photo by Beth David.

Mr. Negalha said the movie should be shown in high schools to say, “Wake up! This could happen to you tomorrow.”

Maria Negalha said that her grand­daughter does makeup for people attending special events, like weddings.

“It’s so good to see kids to stuff like this,” said Maria Negalha. “It touches the heart.”

Ms. Botelho has submitted the movie to the Toronto Independent Film Festival and will submit it to as many as she can afford to go to, she said. They do cost money to enter, after all.

Ms. Botelho used IndieGoGo.com and other donations to fund the movie. Most of the $3700 raised went to hotels, travel and pay for the actors, who were from New York City. The money was also used for set design, wardrobe, costumes, and food.

To learn more about the film, visit the movie’s Facebook page @JunkieShortFilm or the IndieGoGo page at https://igg.me/at/junkie-film.

DVD will be available soon, and the movie will be posted online in the fall. To order a DVD, email Ms. Botelho directly at aabotelho13@gmail.com.

The event’s question-and-answer period will soon be available at www.FairhavenTV.com on the Fairhaven Community Media page.