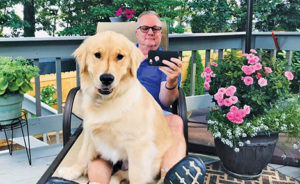 Fairhaven Town Meeting member and Finance Committee member Kevin Gallagher posts a picture of himself and his best friend on Facebook on 7/25/20 in response to Selectboard member Bob Espindola’s request for people to post photos of themselves as they get ready to participate in the town’s first ever remote Town Meeting. Photo from Facebook Hometown Fairhaven Group page.

With only a few minor amusing glitches, such as a town meeting member or two hitting the button to be recognized by mistake, Fairhaven’s first virtual annual Town Meeting on Saturday, 7/25/20, went off without hitch…well, not much of a hitch…on Saturday. One of the videos got a little fussy, leading to an unplanned break. And a more amusing glitch was one Jay Simmons not being able to vote via the Zoom voting function, so he had to vote by chat, leading Town Moderator Mark Sylvia to double check and repeat his vote on most articles.

All in all, though, with 139 members logged on, the meeting worked out pretty well. One of the changes allowed, due to COVID-19, was a lowering of the quorum to as low as 10% of the regular number. Fairhaven’s quorum for TM is 100, and Mr. Sylvia lowered it to 40

The pared down warrant funds town operations through October, when Special TM will be held.

Due to the COVID-19 crisis, revenue from the state is uncertain, and sales receipts from permits and meals and hotels taxes are also uncertain.

The Selectboard had already approved a 1/12 budget for Fiscal Year 2021 (FY21) to get the town through July. The warrant on Saturday included spending for the rest of the quarter.

Despite a little discussion on a couple of items, all spending amounts passed as listed in the warrant.

School Committee member Stasia Powers posts a picture of herself and her family on Facebook during on 7/25/20, in response to Selectboard member Bob Espindola’s request for people to post photos of themselves as they get ready to participate in the town’s first ever remote Town Meeting. Photo from Facebook Hometown Fairhaven Group page.

TM members also approved Crow Island for a zoning change from residential to Mixed Use, allowing the new owners to proceed with plans to get a special permit to run a function hall business on the island.

Mr. Sylvia began the meeting by thanking everyone who put in the extra time and effort to make a remote meeting possible.

He said he wished the circumstances were different, and noted that TM members have gathered in person to conduct Fairhaven’s business since 1812.

The Special TM in the fall will most likely also be remote, said Mr. Sylvia.

And although the lessons learned from the first remote TM will help for all future Town Meetings, he said, “We hope it will be the exception and not the rule. But right now, it’s what’s before us.”

In his opening remarks, Selectboard chairperson Daniel Freitas also thanked the technology team, Mr. Sylvia and TM members for “your willingness to adapt to this new way of doing business.”

He then summarized the accom­plish­ments of the board and the town over the last year, including dredging the harbor, a $4.6 million project that will cost the town $89,000; the creation of the fiber optic network for the town, which has created more reliable connectivity for town offices; grants of more than $1 million; solar panels on town properties that have saved the town money; a new emergency alert system, and more.

Mr. Freitas also noted that the town has $12.8 million in reserves, putting the town in very good shape to weather the current crisis.

He also noted that the four-month operating budget TM was about to vote on, used last year’s numbers plus contractual obligations for four months.

Article 1, which usually gets a chuckle from someone somewhere, instructs the Selectboard to appoint a “Measurer of Bark and Wood.”

Town Administrator Mark Rees said the position “harkens back to colonial days and is “more of an honorific these days.”

He said the town has left the position in place “to remind people of the long heritage of the town, harkening back to colonial days.” 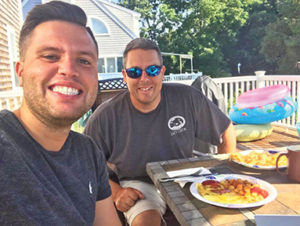 L-R: School Committee member Kyle Bueno and SC chairperson Brian Monroe post a picture of themselves on Facebook on 7/25/20, in response to Selectboard member Bob Espindola’s request for people to post photos of themselves as they get ready to participate in the town’s first ever remote Town Meeting. Photo from Facebook Hometown Fairhaven Group page.

Don Collasius, who lives on William Street near town hall, voiced his concern about the tree warden’s lack of attention to two trees that Mr. Collasius wants surveyed. He has voiced is concern in public meetings before, but at TM he said, “this tree warden has broken his word numerous times.”

He asked if the tree warden’s pay should be cut, or if they should give him a promotion.

Mr. Rees noted that the tree warden’s calls are recorded and tracked, due to a new system the IT department set up a few month ago.

She urged TM to vote “no,” but her plea was in vain.

The main budget article, which set the operating budget for all town departments, including the schools, through October, garnered a bit of discussion, but only on a couple of items.

A video by Mr. Rees explained 1/3 budget process. He said before COVID-19 hit, he has submitted a budget of $52.7 million, which was 2.5% over FY20. Because of COVID and the budget uncertainties, the town is now using last year’s numbers, plus contractual obligations.

Rich Griffiths asked why the town would be budgeting for snow and removal in a 1/3 budget that only went to October.

Mr. Rees explained that they used a mathematical formula for all departments.

“Sometimes we get snow and ice in October,” said Mr. Rees.

Ms. Szala also questioned by the salary line item for the Finance Director’s office was so high.

Mr. Rees explained the formula, but Ms. Szala said the numbers just did not seem to work.

“I still can’t get to that figure,” she said, saying that no other department had that kind of increase, of $34,885.

Mr. Rees said he could “only reiterate” that there are some costs that are in the first part of the FY, and he would review the numbers with her before the Special TM in the fall.

Ms. Szala also questioned why the wind turbine account required a $100,000 increase. Mr. Rees explained that the WTs produced more electricity. The town buys the electricity from the WT company and then sells it back to the grid. If the town buys more, it sells more, so it is a net gain.

“How can we possibly vote on a spending budget with no idea of the revenue the town will receive,” asked TM member Robert Grindrod. “Where is the revenue side of the budget?”

Mr. Rees said the town had enough from quarterly property tax payments to get the town through to October. He said state aid will be retroactive.

He also noted that the town was being “very conservative” with the budget.

“We are in pretty good financial health at this time to weather the storm,” said Finance Committee Chairperson Padraic Elliott.

Mr. Griffiths also tried to get the snow and ice removal line to zero, from $15,000.

Mr. Griffiths used the new technology to type out his amendment.

He admitted it was a “modest amount of money.”

“But it has a certain measure of absurdity to it,” said Mr. Griffiths. “I don’t have my rubber stamp with me anymore, so I’m inclined to reject this one.”

Ms. Szala also pressed town officials on whether or not they anticipated a reduction in services, but was unable to get an answer on that one.

“That is a concert that is shared with you,” said Mr. Elliott, but also said he was feeling “confident” in the steps the town has taken so far.

He said Mr. Rees went to the unions to ask them to hold off on raises, but they refused.

Mr. Griffith’s amendment to reduce the snow and ice budget to zero was rejected, and the main budget passed.

TM also approved the borrowing article for $2 million for design and engineering costs and some upgrades to the wastewater treatment plant (WWTP) to comply with nitrogen removal requirements for discharge into the harbor.

Public Works superintendent Vinnie Furtado said the town needs to meet a number of deadlines for the WWTP upgrade to be completed by 2025. The town of Mattapoisett will also pay 16% of all costs associated with the final upgrade.

Mr. Furtado said the final plan will include a way to “resurrect” the digester, which has been dormant. He said it will help keep user costs down.

The rezoning of Crow’s Island also created some discussion, with those living along the harbor very conc­erned about noise that would come from the new venue.

The new owners of the 2.3 acre island want to create a function hall for up to 300 guests for hosting corporate outings, weddings, and other special events. The plan would be subject to the special permit process granted by the Planning Board.

TM saw a presentation that showed the location of two tents and the launch route. Parking for guests would be at the former Candleworks and the Whale’s Tooth lot.

The property would tie into the town’s WWTP.

Town Planner and Economic Development Director Paul Foley explained that the details will be worked out during the special permit process.

TM members had many concerns about noise, parking, and traffic from boats traveling to the island instead of using the launch.

Mr. Foley said the owners agreed to build a band shell that would direct the noise back to New Bedford, which is farther away and is more commer­cial than the Fairhaven side.

Mr. Griffiths asked what the benefits to the town would be. He said all the connections seemed to be to New Bedford, not Fairhaven.

Mr. Foley said there would be commercial taxes and activities going on there. He said he expected a connection to the hotel in Fairhaven, where people would want to stay, and restaurant activity.

“It looks like all thos advantages will be in New Bedford, not Fairhaven,” said Mr. Griffiths.

The 2.3 acre island sits in the harbor near Pope’s Island and is only accessible by boat. It has a single residence on it, and the former owner lived there for decades.

The rezoning passed by the required 2/3 margin.

Article 4, the amendment to the flood zone map required by FEMA (Federal Emergency Management Agency), was passed over, as FEMA changed its deadline.

The TM warrant and the 2019 annual report are available online at https://www.fairhaven-ma.gov/town-meeting