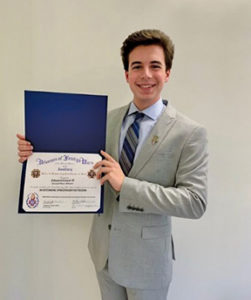 Edward Gonet IV of Fairhaven holds up the award he won for second place in the annual Mass. VFW Voice of Democracy Scholarhip Competition, which was announced on 1/31/21. Submitted photo.

Edward Gonet IV of Fairhaven was awarded second place in the annual Massachusetts VFW Voice of Democracy Scholarship Competition sponsored by the State Veterans of Foreign Wars of the United States and its Auxiliary. State winners were announced during a Zoom event on Sunday, January 31, 2021. The National theme for this year’s competition was “Is This the Country the Founders Envisioned?”

Edward, a Junior at Old Rochester Regional High School, took first place at the local level and was sponsored by Fort Phoenix VFW No. 2892 and its Auxiliary, Fairhaven.

His audio-essay was then entered into the District (Bristol County) contest, where he earned first place honors. As the District winner, he qualified for the State competition, with the judging being held this past January.

He is an honor student, active in school activities, including the co-founding of its DECA Club in 2019 and being accepted into the South Eastern Massachusetts Music Edu­cators Association (SEMMEA) District and All-State Choruses.

Established in 1947, the VFW Voice of Democ­racy Scholarship competi­tion provides high school students with the unique opportunity to express themselves regarding a democratic and patriotic theme.

Nearly 64,000 9-12 grade students from across the country enter each year, where more than $2 million in educational scholarships and incentives are awarded through the program. The National winner receives a $30,000 scholarship.c•••