The Fairhaven Selectboard un­veiled an updated emergency pre­pared­ness plan at its meeting on 6/26. Changes to the plan include a more defined hierarchy for decisions and an explanation of the various parts of the plan.

The board held the meeting at the West Island Improvement Association community house, an annual tradit­ion for the “hurricane meeting.”

The plan, however, addresses more than hurricanes, stressed officials. It will be used for all emergencies, including natural, such as floods, blizzards, storms; and those caused by humans, either on purpose or by accident, such as explosions, crashes, or power blackouts.

The plan formally lays out steps in four phases of an emergency: Mitigation, which includes strengthening building codes and shoring up coastal areas; preparedness, which includes monitoring storms as they move up the coast; response, including opening shelters or ordering evacuations; and recovery, which includes helping people get back home, clearing streets, etc.

All departments were repre­sented to summarize their pieces of the plan.

Fire Chief Timothy Francis made his annual warning to town residents saying that the causeway may go out and that would mean that first responders will not be able to get to islanders during a hurricane or other big storm.

“Get off the island,” said Mr. Francis in his annual plea.

He also made a plea to people who hook up generators, saying they must be hooked up properly or than can cause a feedback charge that can seriously injure electrical workers.

He said the Fire Department has checklist at the station and on the website to help people be ready for storms.

“We just want people to be prepared,” he said.

The town will also use a reverse 911 system. People should contact the fire department to have cell phones added.

Council on Aging Director Anne Silvia also noted that her department is actively looking into moving the shelter from the middle school to the senior center.

Town Administrator Mark Rees said that a study is being done to look at the feasibility of using the Senior Center as the shelter, with pets being accommodated at the Recreation Center, which is in the same building. as of now, people with pets need to use a regional center.

No members of the public com­mented on the emergency plans.

In another matter, the board heard from a representative of Melanson  Heath, to report on the town’s annual audit and Moody’s Bond Rating. The town received a “clean opinion” and the books are in good shape, said Frank Biron, CPA, Managing Shareholder

He said the town’s new financial policies fare well with bond rating agencies. The town has an AA2 rating with Moody’s.

Mr. Rees emphasized that the clean opinion is very rare. He commended Treasurer/Collector Wendy Graves and staff, along with the town’s long standing conservative fiscal practices for the good report. The report will be available on the town’s website.

The town also recognized Antone “Tony” Medeiros for his many years of service as Tree Warden. The board presented Mr. Medeiros with a plaque and citation.

“I’m glad I had the job,” said Mr. Medeiros, speaking reluctantly after many shouts of “speech, speech.”

“I served the town well, I think,” he said. “This is greatly appreciated. Thank you.” 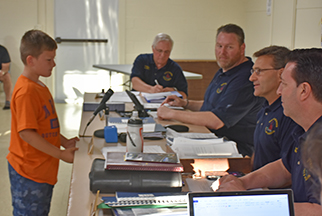 Connor Wotton faces the Fairhaven Selectboard on 6/26, to donate $100 for the animal shelter that he collected in lieu of presents for this birthday. Photo by Beth David.

Seven-year-old Connor Wotton also made an appearance in front of the board.

Young Connor gave up his birthday gifts, instead inviting his friends to donate money that he turned over to the Fairhaven Animal Shelter.

He collected $100 that was accepted by the board on Monday night.

“It’s a very honorable thing you did, young man,” said Selectboard chairperson, Bob Espindola. “It shoed a maturity beyond your age.”

Selectboard member Charles Murphy, likewise heaped praise on the youngster, telling him it was very generous.