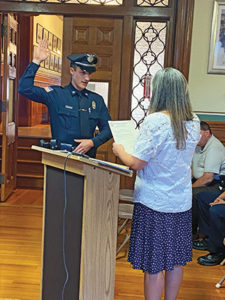 Zachary Vieira holds up his right hand as he is sworn in by Acting Town Clerk Linda Fredette at the Fairhaven Selectboard meeting on 7/28/21. Photo by Jean Perry.

Select Board member Bob Espindola was voted chairperson during the July 28 meeting, followed by the nomination of board newbie Stasia Powers as vice-chair.

When Select Board member Keith Silvia nominated Ms. Powers as vice-chair, she was visibly surprised.

“Are you sure you’re not interested?” Mr. Espindola asked Mr. Silvia, suggesting that he was going to nominate Mr. Silvia as vice-chair.

Mr. Silvia replied that Ms. Powers’s 14 years on the School Committee was enough to merit the nomination. Later during the meeting, when the board would grant the special event permit for the South Coast Bikeway Alliance’s September 12 Pedal for the Path fundraiser, Ms. Powers would act as chair during her first meeting as on the board when Mr. Espindola, a member of the alliance, recused himself.

Tree Warden Don Collasius was listed on the agenda to talk about tree warden issues and began by asking, “Who do I report to?”

“So, the voters are my boss,” said Mr. Collasius.

He followed with questions con­cerning insurance and liability on behalf of his part-time workers should they get injured during the job. He then asked Interim Town Administrator and Finance Director/ Treasurer/Collector and apparent Director of Human Resources Wendy Graves about said coverage looking for specific information and amounts. She could not provide him with the answers.

Mr. Espindola suggested that Mr. Collasius could have submitted those questions ahead of the July 28 meeting, and Mr. Collasius said that he did in a July 9 email but did not get any response from Ms. Graves, who shook her head ‘no.’

Mr. Collasius wanted to know if one of his workers dies on the job what compensa­tion would their family receive and what is the level of exposure to the Town?

Mr. Collasius gave his interpreta­tion of Mass General Law Chapter 87, stating that he is responsible for shade trees on town property, but when “A shade tree lying on the ground provides no shade.”

Given the discrepancy between how Mr. Collasius interprets the law and what the Town believes are his responsibili­ties, Mr. Espin­dola sug­gested that town counsel should be con­sulted to resolve the matter im­medi­ately; however, Mr. Collasius said that he asked for access to town counsel and was “stymied.”

Ms. Graves said that she had “gone above and beyond to help” Mr. Collasius.

When he complained that she did not respond fast enough, Ms. Graves said she gets too many emails every day, and when she seeks advice through a listserv, it can take days for other municipal employees on the listserv to answer her question.

She added that she was on vacation the week Mr. Collasius contacted her, “And I deserve to have a vacation.”

Public works Superintendent Vincent Furtado spoke via Zoom and said the Board of Public Works realizes that Mr. Collasius has concerns; however, during a storm or emergency, the public works department only moves a tree limb to the side of the road until the tree warden can tend to it.

“That’s the way we have always done it,” Mr. Furtado said. He agreed that there should be a tree depart­ment, more than a tree warden and a “random two people” that may or may not be available at the time to come into work.

Ms. Powers said she hoped to resolve the issue through collabora­tion. The police and fire chiefs both confirmed that tree limbs blocking the roadway would generally be pushed aside until the tree warden was available to remove it.

The board agreed to review the liability insurance and workers’ compensation to ascertain whether there is any risk to the Town and revisit the matter at a later time.

Earlier in the meeting, BPW member Marcus Ferro approached the lectern and spoke as a Precinct 4 member expressing his main concern about the tree warden. Mr. Ferro cited M.G.L. Chapter 87, which he said “makes clear” that the tree warden is responsible for the care and removal of public shade trees and that he supports creating a tree department under the Department of Public Works.

He said he supported Mr. Collasius’s prior recommendation of a tree department under the over­sight of the BPW.

“But now all I’ve seen are [social media posts] and soliloquies” on what Mr. Collasius thinks the tree warden’s responsibilities are, said Mr. Ferro.

Mr. Ferro said in his opinion, that Mr. Collasius is an “elected official looking at ways to not do their job” and then further added, “A resignation might be a more palatable option.”

The board also heard from  Precinct 4 Chairperson Paul Foster, during the board’s precinct meet and greet and said that while he did not have a chance to contact a significant number of Precinct 4 residents ahead of the meeting, the feedback and concerns he has heard related to the “craziness over the appointment of the town administrator.”

Mr. Foster said many residents believe the new permanent TA should be qualified and possess adequate experience. He mentioned concerns over adequately funding town departments and keeping an eye on the tax rate.

In other matters, the board briefly discussed changes to the Rogers Re-Use Committee mission statement and the composition of the commit­tee, increasing it from a five-member committee to a seven-member, to include a member from the Economic Development Committee, the Plan­ning Board, and the Finance Committee.

Ms. Powers noticed that the website specifies that Director of Planning & Economic Development Paul Foley is the staff representative and contact person for Rogers Re-Use matters, which Mr. Espindola emphasized should be followed when developers, engineers, or consultants attempt to communicate with the Town.

Committee member Susan Loo clarified that committee members have never served as the point person for contact with interested parties, and responses to requests for proposal (RFPs) have always gone directly through the Town, not the committee.

“They always went to the Select Board, and the Select Board would pass them onto us…. That really needs to be clarified,” said Ms. Loo. “No RFP ever came directly to us. None. None.”

She added that there is ample “misinformation out there” saying otherwise.

Earlier in the meeting, Mr. Foley discussed the possibility of receiving funding for the future of Rogers School from a MassDevelopment grant to fund a new feasibility study to update the projected costs involved in developing the old school and bringing it up to code for future use.

He added that funding could also go toward the RFP process. His preference would be to apply for up to $50,000 to accomplish a combina­tion of both objectives. Any request for over $50,000, he said, would require a community match of funds. He also specified that if the Town accepted the grant money and then later sold the school property, the Town would have to return the money to the state. He will submit the application by the August 6 deadline with the support of the Select Board.

Mr. Foley also mentioned that the Economic Development Committee is looking for new members and people send letters of interest to the Select Board by August 9.

Also during the meeting, Acting Town Clerk Linda Fredette swore in the Police Department’s newest full-time officer, Zachary Vieira. Mr. Vieira has a bachelor’s degree in criminal justice, is a certified 911 dispatcher, and has served as a part-time officer in Fairhaven for some time. He graduated from the Plymouth Police Academy on July 23.

Police Chief Michael Meyers said Mr. Vieira did an “outstanding job” at the academy, even smashing the academy’s 20-years long speed record for the 1.5-mile physical standards requirement, winning himself a special award. The standard is to complete the distance in under 13.5 minutes, but Mr. Vieira finished in 7 minutes and 42 seconds, beating the record of 7 minutes and 58 seconds.

“He made us proud, and he made Fairhaven proud, that’s for sure,” said Chief Meyers.

“I’m just very excited to support the community where I grew up, and I’m looking forward to the journey,” said Mr. Vieira.

In another matter, Ms. Graves reported that there would be some changes for the upcoming tax possession auction scheduled for Tuesday, September 28. The list has changed due to the Conservation Commission’s interest in retaining some of the properties, and some additional properties were added to the list.

During the board’s reorganization, the board reassigned the appoint­ments of former SB member Dan Freitas, who was recalled in the7/26 election. Board members approved all except the role of contract compliance officer. When asked what the duties are of that role, Ms. Graves was unable to inform the board. That appointment will be taken up at the board’s next meeting to get a clarification of the duties.

The board granted a special event permit for the Turkey Trot 5k on November 25, Thanksgiving morning. The event collects canned goods and non-perishables for the Shepherd’s Pantry in Acushnet.

In light of Zoning Board of Appeals member Joe Borelli’s resignation, the Town will advertise for a new associate member. Those interested in serving may send a letter of interest to the Select Board by August 5.