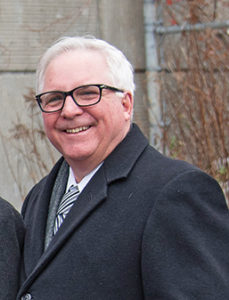 Fairhaven Town Administrator Mark Rees at a bridge dedication ceremony on 12/4/19. He has since grown a beard, but with the COVID-19 restrictions, the Neighb News hasn’t been able to snag a picture of him with his mask off. Neighb News file photo by Glenn C. Silva.

He recites a long list of accomplish­ments, sings the praises of town officials and employees, and grew to like the community so much that he and his wife bought a house here and have officially moved here full time.

The last couple of years have clearly seen some turmoil, with what looked like tension on camera in meetings with elected officials, a pandemic, economic uncertainty, and some long time employees retiring. But Mr. Rees would not go negative in a phone interview, not the least bit.

He said he had the opportunity to work with some “very dedicated and hard working department heads and employees, and we were able to accomplish a lot of good things for the community.”

He said they enhanced service to the community in a variety of ways, including a revamp of the emergency response system; rolling the Emer­gency Management Agency into the Fire Department; implementing the RAVE system, which is a modern alert system for residents; working to mitigate the effects of natural disasters; received a grant to analyze risks and benefits of existing infra­structure; and…well, you get the idea. 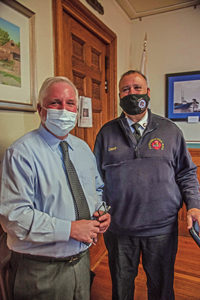 The town is a designated “Green Community” with the state and, as such, has already reduced its energy consumption “signficantly.”

Policing has also been more responsive to resident concerns, such as traffic and speeding.

“The police department has put together a comprehensive approach toward’s that,” he said, admitting, though that not all residents are thrilled with the increased traffic/ speeding enforcement. “You can’t deny we’re out there more.”

Under his tenure the town also implemented a capital improvement plan, increased road spending, and brought back some services that had been suspended, such as leaf collec­tion in the fall.

Being the first TA in a town that had a different type of structure could not have been easy, right?

In some ways, it was easier to do certain things, he said. In other areas, it was more difficult.

Not having a TA form of govern­ment allowed him to build a leadership team.

“One positive is that the town had very well qualified department heads,” he said, who welcomed the opportu­nity to work together. They “really blossomed,” he said, because they had someone to go and build the relation­ships among the different departments.

The best example, he said, is the information technology department that is shared between the school and the town hall.

The difficult part, he said, was created the strong chain of command along with the continuation of elected boards with a certain, and sometime ambiguous, amount of autonomy, such as Board of Health and Board of Public Works. 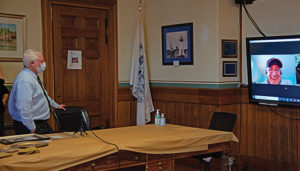 Fairhaven Town Administrator Mark Rees speaks to Principal Assessor Del Garcia, who’s on the big screen at town hall on Thursday, 1/7/21, during a send-off for Mr. Rees who retired on 1/8. Photo by Glenn C. Silva.

“But, I think we were able to overcome that by building bridges.”

He said there are a few things that he was not able to finish, but hopes they will get done, such as the town-wide personnel policy, which is close to being finished. The town did implement a new wage classification plan that did not exist before. That is critical, he said for people to get paid similar amounts and be competitive in the marketplace.

The fate of the Rogers School building is still limbo, but the Oxford School Building project should start construction in the spring.

As for the next phase?

“I’m going to take a break to be honest with you,” he said. “I’ve been doing this work for 40-plus years. I think I deserve time away, to read some books, play some golf, enjoy my new house. My wife and I are really looking forward to our years of retirement in Fairhaven.”

So, Fairhaven’s famous politics-as-bloodsport didn’t scare him away?

“It really is a great town,” said Mr. Rees. “The job is what it is. You know that going in. It’s a very nice town with a lot of very friendly people, a lot of historical and natural beauty. We always wanted to live near the water. This is our dream come true.”

Mr. Rees lives with his wife Beth near the center of town. 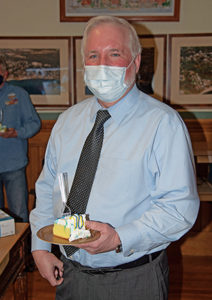 Fairhaven Town Administrator Mark Rees grabs a piece of his retirement cake at Town Hall on Thursday, 1/7/21, during his send-off, the day before he retired. Photo by Glenn C. Silva.