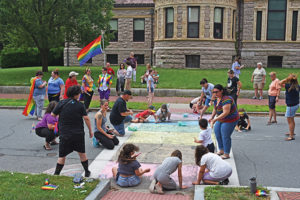 People attending the Fairhaven’s Got Pride event on 6/27/21 decided to re-chalk the crosswalk between Fairhaven Town Hall and the Millicent Library in the rainbow pride colors after the speechmaking. Photo by Beth David.

After two of the three Fairhaven Selectboard members voted not to display the LGBTQ pride flag at town hall, and then followed up by rescinding the town’s entire flag policy, a group of citizens decided to take action. Led by Diane Hahn, a well-known activist and agitator, a group organized a pride event in just about two weeks. On Sunday, 6/27, about 150 people showed up in the streets and sidewalks around Fairhaven Town Hall to show their support, and to be supported by the community (see letter on page 25).

Four people were scheduled to speak, but then five or six more decided to take the opportunity to tell their stories to the crowd.

Before the speechmaking, Ronnie Manzone, a transgender woman who is an elected member of the Fairhaven Housing Authority said she was there “celebrating pride.” 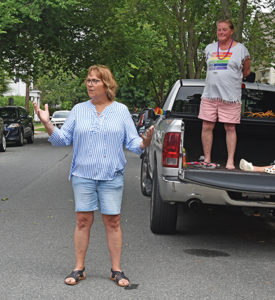 Ronnie Manzone, a transgender woman and elected member of the Fairhaven Housing Authority, speaks at the Fairhaven’s Got Pride event on 6/27/21, while Diane Hahn, an organizer of the event, listens. Photo by Beth David.

“It’s a beautiful thing,” she said. “People coming together, caring about each other.”

She said it’s the Fairhaven she believes we are.

Ms. Manzone said her story of transitioning was smooth compared to so many others. Already a well known figure in town as she had been a Selectboard member, is on the Board of Assessors and has been for many years, and is still a reserve police officer and a corrections officer, she said, “Sometimes I’m embarrassed” at how accepting it was for her.

“I love this town,” said Ms. Manzone when she addressed the crowd, adding that people need to take care of each other and fight for each other.

“I’m here to report that we’re a loving town,” said Ms. Manzone. “I’m trans, and I’ve never been happier in my life.”

She said she was always “Ronnie,” and is still Ronnie. When she told everyone at her various jobs, it was “news,” she said; when she told one person at a pizza joint, it was all over town in minutes.

“Everyone embraced me,” she said. “We are in a town that loves us.”

“My daughter’s an Eagle Scout,” said Laurie Despres, to explain that she had a son who is now a daughter, Carrie..

She said it was very stressful for Carrie. The family knew through her teen years that something was not right, but they could not figure it out.

Eventually, she told them she was trans. She told them at a dinner, and the family accepted it in stride.

The big question was, are we still going camping?

Ms. Hahn started the speechmaking portion of the program and said she was “deeply troubled” by the selectboard’s actions.

She said the day was not only about LGBTQ pride, but also for other marginalized groups, including people with special needs and people of color.

In keeping with that sentiment, Charlie Murphy, whose organization MO LIFE works with special needs adults, led the speaking roster. 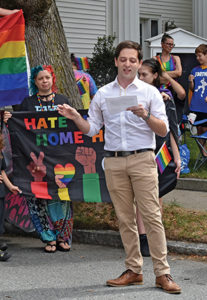 Travis Rapoza speaks at the Fairhaven’s Got Pride event on 6/27/21. Photo by Beth David.

“He said as a community, we can “work for justice each day, we can work for equality each day, we can respect one another. We do not have to be the same, regardless of our race, our abilities, our sexual orientation, our political beliefs, we are all the same.”

He said he prayed for the community every day and prays that we work for justic and inclusion and for accepting diversity and peace.

“We are a fair haven and we need to  keep it that way,” said Mr. Murphy. “Stay strong fair haven, you are making a positive difference.”

Fairhaven High School graduate Travis Rapoza told the crowd he was a closeted boy growing up in Fairhaven. There were no flags at town hall and the only gay person he knew of was Ellen DeGeneres because even celebrities were afraid to risk their careers.

“I felt like a stranger in my own body,” said Mr. Rapoza. “I didn’t have any role models to look up to, any television shows to relate to, and no community to turn to.”

Teenagers are going through a lot anyway, he said, so figuring out sexuality on top of it all is “pretty overwhelming.” So, he spent much of his life “living a lie,” he said. “Because I was too afraid of being true to myself.”

All of the fear centered around being afraid that people would not be supportive.

“At our core, all any of us members of the LGBTQ+ community are looking for is acceptance,” said Mr. Rapoza. “No more, no less.”

Over the years, said Mr. Rapoza, things have changed, more people have come out, LGBTQ+ people are depicted in movies, and some very brave people paved the way. He told the crowd that it is important to support the LGBTQ+ community, and cited the statistics of high suicide rates and attempted suicide among LGBTQ+ youth.

“Every member of the LGBTQ+ community is born into the closet, and we don’t get to choose what house that closet is in,” said Mr. Rapoza. “Some families don’t every want that door opened. And that’s why the door to our community must be open to all.”

The pride flag is an important symbol he said and flying it is important.

“Flying the pride flag at town hall would show that Fairhaven, as a community, is inclusive, and supports a group of marginalized people who have spent most of history either hidden away, denying our existence, or out in the streets, fighting for equal rights under the law,” said Mr. Rapoza. “It would let me and other members of the LGBTQ+ commu­nity know that we are supported and welcome here, and signify to other communities that we support the LGBTQ+ community and our right to live our lives openly and proudly.” 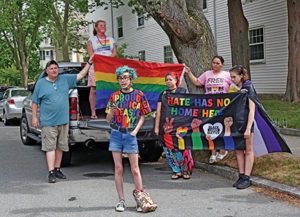 Jordan Richard speaks at the Fairhaven’s Got Pride event on 6/27/21 while volunteers hold up the pride flag and a banner stating “Hate has no home here.”. Photo by Beth David.

Jordan Richard was also a featured speaker, telling the crowd that it was not that long ago that they* were sure they were straight.

“But that just goes to show that self-discovery is a process,” said Richard, adding that the most important thing on the journey is kindness, for those going through the journey and those who know them. “If this is something you’re going through right now, please treat yourself with love and care and kindness, because it is complicated, and it is confusing, and it is hard. It is hard to put yourself out there, and be vulnerable, and be different. And it’s hard to be proud of something that so many people would hate you for.”

There is a lot of work to be done in Fairhaven, said Richard, which is “disheartening.”

“But in another sense, it really is a beautiful opportunity that we all have…The benefit of living in an imperfect world is that we, every day, can strive to im­prove it as much as we can,” said Richard. “I do believe that anyone has the power to change the world, but I also believe that even changing one life for the better is just as beautiful. Even if it’s your own.”

Several other people spoke, including Select Board candidate Leon Correy, who told the story of a very close relative who did not come out to him, leaving him the last to know. When Mr. Correy asked him why, his friend said it would have been too devastating if Mr. Correy had rejected him, because he meant the most to his friend.

Mr. Correy said he moved to Fairhaven and was happy to find that he was not harassed by police or followed around. He chose to get involved in his new community and is committed to making diversity a priority.

“I have pride today,” he said.

*Fixes errors from previous versions. “They” not “she.”