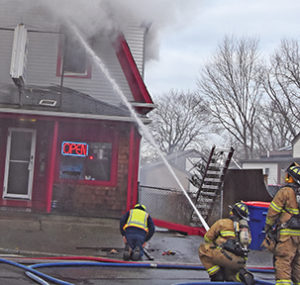 The “Open” sign blinks on as firefighters battle the blaze that destroyed Jackson’s Variety on Sconticut Neck Road in Fairhvaven on 2/3/20. Photo by Beth David.

A devasting fire destroyed Jackson’s Variety store, an icon on Sconticut Neck Road in Fairhaven, on Monday, 2/3/20. The 911 call was made around 7:40 a.m. The business has operated as Jackson’s for more than 50 years, and was Buster’s before that.

According to Kristina “Tina” Jackson, whose family owns the building and business, she was in the store working when she heard the baby monitor go crazy. The monitor was installed because her father, Colin “Jack” Jackson, lives upstairs from the store and is no longer able to walk. She went upstairs and saw flames and smoke coming from the sun room. She and her niece managed to get Jack out of bed and onto his hands and knees, but then they could not get him past the door.

They were both getting weaker, according to Tina’s husband Phil Lawrence. The niece was shooed out of the building, but Tina refused to leave.

“She couldn’t breathe, he kept telling Tina to leave,” said Mr. Lawrence. “She said ‘no.’”

The fire was growing, and the smoke was getting thicker.

“She was get­ting weak and cough­ing, he was coughing. Then them guys showed up like angels,” said Mr. Lawrence. “They showed up. I thank God every day them guys ran upstairs. My wife was not leaving her father up there.”

He said there is no doubt in his mind that the “angels” saved the lives of both Jack and Tina. 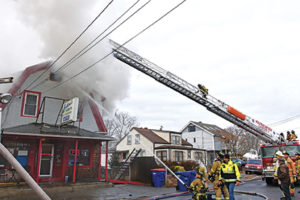 Firefighters battle the blaze that destroyed Jackson’s Variety on Sconticut Neck Road in Fairhaven on 2/3/20. Photo by Beth David.

“If it wasn’t for them guys, they’d both be dead now,” said Mr. Lawrence.

Butch Beauparland and Roberta Raymond entered the build­ing when they realized someone was inside. Soon after, Dr. Paul Fall, Ron Rock and Anthony Cogswell entered.

Dr. Fall, Mr. Beauparland, Ms. Raymond and Mr. Rock helped Mr. Jackson through the smoke and down the stairs. Anthony Cogswell also ran into the building. But he said he did not hear anyone after getting about halfway up the stairs before the smoke and fire stopped him.

There are two stairways in the back of the store leading to the living quarters, one with a stair-lift. But it was not working, presumably be­cause the fire had interfered with the electricity.

Mr. Cogswell told the Neighb News that he left the building after believing there was no one inside. Then he heard someone calling for help at the rear of the building on the north side. He helped the others and they managed to get Mr. Jackson to the edge of the property and over a chain-link fence.

Glass from breaking windows shattered on the ground near them as they made their slow way along the building. First responders arrived as they reached the street.

After the intensity of those minutes passed, neighbors stood in disbelief for the next couple of hours as they watched the Fairhaven icon burn with an intensity of its own. More than an hour later, hot spots flared up in the roof and along the side of the building as firefighters fought the blaze.

The building is a total loss. 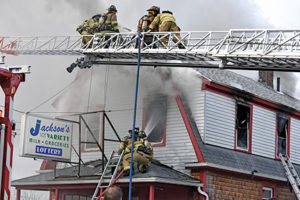 Firefighters attack the blaze through the window and get in position to cut through the roof of Jackson’s Variety, which was totally destroyed by the fire on 2/3/20. Photo by Beth David.

Inside, Mr. Lawrence said, every­thing in the living quarters was ruined.

Mr. Jackson’s wife, Peggy, 83, has been in the hospital since December, suffering from her own ailments. Mr. Lawrence said she probably did not know what happened because of her medical condition.

Bob Santos lives in the neighbor­hood and said he has been in the store many times. He said he saw a Facebook post and went outside and saw the smoke.

Dr. Fall told the Neighb News that he and the others managed to lift Mr. Jackson, but it was no easy task. He is not able to walk, so he was “dead weight,” said Dr. Fall.

He said he was not sure how they did it.

Mr. Cogswell said he was dropping his child off at school and noticed a bunch of people standing around.

“When you see a group of people, there’s confusion,” he said.

He asked if there were any people, or animals inside.

He later described it like flames you would see in a movie.

He said he then went to the other side and found the other people “dragging” Mr. Jackson out.

The “Open” sign blinks on as firefighters battle the blaze that destroyed Jackson’s Variety on Sconticut Neck Road in Fairhvaven on 2/3/20. Photo by Beth David.

And all the while the fire was raging.

He said he was worried as they walked along the side of the house. He knew they had to get away from the building.

“The glass was popping, breaking on them,” added Patricia Regan, a friend of the Jackson family, who helped direct rescuers.

“It’s scary,” said Dr. Fall, but that was after it was over.

“I didn’t even think,” he said. “I didn’t think any of those thoughts. I just had to get him out of the house.”

“I can’t believe how fast that went up,” said Dr. Fall as he watched the building burn.

Tina was next door at Mac’s Soda Bar after her ordeal.

“Thank God for those guys,” she said. “I wouldn’t have been able to get my dad down the stairs.”

And, she added: “Thank God we got that baby monitor.”

Mr. Lawrence, though, did manage to find his sense of humor, even as he watched the smoke pour out of the windows.

“You can put this in the paper,” said Mr. Lawrence. “We’re gonna have a sale in the store, and it’s all gonna be pre-cooked.” 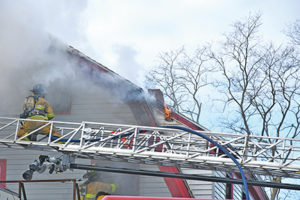 As firefighters continue to battle the blaze for more than an hour, a hot spot still flares up in the roof of Jackson’s Variety on Sconticut Neck Road on 2/3/20, when the building was destroyed by the fire. Photo by Beth David.

The fire started in the sunroom that is off the deck on the south side of the building. Deputy Fire Chief Todd Correia told the Neighb News that the fire is still under investiga­tion, but is “believed to be electrical in nature.”

Ms. Regan, who has known the family for decades and said Jack was her best man in 1973, started a GoFundMe page for the Jackson family (https://www.gofundme.com/f/jackson039s-variety-fire-fund)

She wrote: “I started the gofundme page thinking that the Jacksons would need help with ‘extras’ that the insurance co. wouldn’t cover but I found out today — and some donors suggested I share this information on an update — that NEITHER THE BUILDING, NOR THE BUSINESS, WERE INSURED. Thankful and appreciative of all the funds that have been raised so far, I got permission from Tina to share this information with you.” 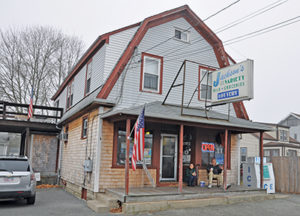 In this Neighb News file photo from Decembrer, 2015, Tina Jackson and her father, Colin “Jack” Jackson sit in front of Jackson’s Variety, with big smiles for the local free sheet. Photo by Beth David.