Well, they called his bluff. A very determined, hard-working, smart group of people have most likely gathered the signatures necessary to force a recall of Fairhaven Selectboard chairper­son Daniel Freitas (see page 22).

Mr. Freitas wrote on Facebook that it was just a small group of people, and said he would resign and not run in the recall election if they got the required number of signatures. The signatures need to be certified, of course, then it’s a 2-3 month time period to have the election. So, we’ll see.

I mean, it’s not like anyone takes this guy at his word anymore. He’s quick to yell “liar” at this newspaper and this editor, but…really, dude, look in the mirror.

Oh, and then there’s the brother. Ha! Oh my God that guy is good for some laughs. He called me an f’g liar on Facebook. No, really he did, but he spelled it out. He’s demanding, of course, that I give proof — read: reveal my sources — for saying he was a pest, er…goon, by hanging around the petition tables.

Yeah, and this is the guy who comes to your house when you dial 911. Y’know what, I think I’ll just put it here.

As for “proof,” of what I claimed last week? I don’t need to explain to you, Mr. Freitas (either one of you). My sources are protected from bullies like you. I will tell my readers, though, that I got confirmation from the police chief that at least one email was sent to them to “complain” about Mr. Freitas. Then there’s the phone call to a local restaurant. But, I digress. We’ll get to those in a week or two. Meanwhile, here’s a sample of your first responder’s work on Facebook, y’know, the guy who has to adhere to a higher standard because he’s a HEERO! 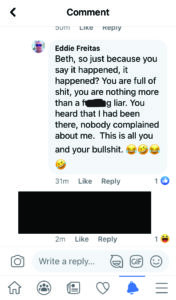 PS: I heard that at least one town employee is getting in trouble for some Facebook posts that may not comply with the town’s social media policy. Think the brother will get called in on the carpet? Or is that policy only for people the Freitas brothers don’t like? Just wondering.

Until next week then…