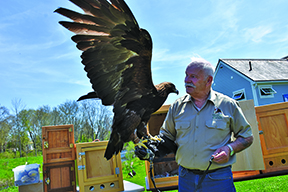 Wildlife rehabilitator Tom Ricardi handles a Golden Eagle at the first Acushnet River Herring Festival at The Sawmill Acushnet River Reserve on Saturday, 5/14. The property is open to the public from dawn to suck every day. Photo by Beth David.

By Beth David
EditorOn a brilliantly sunny day, and one of the few warm ones we have had so far this year, the first Acushnet River Herring Festival drew hundreds of people to the old Acushnet Sawmill.

When the Buzzards Bay Coalition purchased the property in 2007, fewer than 500 herring were getting through to spawn in the New Bedford Reservoir. The fish need to swim upstream, through the Acushnet River to get there, but there was a dam, and only a few hundred were getting around it.

The BBC restored the property, opened up the passageway for the fish, and created an absolute jewel of a public park in the heart of an urban area.

Last year 10,000 herring made their way upstream, said BBC President Mark Rasmussen. There once were millions, he said.

William, 8, said his favorite bird was the Golden Eagle. Oliver, 7, agreed that the “big one” was the best.

Raptor Tom Ricardi showed the crowd a Screech Owl, and a baby Screech Owl. His biggest message was: Leave wildlife alone. He said people often are mistaken when they see an animal and think it needs human intervention to survive. Usually, he said, the animal would be better off fending for itself.

Da and Lina Yua of Fairhaven were walking the trails with their dog Tulu. They said they love the Sawmill property, with its easy trails and variety of landscapes.

“It’s one of the few places where you can get into nature, without nature getting all over you,” said Mr. Yua.

Ms. Yua said they go there when it is too windy by the ocean.

They said they have seen turtles and snakes and other wildlife.

The crowd did not see any herring on Saturday, but Mr. Rasmussen said not to worry, they were there. He said they run in schools. Some had already run up the river, but others were expected.

The park, at 32 Mill Road, Acushnet, is open to the public from dawn to dusk every day. 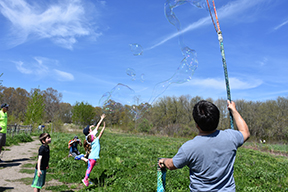 Children reach up to pop bubbles made by Mr. Vinnie the Bubble Guy. Photo by Beth David. 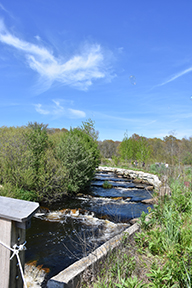