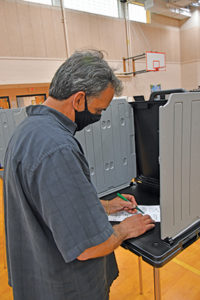 Acushnet Selecboard incumbent Kevin Gaspar casts his vote at the Acushnet Elementary School on election day, 5/15/21, when he squeaket out a win by 13 votes. Photo by Beth David.

Longtime Acushnet Selectboard member Kevin Gaspar managed to hold onto his seat, just barely, against a strong challenge by Marc Cenerizio, who currently holds a number of committee positions in Acushnet, including the elected Planning Board and that board’s appointee on the Community Preservation Committee.

The 13-vote win for the incumbent was definitely a squeaker, with 851 voters, or 11%, of registered voters casting ballots.

According to town clerk Pamela Labonte, the average is about 800–1200 in local elections.

On election day, with no real indication of how close it might be, Mr. Gaspar had a laid back attitude.

“At this point in my life, either way I’m going to celebrate,” said Mr. Gaspar. “I think the town might have more to worry about if I’m not elected, than me.

He said it would be nice to see more people participate, and pre­dicted an average turnout.

After the election, and noting how close it was, Mr. Gaspar said, “This election should be the one everyone says ‘my vote mattered.’”

Mr. Gaspar also thanked everyone who voted for him, those who held signs and those who defended him on social media, “knowing I’m not a social media person.”

Mr. Gaspar also thanked the Town Clerk’s department, and he, said, “most importantly, I want to thank my family.” 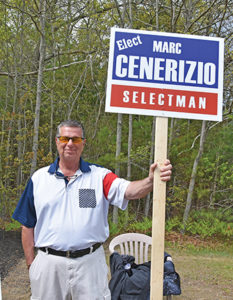 Acushnet Selectboard candidate Marc Cenerizio holds a sign at the entrance to the polling stations at Acushnet Elementary School on election day, 5/15/21, when he lost to the incumbent by 13 votes. Photo by Beth David.

“It was a close race and Mr. Cenerizio called me to congratulate me and we agreed it’s time to put the election behind us and work together,” said Mr. Gaspar.

Before the election, as he was holding a sign at the entrance to the school, Mr. Cenerizio said he felt great, and predicted it would be a close race, although it is unlikely he could predict exactly how close.

Mr. Cenerizio did not respond by press time to a request for comment.

The Selectboard race was the only contested race on the ballot.

There was no one on the ballot for a School Committee seat and a Library Trustee seat.