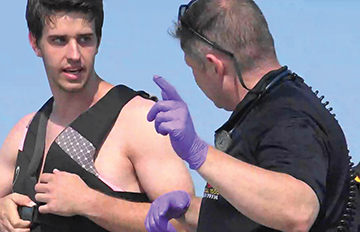 A 22-year-old Missouri man was kayaking off Winsegansett Heights last Thursday, 6/23, when his kayak overturned and he was stuck in the water.

Local officials were alerted to a man waving for help at about 3:30 p.m. New Bedford and Fairhaven responded and rescued the man and recovered his kayak.

He was trans­ported to Hoppy’s Landing, where Emergency Medical crews awaited. He refused medical treatment and walked away on his own. He was wearing a life jacket. 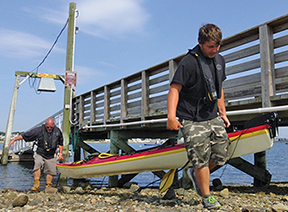 Rescue units from New Bedford, Fairhaven Fire Department and Harbormaster responded to a kayak overturned and a boater waving for help on June 23, 2016 at 3:26 p.m. Within minutes the boater was rescued and transported by boat by the Fairhaven Harbormaster, police and assistants to a waiting ambulance at Hoppy’s Landing. The 22-year-old man from Missouri refused medical treatment. He was in the 67-degree water for about 35 minutes. He was wearing a life jacket. Visit ML Baron’s YouTube page at https://www. youtube.com/watch?v=5JffvEqPv6w&feature= youtu.be for video of the kayaker returning to Hoppy’s Landing. TOP: The young man speaks to a paramedic on the dock at Hoppy’s Landing after being rescued from the water. ABOVE: Todd Cox (front) and Timothy Cox carry the man’s kayak up from the water. Photos courtesy of ML Baron.