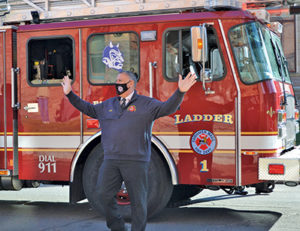 Retiring Fairhaven Fire Chief Timothy Francis waves to supporters as he exits the latter truck at town hall to receive a citation during a stop on his “last ride home” on 1/8/21. Photo by Jean Perry.

It was more than 40 years ago that Timothy Francis joined the Fairhaven Fire Department as a call firefighter. In 1982 he was appointed as a perma­nent firefighter and ascended the ranks to lieutenant in 1993. It wasn’t long before he was promoted to deputy chief in 1995, and in 1999 Tim Francis became Fairhaven’s fire chief and would serve in that capacity for roughly 21 years

On January 8, 2021, Chief Francis retired from his post, and the strident symphony of a stream of fire trucks from Fairhaven and surrounding towns through the sunny streets of Fairhaven let everyone in town know about it.

To honor the event’s significance, the town coordinated a “last ride home” for Mr. Francis from the fire station on Washington Street down through the center of town. The convoy stopped at the Town Hall steps where a socially-distanced crowd of face-masked family members, Town Hall employees, and grateful Fairhaven residents gave a round of applause for Mr. Francis’s service over the last several decades. 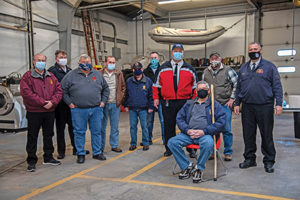 Retiring Fairhaven Fire Chief Timothy Francis (RIGHT) poses with former fire chiefs from around the region at the Fairhaven fire station just before Mr. Francis’s last ride home on the day of his retirement, 1/8/21. Photo by Glenn C. Silva.

Francis rode shotgun in Ladder Truck 1, his eyes scanning the familiar faces on the front lawn of Town Hall, and set his sights on one particular little face. He dismounted the fire truck and headed straight to a nearby baby stroller.

Those standing with the stroller suggested as Mr. Francis approached with a smile that couldn’t possibly be concealed by the mask covering half his face.

With one of those affectionate gestures still allowed during a pandemic, Mr. Francis brushed the back of his hand across his grand­child’s knee and gave it a little squeeze before ascending the stairs to the foyer of Town Hall where Selectboard Chairperson Daniel Freitas waited to present Mr. Francis with a congratulatory citation.

Mr. Francis’s list of accomplish­ments and honorable achievements is a long one, with one of his most proud being his oversight of the merging of EMS services with the fire department. 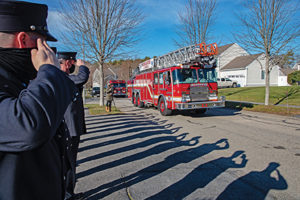 Firefighters salute as the ladder truck carrying retiring Fairhaven Fire Chief Timothy Francis pulls up to his house on his last ride home on 1/8/21. Photo by Glenn C. Silva. 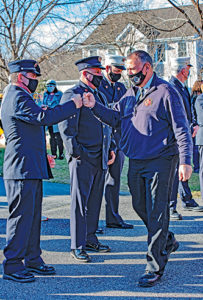 Retiring Fairhaven Fire Chief Timothy Francis goes down the line giving fist bumps instead of handshakes and hugs due to the pandemic in front of his house after his last ride home on the day of his retirement, 1/8/21. Photo by Glenn C. Silva.

Mr. Francis began the transi­tion in 1999 and worked to train all firefighters for dual certification in fire rescue and emergency medical services. He has also served as chair­per­son of the EMS Committee for the Massachusetts Fire Chiefs since 2001 and was appointed by Governor Mitt Romney to the Homeland Security Advisory Council.

Mr. Freitas wished the chief all the best in his retirement and, on behalf of the Selectboard, declared January 8, 2021, as Fire Chief Timothy Francis Day in Fairhaven.

The convoy then proceeded to Mr. Francis’s home where uniformed officers lined the street to greet him. 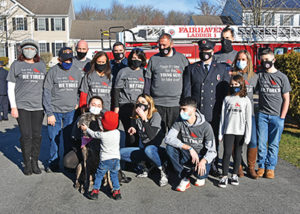 Attention turns to the little one and the dog as retiring Fairhaven Fire Chief Tim Francis (center) and newly pinned Lt. Josh Benoit (next to Francis) try to get a family photo on 1/8/21 after Mr. Francis’s last ride home on the day of his retirement. Photo by Beth David.

Mr. Francis told the crowd that he was looking at the future of the Fairhaven Fire Depart­ment and he could not be more proud, as he got emotional.

“You men and women have a great future ahead of you,” said Mr. Francis. “You’re under new leadership who’s gonna take you places way beyond where you are now.”

He told them to keep learning and to learn from their mistakes. 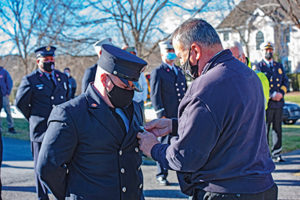 Retiring Fairhaven Fire Chief Timothy Francis pins the lieutenant badge on his nephew Josh Benoit on the day of Mr. Francis’s retirement and after his last ride home on 1/8/21. Photo by Glenn C. Silva.

He also said he would be around town keeping an eye on them, and they are there to set an example.

Chief Francis also pinned his nephew Josh Benoit, who was promoted to lieutenant.

“The town should be very proud of Tim and Josh,” said Lt. Benoit’s mother-in-law Carol Fateux. “And of course they mean a lot to the family.”

“It’s a great day,” said Lt. Paul Correia, adding the chief “elevated” the department, and the new chief, Todd Correia, and deputy chief Joy Nichols will take it to a new level due to their dedication to the department and the town. “They have good ideas, good thoughts.”

“I’’m a little overwhelmed,” said Mr. Francis after the saluting and speechmaking were over, adding that he did not want to get emotional, “but I did.” 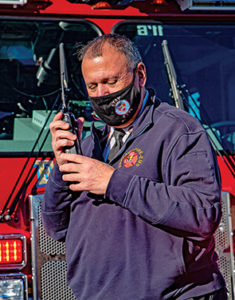 Retiring Fairhaven Fire Chief Timothy Francis signs off the radio for the last time in front of his house after his last ride home on the day of his retirement, 1/8/21. Photo by Glenn C. Silva.

His daughter Samantha said she felt very proud. The fire department has been her “second family forever.”

She said she knew her dad would miss it, but she knows she will always be welcome at the fire station.

Her brother Scott, 20, echoed the sentiment, saying he felt “blessed that I could be part of this.”

“My dad is a good role model,” said Scott. “He deserves the best.”

Scott said he, too, loves the fire department and is considering a career in firefighting, but not quite yet. He has a some school to get through.

Lt. Benoit said he was not necessarily headed in the right direction when his uncle suggested he try out being a call firefighter.

“I fell in love with the job and found my calling,” said Lt. Benoit, adding that he remembered going to the station as a kid and “being in awe.”

Beth David contributed to this report.