The Dr. CE Bert Chapter 7 of the Disabled American Veterans in New Bedford, held its annual Christmas luncheon on Sunday, taking the opportunity to praise volunteers and thank sponsors for the various gifts throughout the year. The DAV’s main focus is to help veterans get the benefits they deserve. 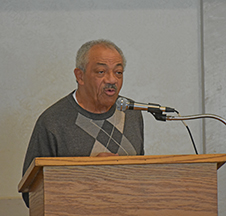 “That’s what this chapter is all about,” Commander Rodney Hunt told the crowd at the Century House. “Helping veterans.”

He pointed out several board members, and other members of the community, including Anne Silvia of the Fairhaven Council on Aging, and David Pinto, who makes it a point to be in the office almost every morning, bright and early, usually around 7.

He said that when he first became commander, board member Bill Comeau was his go-to guy for, well, everything.

“Bill Comeau does whatever you want him to do,” said Mr. Hunt.

Mr. Ramos, of New Bedford, said that he lied about his age to get into the navy. His Cape Verdean mother did not speak much English, but he convinced her to say that he was 17 so that he could join. He was only 16.

Mr. Ramos said he had five younger brothers and sisters and their father had just died. As the oldest, he felt he needed to take care of them, but he could not find a job that would support them all.

He showed his mother how much money she would have sent to her if he joined the navy.

“That was mu way of supporting the family,” said Mr. Ramos. “With a tear in her eye, she made her ‘x’ and looked at me with that tear in her eye and said, ‘God will bring you home safely.’” 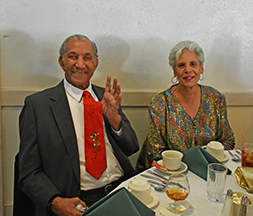 Carlos and Vivian Ramos pose for a picture while Carlos shows off his Rudolph the Red-nosed Reindeer tie. Photo by Beth David.

“I was in the South Pacific fighting the Japanese and came home without a scratch,” said Mr. Ramos, who still cuts a pretty sharp figure of a man, prompting Mr. Hunt to remark that Mr. Ramos could probably still fit in his old uniform. “I’m 91 years old. My mother lives inside of me and I feel it.”

His mother died on Christmas Day in 1975 after greeting a long stream of visitors. Mr. Ramos was sitting on her bed when she died, and it still moves him nearly to tears.

“He still cries about it,” said his wife Vivian.

The chapter also handed out gift cards to all those who attended the dinner, and raffled off several items. DJ Jonny Angel donated his time. John Pires gave the invocation before the meal.