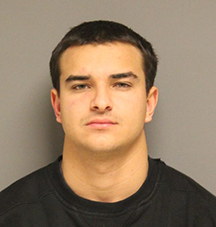 Brandyn Arruda was charged with carry­ing a firearm while intoxicated and other offenses.

Just after 2 a.m. Sunday 11/20, Fairhaven Police were monitoring crowd disbursement at the closing of Rasputin’s Tavern located at the intersection of Bridge Street and Main Street.

Someone informed Officer Jerome Penha that a male party in a grey pickup truck had just bran­dished a handgun at him moments before. Officer Penha quickly located the vehicle traveling on Bridge Street towards Green Street. The vehicle failed to stop for Officer Penha after he activated his emergency lights and siren, and continued south on Green.

The vehicle, a grey 2014 Chevy Silverado being operated by 22-year-old Brandyn Arruda, eventually stopped in the area of Green Street and Spring Street. With backup assistance from Sergeant Daniel Dorgan and Officers Richard Ciccone and Matthew Sobral, Officer Penha ordered Arruda from the vehicle at gunpoint. Also ordered out of the vehicle was a 22-year-old male passenger.

A search of the vehicle and its occupants did not turn up a firearm.  However, while being questioned about the gun, Arruda admitted to police that it had been thrown from the vehicle as it was passing by Cushman Park. The gun was eventually located in the park by officers who found it in close proximity to the entrance to the track. The firearm, which was legally owned by Arruda, was identified as a 9 mm H&K P30SK handgun.

Arruda, who lists a Mill Road address in Fairhaven, was charged with assault with a dangerous weapon, interfering with police, carrying a firearm while intoxicated, disorderly conduct and failing to stop for police. He was arraigned in Third District Court Monday morning. His gun license, which had been issued four months prior, was also sus­pended. No charges have been filed against the passenger at this time.