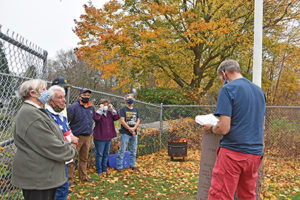 Mike Manley reads from WWII Veteran Manny Sylvia’s military service documents while a small group listens at a ceremony on 11/11/20 to remember Mr. Sylvia and burn his casket flag and service documents at the Charles F. Albaugh Memorial Flagpole at the Main Street/195 overpass in Fairhaven. Photo by Beth David.

In a last and final tribute to WWII veteran Manny Sylvia, a group of veterans and friends gathered together on 11/11/20 to read from his service record and burn his casket flag and service records at the Charles F. Albaugh Memorial Flagpole at the Main Street/195 overpass in Fairhaven.

Mr. Sylvia served in WWII and received the Bronze Star for his service as a Utilities Sergeant on the infamous beach of Normandy in France on June 6, 1944.

His job was to make sure “food and water were brought up from the beach for the personnel who could not leave to care for themselves,” reads the citation.

He improvised for many items that were lost during the landing, which enabled staff sections to operate in a  “much more efficient manner than otherwise would have been possible,” reads the citation.

“By his constant untiring devotion to duty without regard for his personal comfort, Sergeant Sylvia made a marked contribution to the efficient operation of the Corps Headquarter in all operations on the continent. His service is most commendable,” reads the citation. 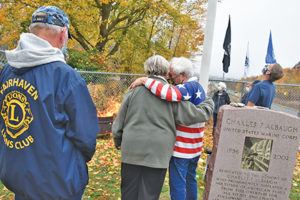 L-R CENTER: Sally and John Medeiros share a moment as they watch the casket flag and mementos of their good friend Manny Sylvia burn after a ceremony of final tribute to the WWII veteran on 11/11/20 at the Charles F. Albaugh Memorial Flagpole at the Main Street/195 overpass in Fairhaven. Photo by Beth David.

Mr. Sylvia was issued a proclama­tion by the Fairhaven Selectboard on January 14, 2001, on his 90th birthday. He was also issued a Certificate of Appreciation from the Fairhaven Lions Club on March 3, 2001.

Mr. Sylvia lived in Fairhaven for many years and served on a variety of committees and boards, including the Finance Committee. He was also a member of civic organizations, including the Fairhaven Improvement Association and the Lions Club. 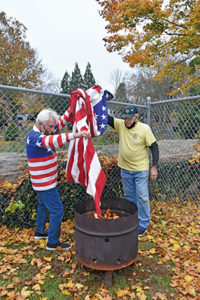 L-R: John Medeiros and Bill Moniz carefully and solemnly place Manny Sylvia’s casket flag into the fire after a ceremony of final tribute to the WWII veteran on 11/11/20 at the Charles F. Albaugh Memorial Flagpole at the Main Street/195 overpass in Fairhaven. Photo by Beth David.

They had no children, and in his final years he had no known living relatives, but he had many close friends who took good care of him in his later years.

Mr. Sylvia, who listed his occupa­tion as “chauffeur” on his enlistment papers, drove bus for Medeiros Bus Company for decades. Owners Sally land John Medeiros, and their daughter Pamela Corcoran all have fond memories of the long time employee.

“He was a good friend,” said Mr. Medeiros at the ceremony, but clearly became too emotional to elaborate.

Jack Daly, a Navy veteran, also attended the event, he said, to “express my respect” for Mr. Sylvia.

Claudette Costa said she went to honor Mr. Sylvia who was a good friend and a member of the Lions Club.

Mike Manley, who read from Mr. Sylvia’s service record and other documents, said he did not know Mr. Sylvia, but wanted to contribute. He said those closest to Mr. Sylvia were probably too emotional to do it.

“It’s such a nice thing to do, especially on Veterans Day,” said Mr. Manley.

“My dad was a World War II veteran,” said Ed Dennehey, a Coast Guard veteran. He said he attended to pay his respects and make sure the Coast Guard was represented. 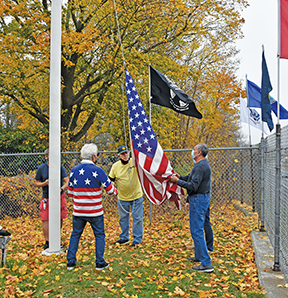 Friends and supporters of Manny Sylvia take down his casket flag, which flew for the last time, after a ceremony of final tribute to the WWII veteran on 11/11/20 at the Charles F. Albaugh Memorial Flagpole at the Main Street/195 overpass in Fairhaven. Photo by Beth David.