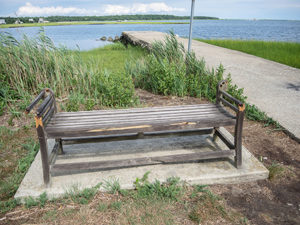 The Matthew Lovegrove memorial bench near the fish pier along the Little Bay extension to the bike path is vandalized, presumably for firewood. Photo by Glenn C. Silva

“I’ve never been there when somebody wasn’t sitting there,” said Darlene Lovegrove, Matthew Lovegrove’s mother, about the memorial bench for him at the little fishing pier off the Little Bay extension to the bike path in Fairhaven.

She said the bench was destroyed last Wednesday, 7/29, and they used the back of it for firewood.

Her son Matthew was only 21 when he was killed in a car crash in 2004. The public works department installed the bench not long after. The driver of the other car paid for it.

She goes to the bench every week. once a month in the winter. 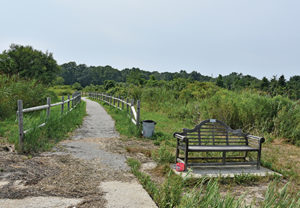 This bench in memory of Matthew Lovegrove, who died in a car accident in 2004 at the age of 21, was recentky vandalized. It has given many people a peaceful place to sit as they enjoy the Little Bay extension of the Phoenix Bike Trail in Fairhaven, and is placed at the fishing pier that is just a few hundred feet off the extenxion. Neighb News file photo by Beth David from 8/17/18.

It’s a quiet, peaceful place, and the bench gives people a place to sit, relax, and look out over the water.

Her hope is that someone will come forward.

“It’s a place that everyone in town knows,” said Ms. Lovegrove.

If you have any information about the damage to the bench, please call the Fairhaven Police Department, 508-997-7421