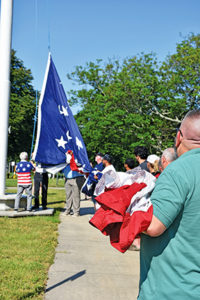 Members of the Fairhaven Lions Club and other volunteers hold the 50×30-foot “Big Flag” as it is being raised in front of Fairhaven High School on 6/6/21 in a belated Memorial Day Ceremony that was also on graduation day. Photo by Beth David.

Last week’s storm caused the Fairhaven Lions Club to ditch their flag-raising and flag-lowering ceremonies, but that did not stop them from honoring the fallen. They just did it a week later.

On Sunday, 6/6, just a couple of hours ahead of the high school graduation, the Lions Club raised the big flag at the high school. Before that, at 8 a.m.,they raised a special flag with a dedica­tion to Angelo F. Puente who passed away on March 12, 2016. Angelo was a WWII army veteran serving with the 24th Coast Artillery Harbor Defense as well as an active member and past president of the Fairhaven Lions. His military flag was raised at the “Highway Memorial” on Main Street and I-195 in a brief ceremony marking Angelo’s commit­ment to his country and many civic organizations in town.

Later on Sunday, at 4 p.m. the Lions retired Mr. Puente’s flag in a formal service and final tribute to him.

At 6 p.m., they Lions returned to the high school, lowered the big flag and replaced it with a new flag in memory of Mr. Puente. Guest speakers included Bill Moniz, current president of the Fairhaven Lions Club, and Bill Kligel, incoming president.

At the raising of the big flag at the high school, Ted Silva said they may have had to change the date, but nothing would stop them from having Memorial Day.

“God Bless America” played as they lowered the flag, and Emma Whynacht sang “The Star Spangled Banner” when the big flag was raised.

The Big Flag was a gift from the Fairhaven Alumni Association, and members of the community paid $25 for a star to pay for it. It is 50×30 feet and makes a spectacular sight in front of Fairhaven High School’s original 1906 Elizabethan-influenced building designed by Charles Brigham. 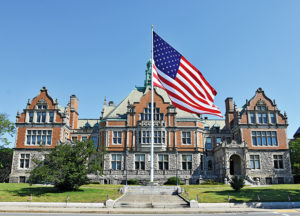 The 50×30-foot “Big Flag” ripples in the breeze after being raised in front of Fairhaven High School on 6/6/21 in a belated Memorial Day Ceremony that was also on graduation day. Photo by Beth David.