This weekend is Memorial Day weekend, and the area is full of events to mark the occasion.

The public is encouraged to attend and to display the American flag along the route. Neighb News file photo by Beth David.

On Monday, 5/30, Fairhaven will hold its annual parade, and flag rais­ing and lowering. (See ad on page 18).

The parade will begin at the corner of South and Main Streets, stepping off at 8:30 a.m. Marchers will travel along Main Street to Riverside Cemetery for a short ceremony, wih a stop at the high school for the raising of the big flag.

Spectators and homeowners are asked to line the route and wave small flags as the parade passes.

Veterans who are not able to walk should meet at the Fairhaven Senior Center at 7:30 a.m. to ride in the COA van. Please call 508-979-4029 so they can get a count of how many riders they need to accommodate. 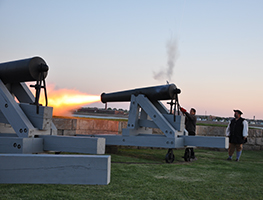 Members of the Fairhaven Village Militia fire off cannon #3 at Fort Phoenix on Saturday, 5/23/15, at dusk. The Militia has several events during the year when they fire off the five 24-pound Seacoast Defense cannons. Neighb News file photo by Beth David.

This weekend the Fairhaven Village Militia will hold its Spring Revolu­tionary War encampment at Fort Phoenix on Saturday and Sunday. The highlight of the weekend is the firing of the fort’s six cannon at dusk on Saturday.

The Revolutionary War era will come to life again in Fairhaven during a two-day historical encampment scheduled for Saturday and Sunday, May 28 and 29, at Fort Phoenix.

Members of the Fairhaven Village Militia and the Fairhaven Office of Tourism will live in an authentic period camp the same way it was done more than 230 years ago. Men, women and children dressed in period clothing will reenact life in 1778 and talk about the history of the fort. They will also be demonstrating campfire cooking, fire starting with flint and steel, musket ball casting, military drilling, loading and firing flintlock muskets and rifles, tin-smithing, leather working, 18th-century dentistry and medicine, cannon firing and more. Visitors may try their hand at tomahawk throwing and children’s games of the period.

The highlight of the weekend will be the firing of the fort’s five large cannons, scheduled for dusk, approximately 7:45 p.m., on Saturday. When fired near sundown, the cannons’ plumes of flames and smoke make a spectacular sight.

The Fairhaven Village Militia began as a small volunteer group in 1999. Made up of members who are interested in local history of the Revolutionary War period, they hold historical encampments in Fairhaven and nearby communities and host educational programs.

The group’s commander, Ellsworth Sylvaria Jr., is a descendant of Bartholomew West, whose home was burned by the British in 1778. Member Wayne Oliveira was originally a member of the Fourth Old Dartmouth Militia group that was started by the late Donald R. Bernard before the nation’s Bicentennial. There are teenage members who have been participating in historical reenact­ments since very early childhood.

“Since we started programs at the fort, thousands of people, including hundreds of school children, cruise ship passengers, visitors and local residents have visited us at Fort Phoenix,” says Tourism Director Christopher Richard. “They find our presentations are both educational and entertaining. The militia has also taken part in events in surrounding communities.

“At the encampment, the group is depicting camp life during the Revolutionary War period. There will be regular demonstrations of military drilling and musket firing, but there will be no large-scale battle re-enactments.”

Both the cannon firing and the overnight encampment will be cancelled in the event of heavy rain. Weather permitting, the militia’s camp will open to the public from 9:00 until sunset on Saturday and from 9:00 a.m. to mid afternoon on Sunday.

For more information, call the Office of Tourism at 508-979-4085 or email fairhaventours@aol.com.

Several events are planned in New Bedford throughout the upcoming Memorial Day weekend to honor the courageous men and women who lost their lives serving our nation.

9:00 AM at Rural Cemetery The Greater New Bedford Civil War Round Table will conduct a memorial exercise at the Union Soldier’s Burial Site at Rural Cemetery, 149 Dart­mouth Street. These services typically include historical reenact­ment, music and a gun salute.

After the service at Rural Cemetery, a service will be conducted at St. Mary’s Cemetery (across from Shaw’s on Rt. 6) with a focus on Medal of Honor Recipient William Downey who served during the Civil War.

8:15 AM at Rural Cemetery New Bedford Post 1, The American Legion will conduct a Memorial Day Exercise at the Veterans’ Plot in Rural Cemetery, 149 Dartmouth Street.

The New Bedford Veteran’s Advisory Board and the New Bedford Office of Veterans Services invites anyone who attends the service in Clasky Park to bring a single flower of their choice to lay at the Soldiers and Sailors Memorial in remembrance of a veteran family member or friend.