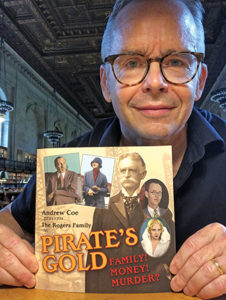 Author Andrew Coe, a direct descendant of Henrry Huttleston Rogers, holds up a copy of his book, “Pirate’s Gold,” being released on 8/10/21, about HHR’s fortune and the Rogers family scandals. Photo submitted.

Heavily illustrated, “Pirate’s Gold” unreels like one of those old pre-Code Hollywood movies. The Rogers family fortune was amassed by its patriarch, one of the great Gilded Age Robber Barons. Henry Huttleston “Hell-Hound” Rogers helped found Standard Oil and gained renown as a notorious Wall Street “pirate.” His early life in Fairhaven and generosity to its townspeople are amply docu­mented in the book.

In 1909, his children inherited $49,000,000 (billions in today’s dollars). “Pirate’s Gold” looks beneath the tabloid headlines to uncover the lives of his son, Colonel H. H. Rogers Jr., and grandchildren Millicent and Harry. Their struggles over money, love, and control left a trail of heartbreak and tragedy in their wake.

Millicent’s troubled marriage to Count Ludwig Salm was one of the top news stories of the 1920s. In 1935, her brother Harry was implicated in the notorious shooting of a Broadway star. Perhaps, suggests the book, being born into wealth isn’t all it’s cracked up to be.

Andrew Coe is a writer and author of award-winning books on food history and articles in The New York Times, The Wall Street Journal, Saveur, Gastronomica, and other publications. He is also a direct descendant of Henry Huttleston Rogers.

“Pirate’s Gold” will be published on August 10 by Four Winds Press. It will be sold at area bookstores and all online outlets. The 362 page, heavily illustrated book is $24.95. Visit https://www.fourwindspress.com/ pirates-gold for a sneak peek. 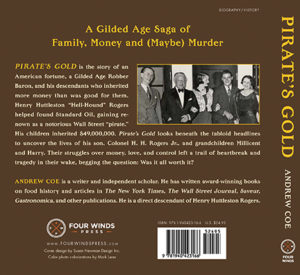 The back cover of “Pirate’s Gold: A Gilded Age Saga of Family, Money and (Maybe) Murder,” which will be released on 8/10/21, explains that it is the story of the heirs of Henry Huttleston Rogers, Fairhaven’s famous son and benefactor.