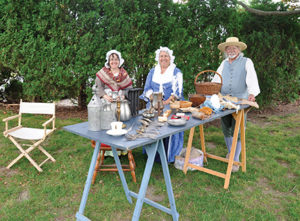 L-R: Lori Richard, Debra Almeida, and Fairhaven Director of Tourism Christopher Richard hang out by the general goods table during Early American Monday on 6/21/21, a new program that will take place in front of the Fairhaven Visitors Center this summer. Photo by Beth David.

Did you know that block sugar really came in a huge block? Do you have any idea how early Americans tried to inoculate against smallpox and other disease? How about a demonstration on spinning yarn ?

The Fairhaven Office of Tourism will offer these and many more demonstrations during Early American Monday this summer. Held at the visitors center from 12:30–3:30 p.m. through August 29, the weekly program will feature different stations on the lawn with reenactors from the late Colonial and early Federal period demonstrating and talking about public life during the late 1700s.

Volunteers will demonstrate a variety of American skills, including wool carding and spinning, quilting, 18th century medical and dental instruments and procedures.

It is likely that no two weeks will be the same, with a variety of reenactors  rotating in and out as the weeks go by, so plan on going by often.

On opening day 6/21, Ann Eldridge (aka Debra Almeida) displayed some samples from the general goods store she owns with her husband Elnathan. 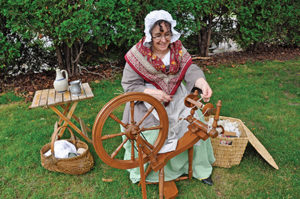 Lori Richard strings the spinning wheel to demonstrate yarn spinning at Early American Monday on 6/21/21, a new program that will take place in front of the Fairhaven Visitors Center this summer. Photo by Beth David.

Mr. and Mrs. Eldridge owned the store at the end of Oxford Street where there was a wharf that they used to accept imported goods.

Mrs. Eldridge had on display some musket balls, gun powder, a huge block of sugar, and many other items.

“All kinds of things you would find in a store,” said Mrs. Eldridge.

She recited her history, coming from Nantucket and settling in Fairhaven with Elnathan in 1762. They had 12 children plus his two from a previous marriage.

She also had on display some local corn for planting.

“A farmer brought it to the store and wanted to trade it for some herbs I grew,” said Mrs. Eldridge, and she sold some to customers who wanted to plant some corn. 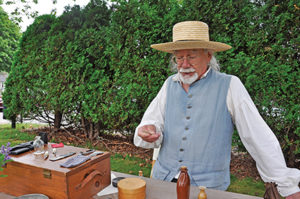 During Early American Monday on 6/21/21, Christopher Richard displays a device used for scraping smallpox bumps to get the fluid on the scraper, let it dry, then use it to infect another person in the hopes that the person would get only a mild case, but then be inoculated, a method used before modern vaccines were developed. Photo by Beth David.

Fairhaven Office of Tourism Director Christopher Richard demon­strated a medical procedure that seems appropriate after our recent experience with COVID 19.

He held a small “ivory point” that they used to take some pus from a smallpox patient. They would scrape it off, let it dry, and then put it on another person. The idea was that the other person would get a mild case, but, “They could die,” admitted Mr. Richard.

But, usually, they got  mild case.

Lori Richard said she has not used the spinning wheel for a long time, but decided to pull it out of the attic for the new program. The wheel spins yarn or thread from fibers. 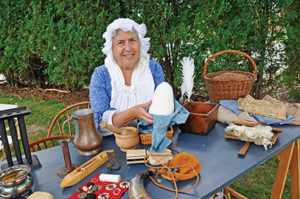 Debra Almeida, as Ann Eldridge, proprietor of a general goods store with her husband Elnathan, holds up a block of sugar, which is how it was imported in early America, during Early American Monday on 6/21/21, a new program that will take place in front of the Fairhaven Visitors Center this summer. Photo by Beth David.

To learn more about Early American Monday and other programs, visit www.fairhaventours.com