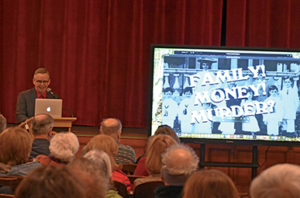 Author and direct descendant of Henry Huttleston Rogers, Andrew Coe, talks about his book, “Pirate’s Gold,” highlighting the various family scandals of the HHR heirs, at a presentation at Fairhaven town hall on 11/15/21, sponsored by the Friends of the Millicent Library. Photo by Beth David.

Imagine looking at some old news­paper articles on microfiche, yes, that old, and you see a familiar name implicated in a murder, a family name, a murder eventually ruled a suicide, exonerating your relative in 1935.

Naturally, that would make you dig deeper, leading you to find that your rich family, the heirs of Fairhaven’s beloved benefactor Henry Huttleston Rogers, were in the headlines for all manner of scandals in the 1920s and 1930s.

That’s what happened to Andrew Coe, a Rogers descendant who seems to have had great fun gathering up the family scandals into a book that lays out and reads like a silent film with subtitles.

HHR could go from “charming to ruthless,” said Mr. Coe at a reading to a packed house in the Fairhaven Town Hall auditorium, a Rogers building of course, on 11/15/21, that was sponsored by the Friends of the Millicent Library.

In his talk, Mr. Coe follows the career of HHR, including his friend­ship with Mark Twain and HHR’s altruism to his home town of Fairhaven, Helen Keller, Booker T. Washington, and more. 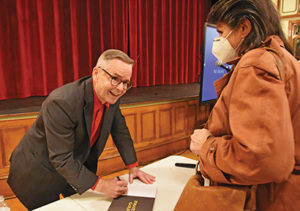 Author and direct descendant of Henry Huttleston Rogers, Andrew Coe, signs a copy of his book, “Pirate’s Gold,” for Barbara Acksen after a presentation at Fairhaven town hall on 11/15/21, sponsored by the Friends of the Millicent Library. Photo by Beth David.

But, by far, the most entertaining points revolve around the Rogers grandchildren, including Millicent (no, not our Millicent) and her rocky marriage to Austrian Nobleman Count Ludwig Salm Von Hoogstraeten. Their divorce and custody battle were great fodder for the tabloids for years.

And then there was Henry Huttleston Rogers III, aka “Harry,” who was held in the death of one Evelyn Hoey. Harry beat the rap when the Ms. Hoey’s death was ruled a suicide in 1935.

Harry was the son of Colonel Henry H. Rogers, our town benefactor’s son.

Colonel HHR, the only son of our town benefactor, “grew up to embody wealth and entitlement,” said Mr. Coe.

Young Harry an “awkward boy,” dabbled in various jobs, including a short and unsuc­cess­ful career as a film maker.

He got himself disowned and deprived of the family fortune for saying, at one of his father’s weddings: “For God’s sake, can you stop hanging a marriage license on every woman you screw?”

“Money was the wind beneath the Rogers family’s wings,” said Mr. Coe, but said HHR had “no interest in high society,” unlike his children and grandchildren.

HHR was a “brilliant businessman,” said Mr. Coe. “But he was also a very interesting human being.”

He was a great philanthropist, as evidenced by his architectural gifts to Fairhaven, and was a “much more rounded person,” than the other “Robber Barons” in the oil and railroad industries.

Carolyn Tyler said she was glad she attended the talk by Mr. Coe. She said she appreciated his presentation and he seemed “straight-forward.”

Bob Pina said he attended the presentation to learn about HHR.

“I didn’t know a lot about him,” he said, and definitely learned more.

After the presentation, Mr. Coe said he was doing research on a project when he saw the headling about HHR III (Harry) and the murder charge.

“That’s my family,” he realized, and asked his father about it.

Mr. Coe’s father would’ve been around six years old, he said, and never heard a word about it. The family managed to keep the story from reaching the children, and even afterwards.

“He never heard a word about this,” said Mr. Coe.

Millicent’s trials and tribulations, however, were well known.

The book is published by Four Winds Press, www.fourwindspress. com, and is available online, including at Amazon and Bookshop. org. Paperback: $24.95.