The Fairhaven Selectboard closed its hearing on Rasputin’s Tavern at its meeting on Monday, 6/3, setting a probationary period to September 9. The vote was 2-1, with Selectboard chairper­son Charles K. Murphy, Sr., voting “no” because, he explained in a follow-up phone interview, that he wanted to keep the hearing open.

The final vote keeps in place the added security measures required from the last hearing date; imposed an eight-day suspension of license that was stayed until 9/9/19, subject to no additional violations occurring; and imposes a one-hour suspension of the license to be imposed in one-hour intervals each day from 1-2 a.m. Essentially, that means the bar now closes at 1 a.m., instead of 2 a.m., from now until September 9. If no more violations occur, then the bar will be allowed to go back to its 2 a.m. closing time.

Mr. Murphy’s suggestion was actually harsher, he said than what was voted on, but his objection was closing the public hearing.

In September, if all goes well from now until then, the bar will probably ask for the additional security measures to be lifted, since they are costly to implement.

To see a video of the meeting, visit https://www.fairhaventv.com/boardofselectmen 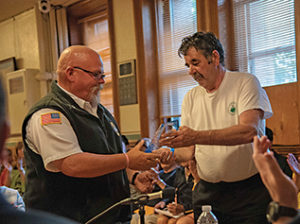 Fairhaven Harbormaster/Shellfish Warden Timothy Cox (LEFT) receives the Shellfish Constable of the Year Award from Paul Bangnall (RIGHT), Shellfish Constable from Edgartown and President of the board of director at the Mass. Shelfish Officers Association, at the Fairhaven Selectboard meeting on Monday, 6/3/19. Photo by Glenn C. Silva.

Also during the meeting, Fairhaven Harbormaster Timothy Cox received the Shellfish Constable of the Year award from the Mass. Shellfish Officers Association.

Mr. Cox was cited for his “outstanding work ethic” and his dedication to shellfisheries in Fairhaven. He was instrumental in creating a new public safety marina at Union Wharf, built an upweller to grown quahogs from seed, and made an oyster reef in Little Bay.

“Mr. Cox is well respected among his peers in the community for this work as Harbormaster as well as his many volunteer efforts,” said the association in a press release.

The association has given the award for more than 20 years to shellfish constables who show “great initiative and hard work for their local shellfisheries.”