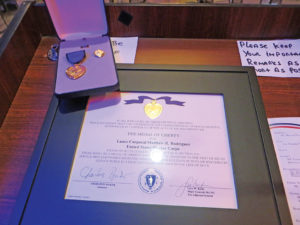 The Massachusetts Medal of Liberty awarded to the family of Lance Corporal Matthew R. Rodriguez of Fairhaven at the Thanks To Yanks annual Tribute Dinner on 9/11/19. LCPL Rodriguez was killed in Afghanistan on 12/11/13.

The family of Fairhaven’s Matthew R. Rodriguez was awarded the Massa­chu­setts Medal of Liberty in his honor at a ceremony on September 11. Marine Lance Corporal Rodriguez was killed in action in Helmond Province in Afghanistan on 12/11/13.

The organization “Thanks To Yanks” holds a tribute dinner every year as a way to say “thank you” to veterans, military members, first responders and their families.

In addition to the Medal of Liberty, the organization also granted a lifetime achievement award to Dennis Moschella, a Vietnam Veteran and President of Veterans Assisting Veterans. Fairhaven Veterans Agent Brad Fish attended the dinner and said he was surprised at how many people showed up. The function room at the Double Tree Hilton in Milford was filled to capacity, with more than 400 people attending. 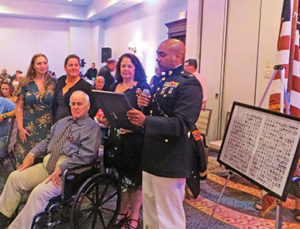 “I was in awe when I got there,” said Mr. Fish, adding he had thought it was going to be a small ceremony. “I was totally amazed.”

Several of Matthew’s family mem­bers were there, including his former fiance, his parents and his sister.

Matthew’s mother Lisa Rodriguez spoke at the event. She said she likes events that honor her son, but they are hard, too. When she sits down to write a speech, she said, she needs to have a box of tissues handy, and she has to lock herself in to do it.

“I do enjoy it, too, because it makes think of him and a lot of memories of him,” said Ms. Rodriguez in a phone interview. “I enjoy doing it, and I get to allow myself to just wallow in Matthew.”

In her remarks, which she shared with the Neighb News, Ms. Rod­riguez told the crowd that Matthew, who has been dubbed “The Smiling Warrior,” had a smile that would not stop, “even when it should.”

She said his smile got him in trouble, including the “pit” in boot camp.

“I’ve got nearly 20 years of head-shaking Matt stories that could keep you laughing for hours,” she said, then promised not to go on so long.

He had dreams for the future she said, including road trips, college, getting married and having children.

“When you lose a child, you don’t just grieve for them and the hole that has been left in your heart; you grieve for the life they did not get to have, the experiences that will never be theirs, and the loss to those that they loved as well,” said Mr. Rodriguez, and adding that Matthew wanted “nothing more than to be a Marine” and to be deployed, “and forward deployed at that.” 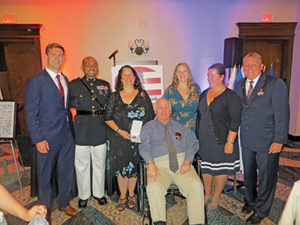 “He had to be ‘the tip of the spear’ as those combat engineers like to say,” she said. “I do take comfort in knowing that Matthew gave his life doing exactly what he wanted to be doing. I also know he was well aware of the price his service could extract.”

She said although he was young, he was wise beyond his years, and he chose to serve, not by “happen­stance, but with deep thought and understanding, a love of country, and a profound pride and purpose.”

She also told the crowd that the Marines have not forgotten Matt’s family, and she feels “blessed” that they have been remembered. Several of them keep in touch in various ways and have visited the family.

People are often afraid to mention a person who has died, said Ms. Rodriguez, mistakenly believing that it reminds family members of them.

“Trust me, you never forget, not for a minute,” she said. “It is a joy to talk about your lost loved one, even if it’s through tears. Tears mean they are loved, I never intend to stop shedding a tear.”

She also said people should share any pictures or stories with the families of friends who are gone.

“There is nothing they would love more than to be able to add to their memories and know that others think of them also,” she said. “The thing most gold star families want is that their hero not be forgotten.”

The family has created a memorial foundation in Matthew’s name, they hold a road race (coming up 11/3/19), and blood drives throughout the year. They also work with the elementary schools to create holiday cards for veterans at the VA hospital. A playground at New Bedford Municipal Airport was built in his memory and is named after him. 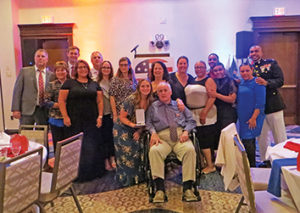 Friends and family members pose with the Medal of Liberty the family received at the Thanks to Yanks Tribute Dinner on 9/11/19 in honor of Lance Corporal Matthew R. Rodriguez who was killed in Afghanistan on 12/11/13. Photo courtesy of Brad Fish.