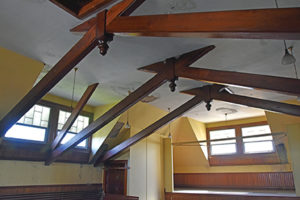 Grand old wooden beams with acorn shaped accents are juxtaposed with damaged ceilings and peeling plaster in the auditorium in the old portion of the Rogers School in Fairhaven during a tour on Thursday, 9/30/21. Photo by Beth David.

Members of Fairhaven’s Rogers School Re-Use Committee conducted tours of the old school last week to highlight the building’s strengths and character. More than 300 people toured the building, according to a Face­book post by committee chair­person Susan Loo.

She said the majority left in “awe of not only the building’s beauty but the overall good condition the building is in contrary to what they have been hearing.”

The building has been mostly emptied out, and cleaned up, and is being “mothballed” to save it from further deterioration. The committee is pushing to have it rented by SMEC, to be used for classrooms again. That prospect is in the mix of possibilities. The Select­board is leaning towards issuing another Request for Pro­posals that would include leasing the building for classes.

A couple of past proposals in­cluded knocking down the 1950s annex and build­ing single family homes or apart­ments using the old building and new construc­tion.

The school was the first gift of town benefactor Henry Huttleston Rogers, and was built in 1885. It was used as an elementary school for 128 years, until 2013.

On Thursday, Doug Brady led a tour through the gym in the addition, through classrooms, into the old building, including the auditorium, the caretaker’s quarters, the boiler room, and the basement bathrooms, with boys and girls quite separated.

Robert “Hoppy” Hobson made it known that his preference was to create housing for veterans in the old space. 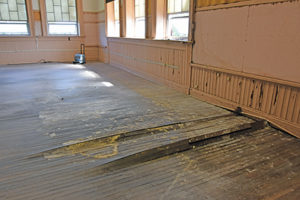 A classroom in the old portion of the Rogers School in Fairhaven shows a buckled floor and other water damage during a tour on Thursday, 9/30/21. Photo by Beth David.

Joni Souza said she joined the tour because she lives in the neighbor­hood and was curious about the building.

He pointed out the “infamous” room that was shown at Town Meeting to possibly have mold. The ceiling has since been taken down. He noted that the only asbestos is in the tile floors in only part of the 1950s addition.

“The whole point is to dispel rumors,” said Mr. Brady. “And let people see for themselves.”

The committee is determined to see the site used as a school again. He pointed out that in the attic, it is not easy to create an apartment because the beams are low and support the whole roof.

“I’ve gotta say, it’s a cool place,” said Mr. Hobson. “If they can spend two million dollars on a football field, they can spend a few million here.”

Cathy Melan­son, who volun­teered at the door that day, said a local con­tractor told her that the building was salvageable. He told her he believed the 1950s addition could sustain a second floor. She would not name the contractor.

The building clearly has some leaks, especially in the addition. None of it is insurmountable, contend the commit­tee members.

One has to wonder, however: What would HHR do? He was, after all, a man who spent lots of money building new, and tearing down the old to do it.

A classroom in the old portion of the Rogers School in Fairhaven shows a buckled floor and other water damage during a tour on Thursday, 9/30/21. Photo by Beth David.

To learn more about the building, visit https://fairhaventours.com/rogers-school-fairhaven-ma/

To learn more about HHR and his gifts to the town, visit https://fairhaventours.com/henry-h-rogers/

Find us on Facebook, https://www.facebook.com/NeighbNews, for more photos of the school.