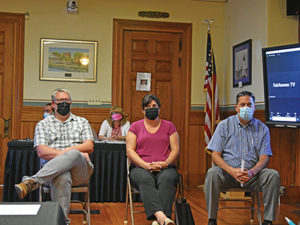 The three candidates who vied for the open seat on the Fairhaven School Commitee return to the room for the vote, L-R: Erik Andersen, who was chosen by a vote of the Select Board and School Committee; Cathleen Marchessault; Robert Pimental. Photo by Beth David.

The Fairhaven Select Board and School Committee interviewed three candidates to fill an opening on the SC on Monday, 8/30/21. The opening was created when former SC member Stasia Powers won a seat on the Select Board in a special election on 7/26.

Erik Andersen, a Licensed Mental Health Clinician with two children in the Fairhaven Public Schools system, was chosen in a 6-2 vote. All five SC members and Ms. Powers voted for Mr. Andersen.

Both SB members, Bob Espindola and Keith Silvia, voted for Cathleen Marchessault, who had run for a seat on the SC in the last election.

The third candidate was Robert Pimental, a 1984 graduate of Fairhaven High School, and an educator at Greater New Bedford Voc-Tech for 30 years.

Each member of the SB and SC asked the same question to each candidate.

When asked why he wanted to be on the board, Mr. Andersen, a Fairhaven resident since 2008, said he felt he could bring a “unique perspective” to the committee.

He said his background working with kids gave him an understanding of the social-emotional needs of students. He also said that both his children on special education plans.

“I’m a listener. I’m the one that hears,” said Mr. Andersen, adding that his job requires that he listen.

He also said he was more of an introvert and would look around to find his role on the committee. 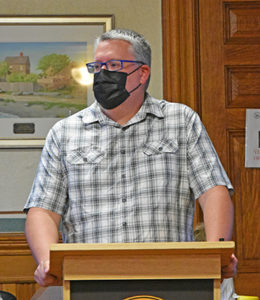 Erik Andersen listens to a question during his interview to fill an empty seat on the Fairhaven School Committee on 8/30/21, when he was chosen in a 6-2 vote of the Select Board and School Committee during a combined meeting. Photo by Beth David.

“I’m not rambunctious,” he said.

He also said that COVID was the biggest challenge facing the district and he would have voted to support the mask mandate that the SC passed.

“I work in the hospital. To me, that’s the answer right there,” he said about supporting mask wearing. “And I see what the pandemic is doing.”

He said he had not been able to be on a committee before due to his work schedule, which has changed.

Ms. Marchessault revived many of her campaign points, stressing that she is a “passionate educator” who wants to give back to the community she lives in.

Mr. Pimental stressed that he is a lifetime resident of Fairhaven, FHS graduate from a long line of FHS graduates, and has been an educator for 30 years. He also coached JV basketball at FHS for nine years as assistant coach to former Superin­tendent Bob Baldwin.

Mr. Espindola and Mr. Silvia both said they supported Ms. Marches­sault because she received so many votes when she ran last April.

Mr. Andersen said he would get sworn in right away so he could attend the next SC meeting on 9/8.

“I’ll be in touch,” said SC chairperson Brian Monroe to Mr. Andersen. “You’re not alone on this.”

He said the Mass. Association of School Committees has an orienta­tion course that will be very helpful to the new member.

Mr. Andersen thanked Mr. Monroe and said it was “humbling.”

In other business, the Select Board  discussed the recently reinstated mask mandate for town buildings. Interim Town Adminis­trator Wendy Graves said that two town hall employees tested postitive for COVID, so the mask mandate that was imposed the week before “came at just the right time.”

Mr. Espindola noted that people are no longer working remotely, but employees who test positive will not be in the building.

Ms. Graves said that employees will wear masks if they interact with the public or need to walk in the halls. For those at their desks who are able to socially distance, they do not have to wear glass; neither do those who have plexiglass between them.

Mr. Espindola said the agenda item will continue to be on the agenda as the situation is “fluid.”

In another matter, the board approved the Town Administrator position statement. Board member Keith Silvia recused himself and left the room as he has a conflict of interest, because his wife is the Council on Aging Director and is directly supervised by the TA.

The statement will be used by the Collins Center to recruit a Town Administrator. It describes the kind of community Fairhaven is; town government; finances and financial outlook; budget, bond rating, taxes and revenue; economy, industries, and economic development potential; open space and recreation; challenges and opportunities; current and potential projects.

Except for a few minor typographical errors, the board voted to accept the statement.

Mr. Espindola pointed out that the Collins Center hoped to start advertising for the position before Labor Day.

Ms. Powers also told the board that she attended the Bristol County Advisory Board meeting last week. She said communities in Bristol County are slated to receive $109 million in COVID relief funds. Fairhaven is set to receive $3.1 million. The BCAB will take a percentage from each municipality’s grant for county-wide projects.

Ms. Powers said she was waiting for more information on the criteria for what kind of projects the money can be spent on.