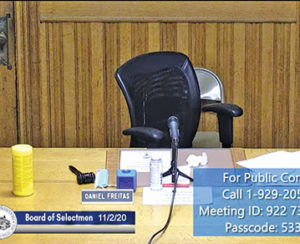 Selectboard chairperson Daniel Freitas’s chair is empty after he abruptly leaves the meeting on 11/2/20 with no explanation. Screenshot photo from FairhavenTV..com

Fairhaven Selectboard Chairper­son Daniel Freitas let out a loud exhale as he stood up from the conference table during the 11/2 Selectboard meeting.

“I gotta leave,” he said, picking up his bag and grabbing his coat from the back of his chair. “I’m sorry,” he said and then breathed out another tight, audible lungful of air as he exited the nearest door.

Selectboard member Keith Silvia had not even stated what his motion was going to be before Mr. Freitas decided he’d had enough of the discussion about the Town Adminis­trator recruitment position statement — a discussion that turned contentious right from the start when Mr. Freitas wanted to table it until the next meeting as board member Bob Espindola pressed to resolve the time-sensitive action that night.

At the start of the discus­sion, Senior Associate Sharon Flaherty from Community Paradigm Associates said she was able to incorporate the feedback and comments that Mr. Espindola and Town Administrator Mark Rees had provided her earlier in the day. She was able to provide the board just ahead of the meeting with another draft of the write-up that includes a comprehen­sive overview of Fairhaven: its history, current economic status, political structure, demographics, and other pertinent information, along with compensation and benefits information and the qualifi­ca­tions and characteristics the Town seeks in a new town administrator. Aside from some minor additions, the statement was ready to be finalized, and Ms. Flaherty, standing in for principal consultant Bernie Lynch until his remote arrival, listened for any further final comments on a salary range.

“I’m OK with your recommenda­tions,” said Mr. Espindola. “You’ve done more of these lately than any other agency and, obviously, you know the market.

“It would be nice if the board would comment on that as well,” he said.

Getting no response, he continued, “I don’t know, it seems like an important factor.”

Besides the tapping of Mr. Freitas’s pen on the table, there was silence from the two Selectboard members.

After a moment, Ms. Flaherty offered: “Does the board want to take a vote on that or a vote on the position statement as a whole as amended with the recommenda­tions—um?”

Mr. Freitas said he had only received a copy two hours prior to the meeting and then the final copy “three minutes ago” when Mr. Rees handed it to him. “I’d like to at least have read what’s in the paper, so that’s why I’m remaining silent right now because I don’t want to stick my foot in somewhere and say I’m gonna vote for this and it’s not in the paper…”

“Since this is such an important thing, and it’s only a couple pages, I would recommend that we just read through it right now and then see if there’s any comment we want to make,” Mr. Espindola suggested. “If you’d like, I’ll read it, Mr. Chairman.”

“Is that OK?” Mr. Espindola asked him.

“Well, I know, but if we take the time…. We all talked about the time sensitivity of this process,” said Mr. Espindola. “So, if we’re near and we don’t have too much else on our agenda, I think this is the last thing—”

“Bob,” interrupted Mr. Freitas, “this is going to go back to Dan Freitas saying, a thousand times, please don’t hand us anything at the meeting where we have to discuss it and waste people’s time because this was handed to us. This I read— slightly went through … when I got this today. I just got this, so If you want to read it, Bob, you can.

As he spoke, he punctuated many words with a bang of the table.

“I have said in the past, I don’t like getting something and then automatically having something to say after,” said Mr. Freitas. He suggested perhaps another meeting in a couple days to vote on the final statement.

“The majority of this was presented to us by the consultant [already],” said Mr. Espindola. “Again, my Open Meeting Law concerns always are I don’t want to present my proposal for changes directly to the other board members; I want to do it during an open public meeting.”

Mr. Espindola argued that he should read it, that the community would find it interesting, and so he started to read it.

Mr. Freitas rubbed at his eyes and 10 seconds into it, got up and left the room. Mr. Espindola continued unin­ter­rupted while Mr. Silvia sat reading along silently. A minute later Mr. Freitas returned. He spent the next several minutes noisily shuffling papers, rearranging the items on the desk before him, and flipping through a nearby binder. Occasionally he sat motionless with the exception of his fingers tapping the wrist of his opposite arm as Mr. Espindola read for some time.

When he finished, Mr. Espindola pointed out that the segments of the document outlined in red to reflect changes were “probably about 3% of the text, maybe 5%.

“It’s very limited, what was changed from when we initially received it,” said Mr. Espindola. “Hopefully that gave you some time to read and understand it and see if you have any additional comments tonight and we can move forward.”

“Bob,” said Mr. Freitas, “we’re going to be hiring someone for a position that we get a paper sent to us at around four, five o’clock in the afternoon when our packages were given to us on Friday. Then we sit here, and we’re given another piece of paper with more stuff added to it….

“I’ve said it a hundred times,” continued Mr. Freitas. “I know you’re playing your little game or whatever you want to do, and you’re gonna continue doing it, Bob, but that I do not find fair to us because, at that point, we have to stop and do this. I’m not gonna listen to what you have to say on the thing because I think it’s wrong when you do this.”

The diatribe continued: “I don’t appreciate getting handed stuff at the meeting,” said Mr. Freitas. “I’m a pretty smart guy and I can figure out what’s going on.”

Espindola said he submitted his comments ahead of the meeting “so that we could have a productive conversation tonight — and the red lines tell you clearly what the difference is in the document. It’s not that difficult.”

Mr. Freitas leaned in toward Mr. Espindola and asked, “Are you working now? Do you work now? Are you retired, is that why you — Because I have a job and I try to get things done, and I try to come prepared for these things, and that’s all I’ve asked for, [that] we don’t hand papers….”

Mr. Espindola stated that yes, he is now retired, but that his last day of work was Friday,

“So that’s irrelevant,” he told Mr. Freitas, who gave his eyes a rigorous rub across with his hands.

Pressing Mr. Freitas to take action that night, Mr. Espindola asked if the board could move forward with the matter, and then added, “If we can’t, if you don’t feel comfortable, we can postpone it to another meeting.

“I said that I didn’t feel comfort­able, a million times!” said Mr. Freitas. “Maybe I think different than you, Bob. Maybe I want to understand what’s being said and not thrown down my throat, but that’s you.”

Mr. Espindola turned his attention away from Mr. Freitas and toward Ms. Flaherty and asked her to confirm one of the edits he suggested earlier.

“There’s really nothing in here to be concerned with, in my opinion, and we could move forward,” said Mr. Espindola. “But if your interest and Selectman Silvia’s interest is to delay it until the next meeting, then let’s do that. But I’m in favor of moving forward.”

Participating in the debate for the first time, Mr. Silvia said he still wanted to look into the salary amount.

“What the salary is, what all the other town administrators [are getting] … and where we stand – Are we high, are we low, are we middle?” asked Mr. Silvia.

With Ms. Flaherty still remotely in attendance, and Mr. Lynch now remotely present as well, Mr. Espindola pointed to the “experts in that field” on the Zoom monitor and suggested asking them.

But Mr. Silvia said he figured he could call Ms. Flaherty later and discuss that with her.

Mr. Espindola took the liberty and asked her, “Has this salary been based on representative salaries from similar positions, similar community size Sharon?”

“It has been,” she said. “I think Bernie may want to weigh in on this aspect as well.”

Mr. Lynch apologized for his delayed arrival and confirmed that the $155,000 amount is based on similar factors. He said the words “plus or minus” flanking the figure in the position statement give the board flexibility to adjust compensation according to the candidate’s experi­ence and qualifications.

“Does that answer your question?” Mr. Espindola asked Mr. Silvia.

Mr. Silvia responded with a slight head tilt to each side, but no verbal response.

“It’s the will of the board,” said Mr. Espindola. “If you’re ready to move forward — I feel like I am — if you feel like you need to wait for another meeting that’s [OK].”

Mr. Silvia asked Mr. Freitas if a special meeting would be agreeable.

“Its an important decision,” said Mr. Espindola. “If you feel like you need more time, then, by all means, we just…”

“I make a motion that we, uh … I don’t know if it’s acceptable for…” Mr. Silvia made it that far when Mr. Freitas rose from his chair, apologized, and vamoosed.

“Well, I guess, uh… as the vice chair, I’ll resume with the rest of the meeting,” said Mr. Espindola.

At that, Mr. Silvia motioned to table the matter until a meeting could be scheduled later in the week for Mr. Freitas to participate. The meeting will likely be Thursday or Friday.

The discussion to appoint members to the town administrator search committee also had to be tabled for the next meeting because Mr. Freitas, who had expressed his desire for a Selectboard member to be appointed and wished to discuss it that evening, had already left.