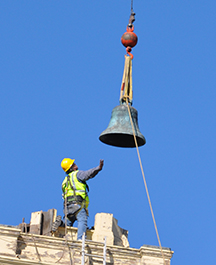 Members of the Fairhaven Bell Committee presented a plan at the Selectboard meeting on Monday to display the famous Paul Revere Bell at events around town, and to create a website for the purpose of informing people about the history of the bell and to announce upcoming events where the bell will be displayed.

Nils Isaksen and John Medeiros told the board that many people have been asking about the bell and the progress the committee has made on finding a permanent display location for it.

The bell was removed from the roof of Oxford School in October of 2015. The bell was made by American patriot Paul Revere in 1795 for a church in the center of Fairhaven. Around 1914, the school department bought the bell and placed it on the school where it signalled the begin­ning and end of school. It also rang for fire alarms.

The Bell Committee received per­mis­sion for two requests: To create a website for information about the bell; and to transport the bell for display at various events.

The committee anticipates taking the bell to the Memorial Day Parade, July Fourth Parade, Homecoming, and other evens where people will be able to view it and learn about its history.

The committee is working with students at New Bedford Voc-Tech to build a cradle for the bell that will then be easily moved on and off a trailer for transport and display.

“The purpose of this ‘tour of the bell’ is to get the bell ouf into public view, raise awareness of its current condition and need for preservation of our Town’s history treasure and artifact,” wrote the Bell Committee in a letter to the Selectboard.

The committee hopes that when people see the current condition of the bell, they will donate to have it restored. The committee will also see Community Preservation Act funds to restore the bell once a final display location is found.

“Our goal is to have the original clapper that was with the bell restored first,” the committee said in its letter. “And then the metal analyzed for possible multiple layers of coatings, level of corrosion and then cleaned in the proper solultion. Once cleaned the green patina will be applied.”

The committee will not display the bell without first notifying the Selectboard and town administrator of the plans, Mr. Isaksen told the board.

He also told the board that the committee wanted the website to “stop misinformation.”

He said if there is an official place for information, people can see for th themselves what is happening with the bell. A volunteer has offered to create the website at no charge.

The website will have a section with photos of people with both the Revere Bell and the bell taken from the Rogers School; a section on the histories of both bells; a comments section; an upcoming events section; and a “What’s Happening Now” section to let people know of the current works and status of the bell, plans for cleaning, funding, location of a permanent site, how it will be displayed, and the next meeting date.

“There has been quite a lot of interest generated in the Revere Bell by the Town residents and other Committees that just want to know what is happening,” said Bell Committee Chairperson Doug Brady in a letter to the Selectboard. “This website will help to provide answers to these questions and also prevent any misinformation from being circulated.”

After discussing the various nuts and bolts of the town’s social media policy, such as who will have access to the site, etc., the board approved the request.

In another matter, the board voted to change the location of the primary posting place for meetings. The town’s website will now be the official posting location, and the town hall will be the alternate location. Meeting notices will still be posted at the main entrance to town hall on Center Street and near the wheelchair entrance.

The annual report needs to be printed in time for the annual Town Meeting in May.

Deadline for submissions is Thursday, 2/2, by 4 p.m. Contact Anne O’Brien at aobrien@fairhaven-ma.gov for details.

The board also appointed Nicholas Carigg to the Conservation Commis­sion. Mr. Carrigg has a background in biology and said he was looking for a way to get involved in the community.