On Monday, 6/,5 the Fairhaven Selectboard acknowledged the appointment of Kevin Swain to Police Sergeant. The town administrator, with input from the police chief, makes the appointment. Fairhaven Chief of Police Michael Myers spoke very highly of Mr. Swain and his dedicated work to the town.

Mr. Myers said that Mr. Swain has been working as temporary sergeant and has been doing a tremendous job, and that he is highly respected in the police department and in town.

Selectboard member Daniel Freitas explained that a lot of people would not have stepped up to take on more responsibilities like Mr. Swain has done, and that he has done a great job.

Selectboard member Charles Murphy said that he has known Mr. Swain for a long time and he has been a great member of the Fairhaven community. 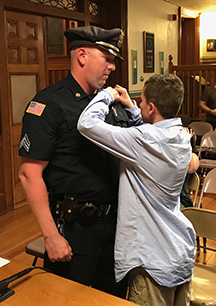 Sgt. Kevin Swain of the Fairhaven Police Department receives his sergeant pin from his son Cohen at the Selectboard meeting on June 5, 2017. Photo courtesy of Charles Murphy, Sr.

With many kind words and respect for Mr. Swain, the Selectboard let Mr. Swain’s son Cohen pin the new badge onto his father.

In another matter, the Selectboard met with Dave Dickerson and Dave Lederer about the Environmental Protection Agency (EPA) and National Oceanic and Atmospheric Administra­tion’s (NOAA) request to use town property to access Marsh Island for cleanup and restoration.

He said they could access Marsh Island by water, but they are weighing the cost differences. Building an access road would probably raise the cost because they already have the equipment to access by water.

Mr. Dickerson told the board that after the cleanup is finished, everything will be restored to the way it was before. He said the equipment they would be using is standard equipment such as backhoes, bulldozers, and excavators etc.

Mr. Dickerson also explained that they take precautions to make sure there is no leaking of the PCBs, which will be taken to a PCB landfill.

Mr. Freitas asked about how many trucks there would be and around what times of day.

Mr. Dickerson said there would be around 200 trucks and it would be during normal business hours.

Mr. Freitas also asked if they had any complaints about the cleanup project they did in New Bedford.

Mr. Dickerson said that they did not have any complaints other than one student in New Bedford that was concerned they would not restore the area after the cleanup.

Mr. Murphy told Mr. Dickerson that there needs to be communication with residents, letting them know the exact dates and time frames of when the cleanup occur.

Karen Vilandry, president of the Hands Across the River Coalition (HARC) spoke up about her concerns regarding the cleanup. She asked if the residents near Marsh Island would be notified.

Bill Roth, Director of Planning and Economic Development in Fairhaven, explained that some residents in the area received a letter from the Selectboard, as well as a question and answer sheet and a copy of a colored map showing the areas of cleanup.

Ms. Vilandry also expressed concern with the possibility of PCB’s getting “kicked up into the air.” She is also concerned about the time of year the EPA will be conducting the cleanup.

She said they should do the cleanup in the winter when residents will have their windows closed, that way if PCB’s are leaked into the air, they cannot travel into homes.

Mr. Dickerson said they hope to begin the cleanup in late summer to early fall.

Ms. Vilandry suggested that something be posted in the Fairhaven Neighborhood News to notify the public of the cleanup, as well as the time frames in which it will take place.

“The prime concern is public health,” Ms. Vilandry said. “We just want to know that the PCB’s are being removed safely.”

The Selectboard approved the standard access agreement to allow the EPA/NOAA access to Marsh Island, but EPA run a notification in the Fairhaven Neighborhood News and The Standard Times about when the cleanup will occur.

In another matter, the Selectboard accepted a letter of resignation from Debra Charpentier from the Historical Commission. Ms. Charpentier stated in her letter that it was an honor and privilege to serve for Fairhaven for 25 years and if help is ever needed to contact her at anytime.