At their meeting on Monday, 6/6, the board praised Det. Cudmore, who is currently assigned to the US Drug Enforcement Administration Task Force.

One case involved a major drug dealer by the name of Francisco Monteiro who was running a heroin trafficking ring. After an extensive investigation, Mr. Monteiro was convicted and sentenced to 21 years in federal prison.

The second case involved a disgraced and disbarred former attorney named Edward Boyer who had millions of dollars in marijuana shipped here from California. He was convicted and sentenced to nine years in federal prison.

“Det. Cudmore was one of the main investigators in both cases, who earned much deserved praise from the U.S. Department of Justice, as well as the continued respect from our department,” reads a statement from the Fairhaven Police Department. 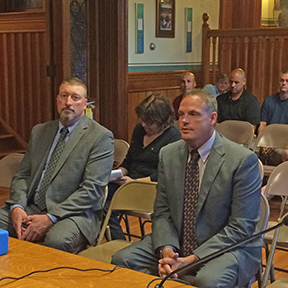 Fairhaven police chief Michael Myers appeared before the board with Det. Cudmore.

“You’ve taken some really bad people off the streets,” said Selectboard member Dan Freitas. “I can’t thank you enough for the work you do. You guys deserve all the recognition you get.”

Selectboard chairper­son Charles Murphy said that Det. Cudmore’s “important work” saves lives, and it helped to get “bad people off the street.”

Mr. Murphy also thanked Det. Cudmore’s family for putting up with the long hours and other demands of the job.

Town Administrator Mark Rees said that he has been “very much im­pressed” with the FPD and said it was due to the leadership of Chief Myers.

Det. Cudmore took a moment to thank his fellow Fairhaven police officers and detectives for their work on the cases he was recognized for.

Chief Myers added that most people do not realize how much work  is done “behind the scenes.”

In another matter, the board responded to criticism and concerns from a group of neighbors seeking to block the Environmental Protection Agency from gaining access to town property on the shore near Veranda and Oxford Streets. The EPA is seeking to test soil for PCB (polychlorinated biphenyl) contamination. Planning and Economic Develop­ment Director Bill Roth, and Town Administrator Mark Rees both recommended that the board approve the request.

Mr. Roth told the board it was a standard procedure that the board had routinely granted in the past.

Karen Vilandry, president of the Hands Across the River Coalition, and several neighbors, urged the board to deny the EPA’s request.

They cited concerns with remediation if any contamination is found. Neighbors said that the original language in the EPA’s request form for going on private property scared many of them into denying access. According to neighbors, the language made it clear that they will be responsible for cleanup and that the EPA will descend upon the properties with big equipment to remediate.

Ms. Vilandry asked that the board request EPA representatives attend a meeting to answer property owners’ questions before granting access.

“It’s something you owe the taxpayers,” said Ms. Vilandry.

“Why can’t they do it from the water,” asked one resident.

Resident Bill Cusson said his property abuts the town land. He said it is a nice piece of property that the EPA will ruin with a fence and big equipment and people in hazmat suits.

“We’ve been dealing with them for years,” said Mr. Cusson, making it clear that neighbors did not trust the EPA.

The harbor has been getting dredged in various areas for about two years. One project is to deepen the channel and expand one of the terminals.

The other project, which is the big bone of contention, is the creation of Confined Aquatic Disposal Cells (CAD Cells). The large holes in the harbor are being created to deposit PCB contaminated dredging material. Several are planned throughout the harbor, with one near Oxford Village in Fairhaven. Proponents say it is the best and least expensive way to clean up the harbor. Opponents say it does not clean up the harbor, it simply moves the PCBs closer to homes and eventually the PCBs will escape the unlined holes.

“All I know is, from day one, it’s been an absolute nuisance,” said one neighbor, adding that although limited hours were promised for dredging, it has been going on 24-7 for months. “My life has been very compro­mised by this.”

Board members discussed the possibility of putting conditions on their approval.

Selectboard member Dan Freitas said the EPA should tell people when they are going to do the sampling and should not move any heavy equip­ment to the area without notification.

Board members also discussed various ways to notify the neighbors of any news.

Mr. Roth said it was very labor intensive and had to be done by hand when he notified neighbors for the meeting. He said he had to go to the Assessor’s map, make up the list and then print out labels. There is no way to get the list from Assessor’s to his computer, he said.

The board also acknowledged that only abutters would be noticed, in any case.

The board decided they would notify HARC and put a notice in the newspaper to notify neighbors of any changes.

“I would prefer they never step on shore, because the results could be disastrous,” said William Cotter, who added that property values had already suffered from the dredging and would not recover if people in hazmat suits started digging up the shore with big equipment.

Ms. Vilandry emphasized that the sampling was “premature,” and should be done after the dredging is done.

Board members seemed to favor having sampling done now, in the middle of the summer, and at the end of the dredging.

Ms. Vilandry said the dredging itself would cause an increase in the results.

“They cannot be trusted,” said Ms. Vilandry of the EPA, asking that the board just postpone the approval until the EPA can answer questions in a public forum.

In the end the board delayed approving the access. They will try to schedule a meeting with EPA officials at a meeting in July.

The board made it clear they would not allow a re-hashing of the CAD Cell concept, but only a discussion on the sampling request.

The board asked for residents to submit questions ahead of time, in writing, to the Selectboard.

In another matter, the board read a letter from Dr. Shigeaki Hinohara, notifying the town that the Society for Whitfield-Manjiro Friendship House in Japan has been dissolved. The agency donated much-needed funds for the Whitfield-Manjiro Friendship House and Museum on Cherry Street in Fairhaven to be renovated. The house was the home of Manjiro Nakahama, the first Japanese person to live in the United States.

Dr. Hinohara noted that he will turn 105 on October 4 of this year, but he still hopes to visit Fairhaven again.

The Manjiro Festival is held on alternating years in Fairhaven and Tosashimizu in Japan. This year’s festival is in Japan.

In other business the board:

• Announced a vacancy on the Zoning Board of Appeals, requesting letters of interest be sent by 6/10. (See story on page 7.)

• Appointed Building Inspector Wayne Fostin as the enforce­ment agent for Section 125 of the town bylaws, which regulates garages, service stations and unregistered motor vehicles. Mr. Rees said that the bylaws were clear on enforcement for some areas, but  section 125 required a specific appointment by the Selectboard.