The Fairhaven Selectboard took time to welcome Terry Cripps back as the Animal Control Officer at its meeting on Monday, 9/18. Mr. Cripps has been working on an interim basis after the unexplained and removal of Kelley Massey from that post earlier this year. Mr. Cripps served as ACO a couple of years ago. The job has undergone some changes since then, the most significant being that it is now under the jurisdiction of the police department and not town hall.

Town Administrator Mark Rees said that Mr. Cripps did a “wonderful job” as the interim ACO, so he should do a greta job as the permanent ACO.

The appointment was made by Police Chief Michael Myers and approved by Mr. Rees.
“He did a great job last time,” said Selectboard member Charles Murphy. “I’m confident he’ll do an even better job this time.”

Seletboard member Daniel Freitas brought up the issue of the wild turkeys that have been a nuisance on Adams and Francis Streets.

Mr. Cripps said that the state had come in and taken away two of the Tom Turkeys that had been getting aggressive with neighbors.

Mr. Cripps also took the time to thank the animal shelter volunteers. He said he had some new volunteers and got some of the old ones to return.

“Volunteers are the backbone of our operation,” said Mr. Cripps, adding that the shelter could not exist without them.

He also made a plug for a fund-raiser he is holding on October 7 to raise funds for roof repair. He said the shelter has some water leaks and also has some electrical issues. 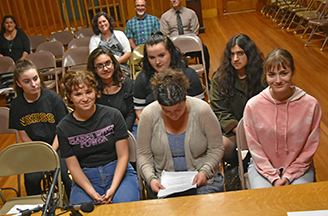 Students in the Fairhaven High School Art Club and their advisor Jamie Lynch (front row, middle), appear at the Fairhaven Selectboard meeting on 9/18, to talk about the Rogers School mural project they created, and to receive a proclamation from the board. Photo by Beth David.

The board also met with Jamie Lynch, Fairhaven High School Art Club advisor, and most of the students who created the mural at the Rogers School (see 9/7/17 issue).

Ms. Lynch said that the project was the first of its kind for the art club. Students had to work on it in quarters because it was so big. The mural is 50 feet wide by 8 feet deep. It covers up broken windows at the Rogers School. The scene depicted is of the Rogers School building and lots of colors inspired by Vincent van Gogh’s Starry Night.

“It was amazing,” said Ms. Lynch about the amount of work it took. Because of the scale of it, it took four months to complete.

She said they learned per­severance and got real world experience, including how local government works, because they had to get approval to have the mural placed on the building.
They had to work with Town Planner and Economic Development Director Bill Roth to navigate the process.

Mr. Roth came up with the idea and helped do some painting in the end so the project would be finished before school ended.

He said he thought of the idea when he realized he would have to put plywood up to block the windows that were broken and being targeted by vandals.

Rather than “add insult to injury,” he spoke with Mr. Rees and they agreed to give it a try.
He said Ms. Lynch agreed quickly, but had a feeling she did not quite realize how big 50×8 really was. He said when the project was laid out on the gymnasium floor it was “impressive.”
“I got goose bumps,” said Mr. Roth, about when he saw it going up on the building. “I was speechless.”

“It gave everyone an enormous sense of pride in the finished product,” said Ms. Lynch, and pride in the community.

Mr. Freitas said the building was “looking sort of dumpy.”

“You guys brought some life back to it,” said Mr. Freitas.

He said it was something that people could “actually go and look at.”

Mr. Murphy showed the before and after pictures.

“It makes a world of difference in our community,” said Mr. Murphy, and showcases the talent of young people.

“It was a great collaborative effort,” said Selectboard Chair Bob Espindola. “Art should be a big part of education.”

Ms. Lynch said that art is important at FHS because of the support of the community.

Mr. Roth and Ms. Lynch both said they would like to create other works of public art.

The Rogers School has been empty for several years now and the town has been struggling with what to do with it. The building was donated by town benefactor Henry Huttleston Rogers and every idea for its re-use has created controversy.

“It looked so bad,” said Mr. Roth, but by the end of the day that part of the building was transformed. “It’s a positive thing on something that’s not that positive right now.”

The board presented a proclama­tion to each of the students.

The Selectboard also briefly discussed the future of the Rogers School, deciding to “mothball” it until a decision is made. There is some water leaking and other problems with the building.

The board will be discussing reports by consultants on possible uses, zoning changes, and other ways for the town to maintain ownership of the building, while getting some use back into it.

In other business, the board also set the budget calendar for next year’s budget and town meeting articles; and discussed changes in personnel for the Building, Health and Cable TV Departments.